The White House Keeps Tripping Up on the Truth. President Trump Doesn't Seem to Mind

Mike Pence is not prone to winging it. A lawyer-by-training and cautious politician-by-habit, Pence was preparing for a series of interviews and wanted more information. So Pence, then the Vice President-elect, picked up his phone on Jan. 14 and called up the man who would have the suite of offices next to his in the West Wing.

Of incoming National Security Adviser Michael Flynn, Pence asked: What were people talking about when they mentioned Flynn’s conversations with Russia’s Ambassador to Washington? Did Flynn tell Sergey Kislyak that the Trump team would lift the sanctions that President Obama had just put into place, as some were reporting?

What happened next showed a developing problem for the Trump Administration, and one that appears it won’t be resolved soon: A culture of misinformation and falsehoods that hurts the White House’s credibility and breeds mistrust among key players inside.

Flynn told Pence there was nothing to these rumors. They were merely efforts to hurt the incoming President, Donald Trump, and they would die out. That satisfied Pence, who relayed that message to several news organizations on the weekend before the Trump team assumed power. Pence brushed off the questions as “bizarre rumors that have swirled around” Trump. “I can confirm those elements were not a part of that discussion,” Pence told CBS News’ Face the Nation.

Weeks later, Pence was starting to doubt that he fully understood the whole story, or that Flynn was completely forthcoming with facts. Now settling into his office on the western front of the West Wing, with Flynn a few steps away, he started asking his aides to double-check some of Flynn’s assessments. None of the answers left Pence with much confidence. Beyond his faith in God, Pence isn’t one to blindly trust.

By Thursday night, Pence knew for sure they had a problem. The Washington Post, based on interviews with nine officials, confirmed Flynn had in fact implied to the Russian Ambassador that the Trump Administration would take a kinder view of Moscow than did President Obama and economic penalties could be eased. Several officials questioned the legality of the communication, seeming to circumvent the still-in-power Obama Administration which had imposed the sanctions in response to Russia’s interference in the 2016 elections.

Flynn initially denied that he had made those overtures, both to reporters and to White House colleagues. Later, an aide said Flynn did not recall making them, seeming to soften the absolute denial. Some inside the White House were livid. The Flynn statements that they were merely exchanging Christmas greetings seemed a bit flimsy now.

For a White House so bent on discrediting the media, they were facing a problem at home. These errors haunt Administrations, and there seemed to be no consequences.

Pence was stewing silently, according to two White House officials who demanded anonymity in order to discuss the sensitive internal matter. One of those officials said Pence had ordered an informal investigation into how and why Flynn had misled the Vice President and, through him, the country. Had Pence been better informed, he could have dodged the questions or obfuscated, rather than put his credibility on the line for an aide who has dragged controversy at his side for a long while. Pence’s reputation as a straight shooter stood to be dinged, so Pence told his aides to spread far and wide that Flynn was responsible for not telling the Vice President the truth.

This goes beyond the palace intrigue—and there has been no shortage of that Washington staple in the three weeks since Trump assumed office. Rather, it goes to the very serious questions about how the Trump White House tells its version of truths and then confronts incorrect information that it shares.

The Flynn revelations are embarrassing and come after months of speculation about how, exactly, Trump and his advisers view Russia and its leader Vladimir Putin. Just days after moving into the White House, the Wall Street Journal published a bombshell report that Flynn was the target of counterintelligence operations at the FBI, CIA and the National Security Agency over his contacts with Russia. Trump brushed it off at the time. He has a tendency to trust Generals, and Mike Flynn was his kind of General.

Even so, White House officials are increasingly impatient with Flynn. “This was not Flynn’s first (screw) up,” one official told TIME.

Nor was Pence the only person to get tripped up by trusting Flynn. White House chief of staff Reince Priebus told NBC’s Meet the Press that he had also asked Flynn about the calls with Russia and was assured sanctions did not come up. White House press secretary Sean Spicer, too, had issued denials of reports about Flynn’s calls with the Russians. Both of those individuals trusted Flynn to tell them the truth, and apparently he did not.

But the headache goes beyond Flynn, who was in the front row of the formal East Room of the White House when Trump welcome Japanese Prime Minister Abe on Friday and joined the world leaders on a weekend trip to Trump’s Mar-a-Largo estate in Florida. Now, ending its third week of work in the storied West Wing, the Trump team is increasingly tired and having trouble relaying a cogent—and honest—series of facts about its actions in public.

The boss with the office shaped like an oval doesn’t much mind the chaos stemming from poor press relations, and Trump’s supporters cheer on efforts to delegitimize the media. “Fake news” is the new way to deride any report that doesn’t champion Trump. Trump has no problem dashing off tweets that are not grounded in facts.

But Trump’s aides are not making this easy on themselves. Take White House counselor Kellyanne Conway, who had repeatedly cited the non-existent “Bowling Green Massacre” to justify the Administration’s efforts to ban some immigrants and refugees. (She clarified it later.) She also coined “alternative facts” as a euphemism for her spin on a situation.

Spicer invoked an Atlanta terror attack that didn’t happen. (He meant Orlando.) He also was forced to go before the White House briefing room to defend Trump’s unfounded claim that millions of votes were cast illegally in November. “The President does believe that,” Spicer said under repeated questioning.

More broadly, there is a deep distrust of what these officials are saying from their perches of power. Conway used a visit to the briefing room to do television interviews—and in the process plugged First Daughter Ivanka Trump’s fashion brand in violation of ethics laws. She and Spicer sparred with CNN over whether she had declined a Sunday show appearance or the cable network had passed her over, while Spicer saw his performance memorably lampooned on Saturday Night Live in a sketch that may have hurt him with his boss.

For the moment, Trump has the backs of his aides, including Flynn. Conway apologized to Trump for the Ivanka episode and he accepted it. All three have spent considerable time with the President this week.

And officials say Pence is likely to let the Flynn affair pass in coming days. The Vice President simply has too much going on to fret over someone misleading him, and it’s not as though he would ask Trump to pick sides. As the official rightly noted: Flynn can be fired, and Pence cannot.

Maybe some of this could be avoided if there were a tweak at the top. The White House is without a communications director, a role with a benign title but one that, in a typical White Houses, plays a vital role in planning the White House’s strategy on press and policy. Spicer has been assuming that portfolio at the moment, but he’s already in a pressure-cooker job with little bandwidth for the tough, long-term planning that the communications czar requires. Conway has been helping out, but there’s little point in sketching out too many details in a White House where the President is messager-in-chief.

If Trump wants to continue scripting this drama, perhaps he is the only one who can change this arc.

– With reporting by Zeke J. Miller 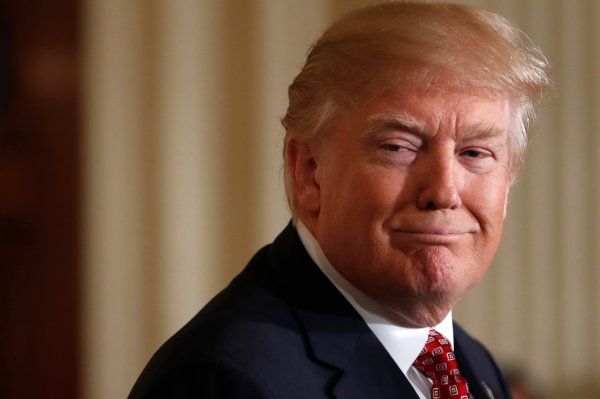 Trump Confident on Travel Ban, But Aides Eye a Do-Over
Next Up: Editor's Pick