After sweeping rains in the Los Angeles area—and with more storms on the horizon—the sun came out for the Women’s March in Southern California on Saturday. Hundreds of thousands of people clogged the city streets, sardined together for hours as the masses oozed from Pershing Square toward City Hall and back again.

Like marches in scores of other cities around the country, this event was coordinated with the national organizers behind the Women’s March in Washington, D.C. But it had its own La La Land character. The area was lousy with celebrities—from Jamie Lee Curtis to Natalie Portman to Miley Cyrus—and had strong representation from immigrants, whom local politicians have vowed to protect in what many feel are uncertain times.

“Right now there’s a threat of us regressing back in history,” said Camila Alvarado, a Colombian-American and documentary film maker who lived for in the U.S. for several years as an undocumented immigrant. She attended the march, she said, “to support equal rights for all, for women, for minorities, for white people, for black people.”

The Los Angeles Police Department estimated that the march drew 500,000, but organizers said the number was higher, according to the Los Angeles Times. Trains and buses, packed to the walls, had to bypass crowds of people trying to get to the march in the morning. People reported on social media that Uber rides to Pershing Square from some parts of the city were estimated to cost more than $150, given the outsized demand.

Organizers said the massive event was not meant to be “anti-Trump” or even a protest. “It really surpassed the election,” said Dove Rose, an energy healer who got involved in organizing the L.A. march days after Hillary Clinton lost the election. “It is a peaceful movement showing that we have each others’ backs.”

As the collective consciousness of liberal California has gone through stages of shock and anger, those emotions have galvanized into a determination to do something among many groups dedicated to leftist causes. Though what that “something” might be in the long term remains unclear, the march provided a goal for them to focus on as the first days of Donald Trump’s presidency grew near.

“In a time when we are all wondering what we can do, we can do this,” said Deena Katz, one of the producers of the event. “We became so charged by the positivity of creating the march,” said Rose, “that it healed a lot of people’s pain.” The pain will still evident in seas of signs. “My rights aren’t up for grabs, and neither am I,” said one of many referencing controversial statements made by Trump in a leaked Access Hollywood tape.

Many did carry messages of hope and solidarity (“Love Trumps Hate”), but just as many carried messages of defiance, particularly toward the man who was sworn in as the 45th president 24 hours before (“Repeal and Replace Donald Trump”). Groups of women wore pink hats—so they’d be visible to the helicopters hovering above—and pink trench coats. Others carried pink balloons that were decorated with the words “Feminist as f—.” Many women said they were at the march to support women’s rights and reproductive rights, after an election that brought debates about misogyny to the national stage for several months.

Overwhelmed by turnout, the march that was scheduled to begin at 10 a.m. was delayed for almost an hour. Chants like “Women’s rights are human rights” gave way to “March! March! March!” and “Go that way!” as some people, pinned in place, struggled to even get their arms in the air for selfies. People started gathering around 8 a.m. for an event expected to last all day.

Thousands of men joined women to show support. And many came as families, like Hannah Waldman, a consultant who is pregnant with a daughter and was accompanied by her 5-year-old son, Leonard. “I want him to feel the energy, and I want him to see that people care about this,” Waldman said, as her boy held a bright green sign that said “My body, my choice!”

But she was there to send a message to Trump, too. “ I want him to know we’re not going to sit back for four years,” she said, “and just watch while he strips away essential, basic rights.”

Correction: The original version of this story misstated the name of one of the organizers of the Los Angeles Women’s March. She is Dove Rose, not Dove Rain. 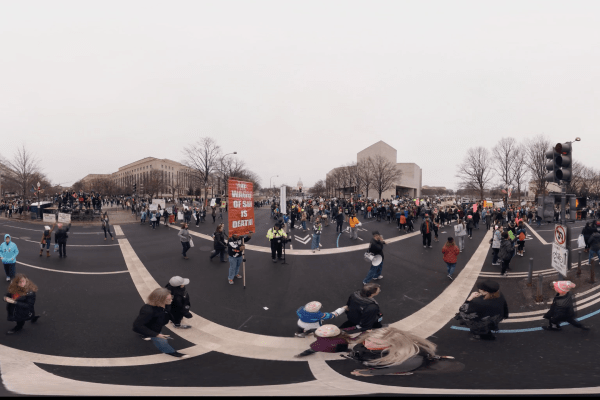 Walk With the Women's March on Washington in 360-Degrees
Next Up: Editor's Pick