What You Need to Know About Scott Pruitt, Trump's Pick for EPA

President-elect Donald Trump has chosen Oklahoma Attorney General Scott Pruitt to lead the Environmental Protection Agency (EPA), placing someone who questions the science of climate change—and who has fought the agency as a state official—in charge of protecting the environment.

The planned appointment, first reported by Reuters citing sources in Trump’s transition team, is certain to encourage the oil and gas lobbyists who Pruitt has helped during his six years as Oklahoma’s chief lawyer. Pruitt has played a key role in prosecuting a legal fight against President Obama’s Clean Power Plan, his central strategy to fight climate change, in addition to other environmental regulations.

Pruitt—who has received more than $300,000 in contributions from fossil fuel industry since 2002—is also a member of an alliance of Republican attorneys general who have united with the energy industry to fight President Obama’s environmental regulations, according to a 2014 New York Times report. In one case as attorney general, he sent a letter confronting the EPA using nearly exact language sent to his office by industry lobbyists.

If confirmed, Pruitt would mark a sharp departure from the EPA of the Obama era, which has issued a slew of rules aimed at combatting climate change, promoting renewable energy and energy efficiency and targeting public health. Pruitt has said that many environmental protection issues would be better handled at the state level. And, much like the president-elect who plans to nominate him, Pruitt has questioned the science of man-made climate change, calling the issue “far from settled.”

Pruitt’s nomination has drawn sharp criticism from environmentalists concerned that he would not fulfill his responsibility to oversee implementation of laws and regulations aimed at combatting global warming. “Scott Pruitt has built his political career by trying to undermine EPA’s mission of environmental protection,” said Fred Krupp, president of the Environmental Defense Fund, in an emailed statement. “He is a deeply troubling choice.”

But worried concerns environmental groups about Pruitt is likely exactly what appealed to Trump. The President-elect has called global warming a “hoax” created by the Chinese government and called to “scrap” many existing environmental regulations. At times, Trump has called for the elimination of the agency. He later backed off that proposal, and since his election has sometimes sent more conciliatory signals on climate change—most recently meeting with Al Gore on Monday, who called the experience “lengthy and very productive.”

But who Trump meets with and what he might say to the media matters much less for environmental policy than who he picks to lead agencies like the EPA and Energy. On his own LinkedIn page, Pruitt has suggested that EPA’s role should be curtailed, writing that he “led the charge with repeated notices and subsequent lawsuits against the U.S. Environmental Protection Agency for their leadership’s activist agenda.” 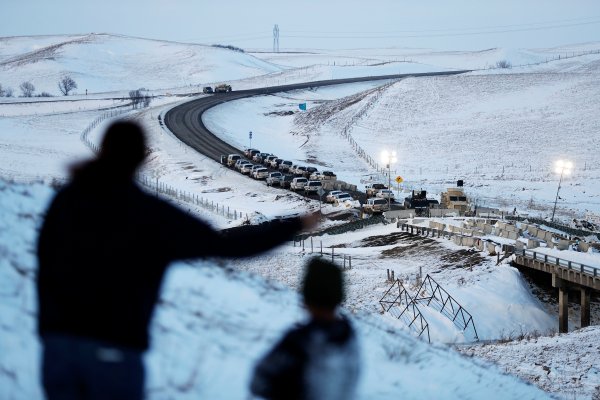 What’s Next for Dakota Pipeline
Next Up: Editor's Pick