Why You Shouldn’t Feel Guilty About Ditching Your Fitbit

If you’ve ever taken off your fitness tracker “for just a few hours” and found it months later in the back of a drawer, you can surely relate to this: Researchers are studying why people stop using Fitbits, and the emotions they experience—from guilt to freedom—when they give them up. The researchers hope their findings will show that there’s no “right” way to track health and fitness data, and help developers create devices that will ultimately be more useful for consumers.

For their new study, computer scientists at the University of Washington surveyed 141 people who had previously used Fitbit but had since stopped. Half said they felt guilty or frustrated about their lapsed use, and nearly all of those who felt that way said they’d like to return to tracking.

About half of those who felt guilty said they’d stopped tracking because they lost their Fitbit or did not replace it after it broke. The rest said they lacked motivation to stick with it, or kept forgetting to use their device.

As for the other half—those who didn’t feel guilty for abandoning their Fitbits—45 participants said they had “conflicting feelings” about stopping, and were ambivalent about the prospect of starting again. Five people said they’d learned enough about their habits in the time they used their Fitbits, and 21 said they got no value out of tracking, found it annoying, or struggled to connect the data to actual behavior changes.

When the researchers made various recommendations about going back to tracking, those who felt guilty were very receptive to them. But those who had already gotten what they had wanted out of self-tracking felt those same suggestions were judgmental and unhelpful.

Health.com: 3 Unexpected Things Your Fitbit Can Tell You About Your Health

A previous study from the same group of researchers found that many people who gave up fitness trackers experienced no real difference in their lives. Some, however, experienced guilt for not keeping up with their habit, while others felt “relief from the tyranny of self-tracking,” the researchers said.

The new results, presented at the Association for Computing Machinery’s 2016 International Joint Conference on Pervasive and Ubiquitous Computing, show that one-size-fits-all tracker designs lead to missed opportunities for serving different types of users, the researchers say.

“Right now self-tracking apps tend to assume everyone will track forever, and that’s clearly not the case,” said co-author James Fogarty, PhD, an associate professor of computer science and engineering, in a press release. “Given that some people feel relief when they give it up, there may be better ways to help them get better value out of the data after they’re done, or reconnect them to the app for week-long check-ins or periodic tune-ups.”

Most of the researchers’ advice is aimed at developers and marketers of these tracking tools. The study wasn’t set up to determine the best ways to use the tools that are currently on the market, says co-author Sean Munson, PhD, an assistant professor of human centered design and engineering. But, based on its findings, he does have some thoughts for consumers.

When shopping for a tracking technology, Munson encourages people to consider the balance of “benefits and burdens.” Some tools have fewer features, for example, but they’re easier to keep charged.

If you tend to forget to take extra devices with you (or don’t want to wear them as accessories) every day, smartphone apps—like the iPhone’s built-in step counter—may be a good choice for you. “This is especially true if you just want to check in on your activity level and don’t find that you need badges or social competitions to be motivated,” he says.

People looking to better understand and fine-tune their routines, on the other hand, might consider a tracking tool that combines activity data with other information, such as GPS location. (Munson recommends the smartphone app Moves to keep track of separate trips throughout the day.) “This is nice if you wonder things like, ‘How much do I walk in my commute?” or ‘How far do I walk to get between different buildings at work?’” he says.

If comparing yourself to friends or family members is important, he says, it can help to join a tracking network (like Fitbit or Strava) that your friends and family are already using.

And if you want to track more than just walking and running—or you don’t usually keep your phone on you while exercising—you’ll probably need a dedicated tracking device. From swimming to weight lifting, there are options on the market that track all kinds of movements, so consider what activities you’ll be doing before you buy.

Health.com: The Best Bluetooth Headphones for Working Out With Your iPhone 7

Finally, Munson says, try not to feel bad about how—or how often—you use your tracker. “We can see that different strategies work for different people,” he says. For example, some people like to use trackers short-term until they’ve reached a goal, while others like to check in occasionally.

“I don’t typically pay a lot of day-to-day attention to my step data,” he adds, “but I benefit from checking in the fall, when my job gets busiest, the hiking season ends, and the rain returns to Seattle.”

Munson thinks people should feel free to try each of these approaches, rather than feeling like they’re “supposed to” use their devices in a certain way. And if you still feel guilty about all that time that tracker spent in your desk drawer? Go ahead, give it another shot. 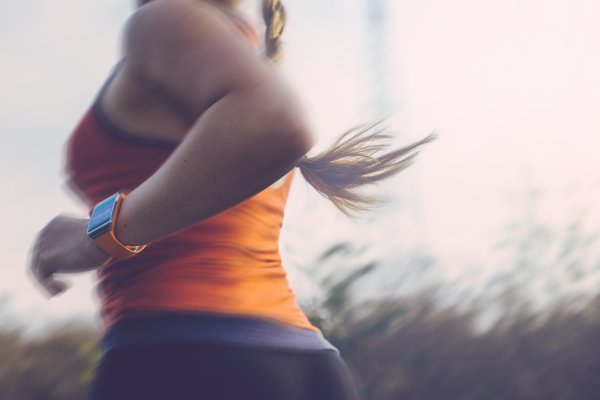 Your Wearable Won't Help You Lose Weight
Next Up: Editor's Pick