The infamous feud between Jimmy Kimmel and Matt Damon may technically be fake, but that doesn’t make it any less entertaining. In the 13 years since its inception, the bit has evolved from an improvised one-liner to a series of elaborate segments, resulting in one of the most popular late night gags ever.

It all began during the third season of Jimmy Kimmel Live! when the host off-handedly ended a discouraging show by apologizing to Damon for bumping him from the episode. After the joke got a laugh from one of his producers, he started doing it every night.

“We had a bad show…The guests were bad, and I was feeling pretty bad about myself at the end of the program,” Kimmel told NPR in 2013. “And I decided to say, for the amusement of one of our producers who was standing next to me…’I want to apologize to Matt Damon. We ran out of time’…And he got a kick out of it, the producer, so I just started doing it every night to amuse him.”

Kimmel went on to explain that there was no particular reason he chose the Bourne actor. “Matt Damon was just the first name that popped into my head. I was trying to think of an A-list star, and somebody we absolutely would not bump if he was on the show…The legs on this bit are unbelievable to me. I mean, people laugh every time I say it…Repeating the same joke every single night, you’d think eventually people would get tired of it, but they don’t.”

After this went on for around a year, Damon was invited to appear on a 2006 Live! primetime special for a staged fight with Kimmel. “I knew you were going to f—king do it,” Damon shouted as the credits rolled. “Oh, big funny, big f—king laugh!”

In 2007, Kimmel decided to pay Damon back for his onscreen blowup by enlisting his sidekick Guillermo to oust the actor from his own movie, The Bourne Ultimatum.

The bit really found its legs in 2008 when Kimmel’s then-girlfriend, Sarah Silverman, and Damon teamed up to create the viral music video genius that was “I’m F—king Matt Damon.” Silverman appeared on Live! to present the song to Kimmel as a surprise, resulting in a clip that has been watched nearly 20 million times on YouTube.

Kimmel couldn’t resist clapping back with a similar video in 2009, starring the special someone in Damon’s life, Ben Affleck.

During a 2010 Academy Awards night sketch in which Kimmel was voted out of The Handsome Men’s Club by the likes of stars such as Matthew McConaughey, Rob Lowe and even Affleck, it was revealed that Damon was the mastermind behind his eviction.

Finally, in 2013, Damon found a way to get the airtime he felt he deserved—by hijacking Kimmel’s hosting gig.

After the takeover episode, Damon was invited to guest on the show with the cast of The Monuments Men. However, when Kimmel eventually got around to asking him a legitimate question, the fire alarm mysteriously went off before he could answer.

The duo eventually attempted to work through their differences in a session of couples counseling in 2015—it was unsuccessful.

So Kimmel was all the more fired up when Affleck snuck Damon onto the Live! stage after the 2016 Oscars.

Damon went undercover to reignite the feud in July, disguising himself in a mullet and sunglasses to infiltrate a segment in which Kimmel’s Aunt Chippy was playing blackjack to win money for Live!’s studio audience.

Following that incident, the pair returned to couples therapy in a last-ditch attempt to salvage their relationship.

But when Kimmel took offense to comments Damon made about him to Jimmy Fallon on The Tonight Show, the rivalry raged on.

Damon bounced back quickly, launching an attack ad against Kimmel’s vice presidential campaign that the Live! host denounced during an August episode.

He then followed that up with a surprise appearance onstage at the Kimmel-hosted Emmys to taunt his nemesis about his loss to Last Week Tonight’s John Oliver in the Outstanding Variety Talk Series category.

After Kimmel expressed his hope for Damon to lose at the 2017 Oscars—which the late night pundit hosted—the actor retaliated once again by disguising himself as Tom Brady to sneak onto Live! following the New England Patriots’ win at Super Bowl LI.

Damon added fuel to the fire by hinting at a potential showdown on Oscar night. “I’ll only do something if he starts up something,” he told Vanity Fair. If he starts any trouble, I’ll have to fight back to defend myself!”

Of course, Kimmel didn’t wait too long before he posted a photo of himself defacing the actor’s seat card leading up to the awards show. “Best Picture Vominee Matt Damon,” he captioned the shot.

Things got rolling early on Oscars night, with Kimmel aiming his first shot at Damon’s recent choice in roles during his opening monologue. “Matt could have starred in Manchester by the Sea…He could have taken that lead actor part for himself, but he didn’t. He gave that role to Casey Affleck, his childhood friend,” Kimmel jokingly praised. “He handed what turned out to be an Oscar-caliber role over to his friend and made a Chinese ponytail movie instead. And that movie, The Great Wall, went on to lose $80 million.”

Damon responded to the affront by attempting to trip Kimmel as he walked through the audience.

Then, as a lead-up to Damon presenting the award for Best Original Screenplay alongside Ben Affleck, Kimmel aired a pre-taped tribute in which he reminisced about the first time he saw the actor’s 2011 flick We Bought a Zoo—in a completely empty theater. “The thing about Matt is that you can see how hard he’s working, it’s so effortful for him,” he mused.

And the abuse didn’t stop once Damon took the stage, with Kimmel having the announcer introduce him as “Guest” before directing the orchestra to play him off every time he tried to speak.

The night following the ceremony, Kimmel took to his own show to reveal he had intended to close the night with a final bit that involved him sitting in the audience next to Damon (a loser, according to Kimmel). However, his plan was derailed when he had to take the stage to help clear up that whole Best Picture mix-up.

He then made up for the missed Oscars opportunity by forcibly bumping Damon from a voiceover gig in a (fake) United Airlines commercial that spoofed the airline’s overbooking crisis. “In some cases, some people deserve to get bumped,” Kimmel joked.

However, after Kimmel’s newborn son — William “Billy” Kimmel — underwent open heart surgery at just three days old, the feud was put on pause for the first time since it began. “Every one of my friends was there 100%,” Kimmel said while telling the emotional story on Live! “We had atheists praying for us, okay? We had people who do not believe in God praying for [our son]. And I hate to even say it, but even that son-of-a-b-tch Matt Damon sent flowers.”

Unfortunately, the peace didn’t last for long. When Chris Hemsworth appeared on Live! to promote Thor: Ragnarok, he revealed that he had brought his co-star Mark Ruffalo and director Taika Waititi with him. But when Kimmel sent a camera backstage to chat with them, he found Damon lying in wait. “It’s the mighty Thor not the mighty bore, so maybe take a walk,” Kimmel told him.

Damon then crashed George Clooney’s interview on Live! for a mock debut of the actor’s twins with wife Amal Clooney. “I just want to make something very clear right now: they’re cheering for the babies, not this person,” Kimmel said as Damon walked onstage.

Damon may have only shown up in a montage dedicated to movies about the military at the 90th Academy Awards, but Kimmel still had jokes: “On the behalf of the Academy, I want to apologize to our great U.S. military men and women here and overseas for including Matt Damon in that montage. You deserve better than that. You really do.”

Kimmel then went after Damon for his portrayal of Supreme Court nominee Brett Kavanaugh on the 44th season premiere of Saturday Night Live. “Kavanaugh’s testimony rubbed a lot of people the wrong way. In fact, he was so unlikeable that Saturday Night Live had no choice but to cast the most repugnant actor in the world to play him over the weekend,” Kimmel said. “What a surprise that Matt Damon would have no other plans on a Saturday.”

One week later, Kimmel celebrated Damon’s 48th birthday by wishing him a happy 60th. “The big 6-0. I have to admit he looks pretty good for 60,” Kimmel said. “This year for his birthday, Matt wished for the same thing he wishes for every year: talent.”

Although it seemed like Kimmel and Damon managed to bury the hatchet while watching Game 5 of the 2018 World Series — the two were spotted together at Dodger Stadium in red and blue versions of the same “I’m with stupid” t-shirt — Kimmel had a different take on the matter. “Let me tell you something,” he said on Live! the following night. “There’s nothing worse than paying a lot of money for tickets and having to sit next to an obnoxious jerk the whole game. And that is the last time I ever use Groupon again.”

But while their fans got a kick out of the shirts, Ben Affleck — who joined Kimmel and Damon at the World Series — wasn’t too fond of the stunt. During a February appearance on Live!, Affleck shared a widely-circulated photo of the trio sitting together in such a way that both Kimmel and Damon’s “I’m with stupid” arrows were pointed at him. “Two guys got to go with stupid to the World Series,” he quipped. “Which I appreciate.”

“Well, maybe next time don’t bring him,” Kimmel retorted in regard to Damon. “He ruins everything.”

The most recent retaliation came from Kimmel, who enlisted Tom Brady to throw a football through the window of Matt Damon’s house during a May appearance on Live! Since Damon just so happens to be a huge New England Patriots fan, this prank was particularly distressing for him. “Sorry about that,” Kimmel told him. “My friend Tom threw that. We’re just seeing how strong his arm is and turns out it’s real strong. Went right through the window your house. That’s how strong his arm is.” 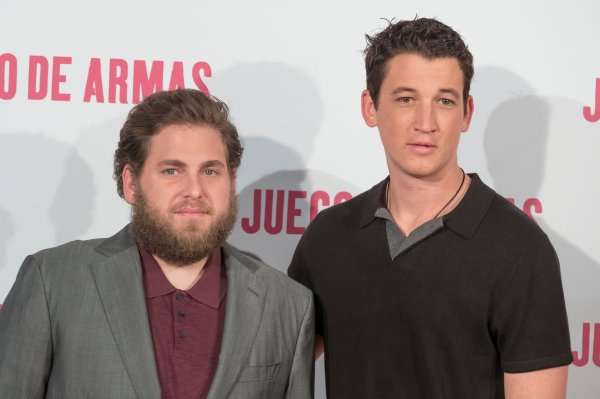 Jonah Hill Really Didn't Like Being Mocked by a French TV Presenter
Next Up: Editor's Pick