These Are the Historical Figures in Hillary Clinton's Victory Video

Hillary Clinton claimed victory on primary night Tuesday as the first woman to be a major party’s presumptive nominee for president. To emphasize the historic nature of the former Secretary of State’s achievement, her campaign released a video called “History Made” that pays homage to the American women throughout history who paved the way for Clinton’s achievement.

Though the video pulls from some of Clinton’s own best-known speeches and pulls in the voices of several 21st-century activists—like women fighting for the rights of transgender people and immigrant communities—its focus is on the women of the past, going all the way back to the earliest days of the American push for equal rights, and equal political representation, for women.

Here are some of the famous historical figures who either are speaking or are seen in the video:

Suffragists (0:03-0:12): Clinton gives a shout-out to the early suffragists who fought for women’s right to vote and met at the 1848 Seneca Falls Convention in Seneca Falls, N.Y., to issue the Declaration of Sentiments, a founding document in the American women’s rights-movement.

Shirley Chisholm (0:16-0:23): She became the first African American woman elected to Congress in 1968 when the Democrat won a U.S. House seat in her native Brooklyn, N.Y. Chisholm ran for president in 1972.

Rosa Parks (0:27-0:34): The civil-rights activist is known for refusing to move to the back of a bus in Montgomery, Ala., an act that prompted the 1955-1956 protests said to make up the first high-profile, large-scale demonstration against segregation.

Margaret Chase Smith (0:39): The Maine Republican was the first woman elected to both Houses of Congress (U.S. House from 1940 to 1948 and the Senate from 1948 to 1972) and, at the 1964 Republican National Convention, she became “the first woman to have her name put in for nomination for the presidency by a major political party,” according to the House archives.

Dolores Huerta (0:47): Chanting “¡Si Se Puede!“ is the labor and migrant-rights activist who in 1962 helped launch the National Farm Workers Association, a precursor to the United Farm Workers of America.

Patsy Takemoto Mink (0:54): The Hawaii Rep. was the first woman of color elected to Congress. She’s known as the “Mother of Title IX,” one of the 1972 amendments that prohibits sex discrimination at education programs receiving federal funds, which led to the rise of female sports teams.

Ann Richards (1:08-1:14): The then-Texas State Treasurer became a national name with this famous line from keynote address to the 1988 Democratic Convention. She went on to be elected Governor of Texas, serving from 1991-1995. Her appearance in the video is followed by a voice-over from Cecile Richards (1:15), her daughter, who speaks about carrying on her legacy. Cecile Richards has been the President of the Planned Parenthood Federation of America during a period of high-profile funding battles.

The other modern-day people who appear or are heard in the video include teen voting-rights advocate Madison Kimrey, young volunteer Olivia Berg and “dare to compete” speaker Sofia Totti Bernardin. 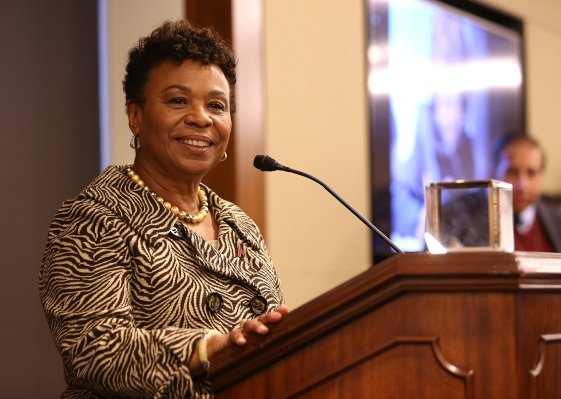