8 Podcasts That Will Help Distract You on a Long Run

Molly Cranna for TIME
By Health.com

When a friend’s sister recently told me that she listens to podcasts while running, I was intrigued, but also skeptical. How do you run without a beat? How can you daydream about made-up situations that probably won’t happen without inspiring music? (I tend to spend most of my runs fantasizing about what I’d do if I ever won the lottery, which just seems to pair really well with a Beyoncé soundtrack.) But a week later, when another friend mentioned he completed a half marathon while listening entirely to podcasts, I figured it was worth trying.

“Getting involved in a great podcast makes the time go faster during your run, since you’re not just watching the time slowly go by,” says Jenn Mathis, a regional fitness director from Gold’s Gym. “They also allow you to multi-task during a workout, since you can strengthen your body and mind at the same time.”

Here, eight podcasts that will help those miles fly by.

The Moth
The Moth has been around as a not-for-profit program since 1997, and includes both its public radio show (“The Moth Radio Hour”) and accompanying podcast. Episodes feature stories that often touch upon a similar theme, such as ghosts or “women in the world.” The stories are read aloud by real people in front of a live audience, which makes it easy to get swept up in the words.

How to listen: Subscribe on iTunes, or listen to hundreds of old episodes on The Moth App (available on iTunes and Google Play).

This American Life
If the first season of Serial is the only podcast you’ve ever listened to, you may remember that This American Life is its parent show. Each episode covers a different theme, which is performed through a mix of journalism, essays, or comedy. The show has a handy Favorites Page, a great place to start listening if you’re new.

How to listen: Subscribe on iTunes, or purchase archived episodes on Amazon MP3 or iTunes.

Modern Love
The Modern Love Podcast is an offshoot of the weekly New York Times series of the same name in which readers submit original essays about love. The podcast readings are done by celebrities and other public figures—in the most recent episode, the actress America Ferrera reads Mara Gordon’s essay about a date in Tanzania.

The Tim Ferriss Show
The most popular business podcast on iTunes boasts more than 60 million (!) downloads. In each episode, Tim Ferriss, an entrepreneur and the author of The 4-Hour Workweek, interviews a different successful person in order to deconstruct their habits, routines, and how they’ve gotten where they are.

Mystery Show
Health‘s digital deputy editor Christine Mattheis is a fan of this podcast, which she often listens to during workouts. “It’s entertaining and helps me focus on something other than how tired I am,” she says. Narrated by Starlee Kine, each episode centers around a different “mystery” that requires more than just a quick web search to solve. In one episode, Kine set out to determine Jack Gyllenhaal’s height; in another, she tracked down the owner of a license plate that read “I LUV 911”.

How to Be Amazing With Michael Ian Black
There are 27 episodes so far in comedian Michael Ian Black’s audioshow, each an in-depth interview with an “amazing” public figure. Recent guests include big names like Amy Schumer, Tavi Gavinson, Tom Colicchio, Nate Silver, and Megan Mullaly.

How to listen: Stream episodes on amazon.com/amazing, or listen through the Audible app, which is available on iTunes, Google Play, and Windows.

Overdue
You know all those great works of literature that you’ve always meant to read, or sort of skimmed in high school English class but didn’t really process? Each week, hosts Andrew Cunningham and Craig Getting read and dissect one such “overdue” book, from Flowers in the Attic to Les Miserables.

Surprisingly Awesome
The title says it all: Adam Davidson and Adam McKay spend each episode of their podcast discussing random things that you may be surprised to find out are actually pretty awesome. Prepare to have a newfound respect for adhesives, frequent flyer miles, and pigeons (yes, really). 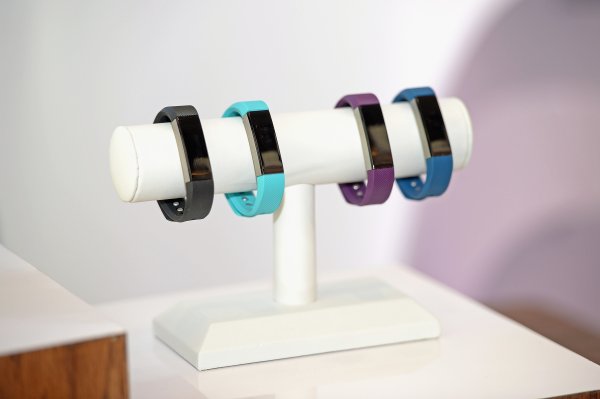 3 Unexpected Things Fitbit Can Tell You About Your Health
Next Up: Editor's Pick