What to Watch at the Nevada Caucuses

The Nevada caucuses are historically low-turnout and drama-filled, and Tuesday’s contest is set to be no exception. Just 10-15% of the state’s 400,000 registered Republicans are set to participate and public and private polling is notoriously unreliable in the state. Donald Trump is widely seen as the front-runner, with the state presenting a key test for Marco Rubio and Ted Cruz, who are engaged in a bitter battle for second place, both in Nevada and the coming Super Tuesday primaries next week. Each Trump rival faces the challenge of proving a path to viability against the bombastic front-runner before it’s too late. Rubio has much of the Jeb Bush network of donors and elected officials running to his side, but Cruz has maintained a strong grip on evangelical voters. Rather than focus on Trump, the pair have kept their aim on each other, facing the challenging game theory of believing that they would each win the nomination if they were the sole major candidate left facing Trump.

Cruz was forced to ask his top spokesman to resign Monday amid attacks on his and his campaign’s credibility in recent weeks. Since his campaign was caught spreading misinformation about Ben Carson on the night of the Iowa caucuses, Cruz has been plagued by accusations of dirty tricks. A staffer’s tweet spreading a false story about Rubio proved to be a bridge too far, and Cruz was forced to take action. But Rubio blamed Cruz himself for what he termed a pattern of actions unbecoming of a major candidate. Their feud threatens to spread deep into March depriving both—who each are searching for states where they can defeat Trump—of needed victories.

Hillary Clinton‘s position as Democratic front-runner appears more secure than at any time in recent months as she held off Bernie Sanders‘ challenge in Nevada and maintains her lead in South Carolina. Sanders, meanwhile, is adjusting his focus to Super Tuesday, though Clinton still maintains an advantage on organization and polling.

Why campaign reporters will miss Bush. Chris Christie helps an unlikely former rival. And Vice President Joe Biden is under fire for past comments on Supreme Court appointments.

Cruz Fires Top Spokesman for Spreading False Story About Rubio
His credibility under attack, Cruz shakes up his campaign [TIME]

Marco Rubio Bets on Nevada, a State That Shaped His Childhood
A long shot bet for a strong finish [New York Times]

Donald Trump on Protester: ‘I’d Like to Punch Him in the Face’

On Nevada Caucus-Eve, Trump Brings Out His Greatest Hits [CNN]

“I’d like to punch him in the face.” — Donald Trump on a heckler at his Las Vegas event Monday

“Obama is going to Cuba … It’d be nice if he just decided to stay.” — Ted Cruz at a rally in Las Vegas

Jon Huntsman: I Could Get Behind Donald Trump [CNN]

Voters Might Not Miss Jeb Bush, but Campaign Reporters Will [New York Times]

Kasich Says Women ‘Left Their Kitchens’ to Campaign for Him [TIME] 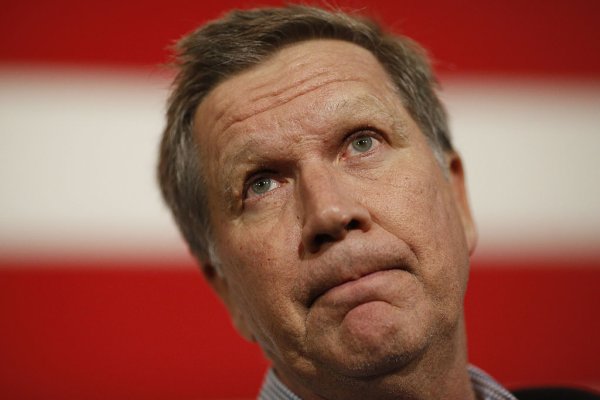 Kasich Losing to Trump in His Home State of Ohio
Next Up: Editor's Pick