Donald Trump settled into the gray armchair on the theater’s stage, leaning forward and praising his co-headliner Jerry Falwell Jr., the leader of the nation’s largest Christian university.

On a sleepy Saturday night in eastern Iowa, the pair talked about the manufacturing scene in Newton, Iowa, and the mullahs of Iran. Under crimson velvet curtains, they compared views on Saudi Arabia’s national defense and South Korea’s robust television makers.

That’s right. Here is the thrice-married New York billionaire, sharing the stage with the scion of one of the Christian Right’s leading families, during the final hours of a race in Iowa that is still uncertain. On stage, they exchanged pleasantries and praise, betraying no uneasiness between two men who live quite different lives.

“We need someone other than a career politician,” said Falwell, the leader of the Christian university founded by his father.

To some, it might reek of opportunism, but The Donald has never been one to show shame. Asked earlier in the campaign what he asks God for forgiveness, Trump professed that he had never done it. “I think if I do something wrong, I think, I just try and make it right. I don’t bring God into that picture,” Trump said. He also seemed to make light of the sacrament of Communion with references to eating “my little cracker” and drinking “my little wine.”

Falwell, whose college hosts mandatory worship services for students and is a frequent stop for Republicans, says he understands how some look at his endorsement with some skepticism given Trump’s previous support for same-sex marriage and abortion rights and his marital history.

“It’s just like when you have a sick child. You look for the best doctor you can find. It may not be a doctor who goes to your church but it’s the one who has best experience with that particular illness,” Falwell said. “We need a businessman.”

Read More: Why Trump Is Winning Over Christian Conservatives

“He was a great gentleman,” Trump said of the elder Falwell. “He says I remind him of his father. That’s the best compliment.”

Falwell’s character testimony, however, was a reminder of the chasm between Trump and these Iowans. When Trump’s limo broke down in rural New York and a couple helped him get home, Trump paid off their mortgage, Falwell said. Or when he saw that a Maytag plant in Newton, Iowa, was closing, “his hotels in Chicago bought supplies from those businesses to keep those businesses in business.” He let people sleep in the lobbies of his buildings during other New York catastrophes.

“He doesn’t brag,” Falwell said to laughter. “Well, he doesn’t brag about the types of things I’m going to talk about.”

Iowans are a faithful lot, and likely Republican caucus-goers are among the most faithful. Some 47% of likely Republican caucusgoers self-identify as Evangelical or born-again Christians, according to a Des Moines Register/Bloomberg Politics poll released just 48 hours before the contest. The same poll found 56% of those religious voters have a negative opinion of Trump.

Trump wrongly claimed Saturday night that Falwell’s support helped him take the lead among Evangelicals in that Iowa poll. Among Evangelicals, Cruz was ahead with 33% support to Trump’s 19%. Trump remained on top overall, however.

“I was doing really nice with the Evangelicals. Now, I’m leading with them,” Trump said.

Not quite. But he’s trying to make that reality with ads he is running on Christian radio touting the Falwell endorsement.

He’s hardly alone on those airwaves. Indeed, a holy war of political ads is being fought on Christian radio, as well as talk and country stations. One nasty ad says Cruz cannot be trusted to lead the fight against gay marriage because he was ambivalent about it when meeting with donors in New York. “He doesn’t tithe?” one woman asks a friend in a different part of the ad. “A millionaire that brags about his faith all the time.”

Read More: Inside the Political Ad War You Haven’t Heard About

Another ad praises Huckabee for his convictions and “strength and moral clarity in challenging times to fall to his knees and seek wisdom and counsel from God.” And backers of Carson have been running ads focused on his own faith.

These voters also were roadblocks for both of Mitt Romney’s bids for President as some Christian conservatives were deeply mistrustful of Romney’s Mormon faith.

Trump was trying to be on those voters’ good side. “You have broken all the rules,” Falwell said. The prayers now are that Trump can turn a polling advantage and indifference to tradition into wins. 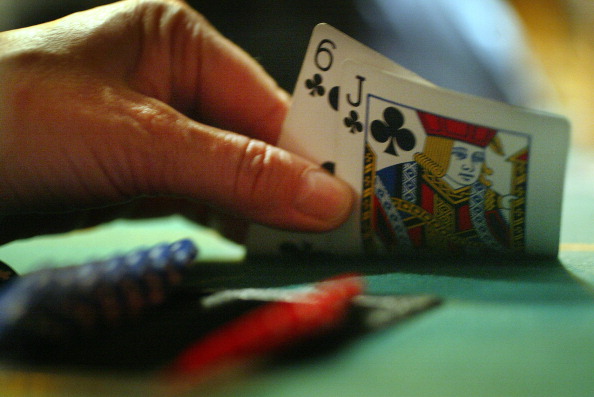 How Poker Explains Donald Trump's Campaign
Next Up: Editor's Pick