Straight off the farm and cared for with love, fresh produce from local farms is unbeatable. Follow these smart hacks to get the best of the best at the farmers’ market—and keep your produce fresher longer at home.

1. Buy sweet corn in the morning

The early bird gets the sweetest corn, among other things. Sweet corn’s “respiration,” which turns sugars into starch, slows down the colder it gets. Corn bought early in the morning will be sweeter than ears that have heated up under the summer sun later in the day.

At home, store corn unshucked in the refrigerator until ready to eat—the chill slows the respiration rate and keeps it sweet longer. Eat that day, if possible: It’s not going to get any better.

Peaches are notoriously sensitive and bruise easier than a poet’s feelings. Store them on their rounded sides or peaked bottoms, and they’ll totter, roll, and squish the ripe flesh beneath. Instead, keep them at room temperature, stem end down; this provides stability on a flat surface. The stem-side shoulders of the fruit will ultimately bruise as well once the fruit reaches a certain level of ripeness, but take heart: Our in-house chemical tests on sugar content showed that peach bottoms are actually a little sweeter than the shoulders.

3. Look for a yellow spot on a watermelon to indicate ripeness

Partly because unless you’re some kind of watermelon whisperer, the “thump test” won’t cut it. “I’ve been harvesting watermelons near 35 years and haven’t mastered the thump test,” Gilbert Miller, Clemson University’s area vegetable specialist, says of the method whereby you flick your finger against the rind and listen with canine acuity for subtle distinctions. Miller quotes Mark Twain, who said, “A ripe melon says ‘punk’ when thumped; a green one says ‘pink’ or ‘pank.'”

Look instead for a deep-cream or yellow ground spot–where the melon sat on the ground as it grew–to show that it ripened adequately before harvest. Light green or whitish spots indicate underripe melons. Another cue: Shiny melons may be unripe; dull rinds can be overripe.

4. Don’t store basil in the fridge

Vibrant, lush basil perfumes your car on the way home from the farmers’ market and fills you with inspiration for herb-focused cooking. So naturally it’s a crusher when–after storing it in the refrigerator with the best of intentions–you find the leaves withered and brown the next day. Basil is a tropical plant, highly sensitive to cold. It will turn black quickly if stored below 40°; your refrigerator is likely set between 35° and 38°. Instead, keep basil in a cool, shady place in your kitchen, stems submerged in a glass partly filled with water. Then place a large zip-top plastic bag over the top of the basil; this keeps the leaves moist while still letting the plant breathe.

Didn’t really know that, did you? It’s OK to admit—this was a new one for a lot of us. But we learned that cukes develop pits outside and wateriness inside when chilled below 50° for more than three days. Store them in a cool place on your kitchen counter, but be aware: Cucumbers are also sensitive to the ethylene gas given of by some fruits and veggies, so keep them apart from the likes of tomatoes, melons, and bananas.

This article originally appeared on CookingLight.com. 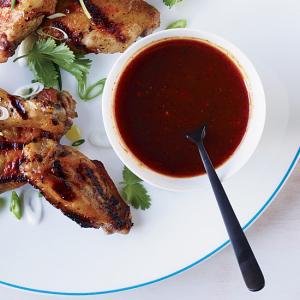 The 5 Best Sauces for a Backyard Barbecue
Next Up: Editor's Pick