17 Dos and Don'ts of Running With Your Dog

Your dog may be the ultimate exercise partner. Think about it: dogs are always eager to spend more time with you, they have plenty of excess energy to burn, and temptation to skip a scheduled sweat session melts away when your furry friend stands at the front door, leash in mouth, ready to log a few miles with you.

Before you hit the pavement, though, you’ll need to train your pooch to run with you. Here’s how to make your run enjoyable and rewarding for both you and your best (furry) friend.

Do: Give it a try

Just like humans, dogs need daily exercise for their health and happiness. And again, just like humans, American pets have a pudge problem: an estimated 52% of dogs are overweight or obese. Walking or running with your dog on a leash is one way to get you both moving more. Not all dogs are cut out to log multiple miles at once (more on that later), but many can learn to be great running partners. “Even if you think your dog is too hyper or too poorly behaved to jog alongside you, he may just need some training and some time to get used to it,” says Angi Aramburu, owner of Go Fetch Run, a group exercise class for owners and their dogs in New York City.

Don’t: Assume your dog’s a runner

Before you hit the road, consider your dog’s health, build, and breed. Older pups may have joint problems that can slow them down or make running uncomfortable. Dogs with short legs may not be able to keep up with the pace you’d like to maintain, while larger breeds are prone to hip dysplasia, an abnormal formation of the hip socket that can lead to arthritis, says Arumburu. Then, if your furry friend is a chihuahua, bulldog, pug, or other snort-nosed, flat-faced breed (also known as brachycephalic), running may simply require too much exertion. Their squished faces are cute, but they tend to have narrowed nostrils and partially obstructed airways, which make breathing difficult when they work too hard.

Do: Check in with your vet

If you aren’t sure whether your dog’s fit to run, check with your veterinarian. “A vet can let you know if there are any red flags, and can provide advice about what’s safe and healthy for your individual dog in your individual surroundings,” says Aramburu. Even if you’re certain your pup will be fine, give your vet a heads up. The doc may recommend dietary adjustments to go along with the uptick in exercise, for example.

Don’t: Start them too young

Running on hard surfaces can damage a puppy’s joints and bones that haven’t fully formed yet. “You really should wait until a young dog’s growth plates [areas of cartilage near the ends of bones] have started to close, and that time frame really varies by breed and size of dog,” says Sharon Wirant, an animal behaviorist with the ASPCA. “A much smaller dog like a Jack Russell Terrier could probably start going on regular runs earlier than a larger dog, like a Great Dane, whose growth plates will take longer to seal up,” she says. If your puppy is still growing or hasn’t started running with you yet, ask your vet about when it’s safe to start.

Do: Start out slow

“A sedentary person can’t just jump off the couch one day and run 5 miles, and neither can a sedentary dog,” says Aramburu. “Too much too soon increases your dog’s risk of injury, just as it would a human’s.” Find a beginner 5K training plan that will let you and your pooch progress at a safe, healthy pace. Many of these plans combine intervals of walking and jogging, so there’s plenty of time for active recovery and catching your breath.

Don’t: Skip your warm up

Before you pick up your pace for any workout, be sure you’ve given yourself—and your dog—at least a few minutes of walking or slow jogging. “Warming up those muscles is a great idea for both you and your dog, and can protect you both against injuries” says Wirant. Another warm-up ritual to make a habit: giving your furball a chance to sniff around and do his business. That means fewer stops for pee and poop breaks once you get moving.

Do: Head for the trails

Running on dirt trails will be easier on your pup’s joins and paws than running on asphalt, says Aramburu. (The same goes for your own joints!) Plus, your dog will enjoy the natural sights, smells, and sounds—perhaps more so than the sidewalk in your neighborhood. Be sure to check at the park entrance or trailhead that dogs are allowed, either on- or off-leash. And before you let your dog off-leash, check into what types of wildlife roam the park. Deer and foxes can both seriously injure or even kill your beloved pet.

Spending time outdoors with your dog—especially if you’re tackling the trail—may put you both at risk for picking up ticks along the way. Protect yourself by wearing bug spray and long socks, and check with your vet to be sure your pet is up-to-date on tick medication. Then, after any run through woods or long grass, inspect both yourself and your dog for ticks that may have hitched a ride home, and promptly remove any that you find. If you do realize your dog’s been bitten, call your vet for next steps.

A dog that misbehaves on walks probably isn’t ready to run, says Wirant. “You want to teach them to walk nicely on leash, and break the behaviors of stopping to sniff or marking every tree, or racing ahead and pulling you.”

It’s also important to teach a “Leave It” command, so that your dog will ignore or walk away from tempting items (like trash, roadkill, or sticks) they might come across on a path. Teaching them to “Sit” and “Stay” is also helpful, especially at traffic crossings. If you have trouble training your dog any of these commands, consider an obedience class or dog trainer.

Don’t: Let them pull you

Use a 4- to 6-foot leash; anything longer than that can spell trouble on the jogging path, since you want to train Fido to stay by your side. “Their nose should be even with your knee, and your arm should be straight down and holding their leash right by their collar, at least while they’re getting used to running with you,” says Aramburu. During the teaching stage, it can be helpful to maintain this position during walks as well. “Normally you want to give them more freedom while you’re walking, but it’s fine to keep them really close for a few minutes at a time and then praise them and let the leash out so they get a reward for being good.”

“Dogs can’t really tell us when they’re thirsty, so I tend to be over cautious with the water,” says Aramburu. She recommends stopping every 10 minutes, at least until you have an idea of how much water your dog needs—and especially in sunny or hot weather. You’ll want to carry a container that your dog can drink from, like a collapsible bowl or a bottle with a special spout for dogs. (And while we’re on the subject: Don’t share your Gatorade!)

Don’t: Run when it’s too hot

Dogs overheat more easily than humans, since they have heavy fur coats and they don’t sweat. So it’s important to be careful when it’s warm out, and to avoid running in midday heat. Longhaired pooches may feel cooler in the summertime after a haircut—but don’t go too short, since that coat also protects against sunburn.

Run in the shade, when possible, and avoid hot blacktop, asphalt, or sand, which can burn dogs’ paws. To test a surface’s temperature, Banfield Pet Hospital recommends placing your hand or a bare foot on it for 10 seconds. If it’s too hot for you, it’s too hot for your pet.

Do: Watch out for their paws

Check your dog’s paws when you get back from a run to make sure they haven’t suffered any cuts or injuries, says Winart. Take extra care in the heat, since their feet are susceptible to burns, and when you’re on the trail, where you’ll come across more rocks, sticks, and uneven terrain.

If you run in the snow, try to avoid roads that have been treated with salt, which can sting dogs’ feet—and then upset their stomachs if they lick their paws once they’re inside. Canine booties or disposable latex boots can shield paws from irritants; if your dog won’t tolerate them, you can also apply petroleum jelly or Musher’s Secret wax to their pads to provide some protection.

During and after your run, watch your dog for signs of heatstroke or overexertion, like lethargy, weakness, drooling and dark red gums, vomiting, bloody diarrhea, or panting to the point that he can’t catch his breath. If your dog stops and refuses to continue, don’t force him.

Any time your dog seems overheated, find shade and give him cool or air-temperature water; you may even want to dump some on his head or body. Just don’t let your dog gulp too much water during or after exercise. When they’re hot and thirsty, it is possible for dogs to drink too much, says Wirant, and suffer from potentially fatal water toxicity or from bloat, a dangerous condition in which they swallow a lot of air.

Do: Have a poop plan

As a dog owner you probably know better than to leave puppy poop behind, but still—it’s easy to forget to take waste bags with you when you head out for a run. Not only should you be prepared to pick up after your dog while you’re exercising, you should also know where you’re going to dispose of it, even if that means holding onto it until you find a trash can.

Giving your dog time to “go” before and after your run will reduce your chances of having to make a mid-workout pit stop. “With time, you can absolutely train your dog to urinate and defecate on demand by taking them to the place where they usually go and using a verbal cue,” says Wirant.

Don’t: Give treats too soon

When you finish a tough run and you’re still panting and sweating, you probably wouldn’t have a snack—you’d get sick to your stomach. Same goes for your dog, so hold off on treats until you’ve both calmed down a bit, says Wirant. (Watch out for ice cubes and ice water, too: The extreme temperature change could cause vomiting.) In the meantime, reward your dog by praising him, petting him, and giving him lots of attention. And before you head inside, let him have a few minutes to run around and explore, and to go to the bathroom once more.

Once your dog has mastered the art of running on a leash, you’ll have yourself an always-willing, always-excited exercise partner. Just be sure your dog seems happy. A good sign: he wags his tail and barks when he sees you take out his running leash. Leave him home for a few sweat sessions if he seems stiff or uncomfortable after exercise.

In the long run, working out with your dog can keep unwanted pounds off, extend your life, and help you stay healthy and happy—and same goes for your furry friend. Keep it up! 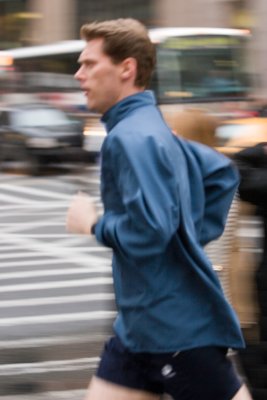 This Study Busts Your Work Out Excuse
Next Up: Editor's Pick