Everything You Need to Know About This Year's Oscars

Favorites have already emerged in many of the Oscar categories this year, but that doesn’t mean there won’t be a few surprises when the awards show airs Sunday at 8:30 p.m. E.T. on ABC. From the battle of Birdman vs. Boyhood to a handful of mystery performances, the 87th Academy Awards promise to be eventful—if a little predictable.

Who’s hosting? Neil Patrick Harris makes his debut running the show, though he’s had good practice—he kicked off the 82nd awards with the opening number “No One Wants to Do It Alone.” This time around, he’ll perform a song by the Frozen duo Kristen Anderson-Lopez and Robert Lopez called “Moving Pictures.” Harris got good reviews for his previous hosting gigs at the Emmys and the Tonys, so this one should go off without a hitch.

Who else is performing? As usual, each of the nominees for Best Original Song will be performed: That means Adam Levine with “Lost Stars” (from Begin Again), Common and John Legend with “Glory” (Selma), Rita Ora with “Grateful” (Beyond the Lights), Tim McGraw with “I’m Not Gonna Miss You” (Glen Campbell…I’ll Be Me) and Tegan and Sara and The Lonely Island with “Everything Is Awesome” (The Lego Movie). We’ll also see special performances from Lady Gaga, Jack Black, Jennifer Hudson and Anna Kendrick, but producers Neil Meron and Craig Zadan haven’t released specifics on their sequences.

Who’s expected to win? Boyhood and Birdman will duke it out for Best Picture, with their respective directors Richard Linklater and Alejandro González Iñárritu neck and neck for Best Director. Julianne Moore and Patricia Arquette are widely perceived to have locks on Best Actress and Best Supporting Actress for Still Alice and Boyhood, respectively. While there’s a contingency pushing for Michael Keaton to take home the Best Actor statue for Birdman, Eddie Redmayne still looks like the safest bet for his turn as Stephen Hawking in The Theory of Everything. J.K. Simmons is all but a sure thing as Best Supporting Actor for Whiplash. For a more comprehensive take, see TIME’s predictions courtesy of film critic Richard Corliss.

Any notable presenters? John Travolta will be back despite—or perhaps because of—his flubbing Idina Menzel’s name as “Adele Dazeem” last year, a decision TIME’s Daniel D’Addario calls “the most brilliant move the producers could have made.” Others on the long list include Dakota Johnson, fresh out of the spotlight for the Fifty Shades of Grey release, and Selma star David Oyelowo—despite the fact that he was snubbed in the Best Actor category.

Other big snubs? Oyelowo’s director Ava DuVernay would have been the first black woman to be nominated in the Best Director category; it’s an oversight that feels all the more noteworthy given that the MLK biopic was released during a historical moment when American race relations have been particularly fraught. On a lighter note: Fans were stunned when The Lego Movie didn’t get nominated for Best Animated Feature, since many had predicted it would win. Other conspicuous omissions include Clint Eastwood for his American Sniper directing, Jake Gyllenhaal for Nightcrawler, Jennifer Aniston for Cake and Amy Adams for Big Eyes, a performance that won her a Golden Globe. A Most Violent Year, Gone Girl and Unbroken were also expected to get more love from the Academy.

Get ready for surprise performances, upsets, and maybe even a moment that lives up to last year’s epic selfie. The red carpet special starts at 7 p.m. EST. 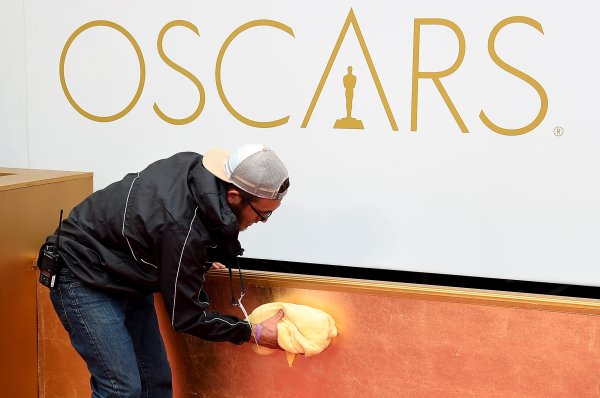 The Indie Spirit Awards and the Oscars, or (Why Does Hollywood Hate Itself?)
EDIT POST