15 Things Nobody Tells You About Losing Weight

Losing weight does more than give you an excuse to buy new clothes. Dropping just 5 to 10% of your body weight can improve your overall health and reduce your risk for chronic conditions like heart disease and diabetes. But shedding unwanted pounds can also have less-obvious effects, and not always for the better, says Adam Tsai, MD, a physician at Kaiser Permanente Colorado and a spokesperson for the Obesity Society. Here are the good things—and the bad—that you don’t normally hear about losing weight.

Your energy levels will skyrocket

A big energy boost is often the first thing people notice when they start dropping weight. Why? When you’re carrying around fewer pounds, you use less energy to simply go about your day, says Dr. Tsai. Weight loss also improves oxygen efficiency, so you won’t find yourself out of breath so easily when climbing stairs or hustling to catch the bus.

Your memory may improve

Your relationship will be tested

Losing weight can make you feel sexier, but your slimmed-down body—and that newfound confidence—won’t necessarily strengthen your bond with your spouse. In a 2013 study from North Carolina State University, researchers found that although dropping 60 pounds or more in two years or less usually improved couples’ relationships, occasionally a dieter’s partner felt jealous or threatened. Why? Your body transformation may force your significant other to consider his or her own health choices, says Gail Saltz, MD, Health‘s contributing psychology editor. Another problem: Your partner may worry about how your personality might change. “You feeling great, sexy, or confident could shift the balance of the relationship,” Dr. Saltz says. “They fear losing the identity of the more confident one or losing the upper hand.” Many of these challenges could apply to friendships, too.

Your risk of cancer will be lower

You know that smoking, sun exposure, and radiation can cause cancer, but obesity has been linked to several types of cancers as well, says Dr. Tsai. Being overweight causes inflammation that triggers cell changes within the body. Dangerous levels of inflammation can be lowered, however, by losing just 5% of your body weight, according to a 2012 study on post-menopausal women published in the journal Cancer Research. And a 2014 study published in Obesity Research found that morbidly obese men who underwent bariatric surgery reduced their cancer risk over the following years to roughly that of normal-weight people.

If you were depressed before, that may not change

Does being overweight make you depressed—or does being depressed lead to weight gain? It’s not always possible to tell what comes first, says Dr. Tsai. And while most people feel happier after they’ve lost weight, it’s not a cure-all. “For a smaller percentage of people, mood will not improve even after they lose 100 pounds,” he says. That may be because weight loss doesn’t address any underlying problems you may have, says Dr. Saltz.

Losing a lot of weight in a small amount of time may alter your taste buds. A recent Stanford University study revealed that after bariatric surgery, 87% of patients reported a change in their sense of taste. About half said food tasted sharper, while the other half said food tasted duller. The upshot: those who tasted food less intensely after surgery lost 20% more weight over three months than those who said foods tasted stronger. The study authors say more research is needed to determine why the change in taste occurs, but another recent study did have similar findings. The study, from Leicester Royal Infirmary in the United Kingdom, found that three quarters of weight loss surgery patients developed a dislike for certain foods after their operations, most often meat and dairy products.

Working out will be more fun

When you’re carrying around extra pounds, exercising can make your joints hurt and lungs burn more than someone who’s at a normal weight, says Dr. Tsai. Once you start to slim down, exercise will start to feel less like a chore and more like the fun, energizing experience that it should be. Plus, being lighter can also make you faster and stronger. Take running, for example: It’s generally believed that for every pound lost, an athlete can shave two seconds off the time it takes to run a mile.

Your bones may change

Ever heard that losing weight weakens your bones? While it’s true that weight loss is associated with bone loss, it’s only a big concern if you become underweight or follow an unhealthy diet, and the National Osteoporosis Foundation says that the benefits of weight loss usually outweigh the risks. Extra weight can make your bones stronger (they have to be, to carry the extra pounds) but it also damages joints. And new research suggests that visceral fat around the belly is particularly bad for bones, for both men and women. Losing weight can help, as well as reduce arthritis symptoms, according to a 2013 review published in the Journal of the American Academy of Orthopedic Surgeons.

Normal-weight people spend less money on medical bills and expenses than their overweight peers, according to a 2009 study published in the journal Health Affairs. Specifically, researchers found obese people spent $1,429 more—that’s 42% higher—than their normal-weight peers, most of which went toward prescription medications needed to manage chronic conditions. And a 2014 report on Michigan residents found that annual health care costs for people who were extremely obese were a whopping 90% higher than those of normal-weight individuals.

In related sad-but-true news, you might notice something else when you lose weight, as well: Doctors (whose bias against obese patients has been well documented) may treat you better, too.

HEALTH.COM: 10 Signs Your House Is Making You Fat

You may get a raise

It’s not just doctors who may treat you better after losing weight; your employer might, too. Studies have shown that obese people make less money than normal-weight workers, especially among women. In fact, a 2004 study published in Health Economics found that the average paycheck for an obese worker was about 2.5% lower than that of a thinner employee. Dropping down to a healthy weight may also get you more job offers, according to a 2014 British study.

You may be able to toss your meds

Maintaining a healthy weight can protect you against diabetes and heart disease—but what if you’re already overweight and suffering from these conditions? Good news: Slimming down can still help. “These conditions won’t necessarily go away, but you may be able to reduce your symptoms and the amount of medication you take,” says Dr. Tsai.

You may be able to take less blood pressure or cholesterol medication, for example, or learn to manage your type 2 diabetes without giving yourself daily injections. Studies also show that losing weight may allow you control chronic conditions like asthma and heartburn without (or with less) medication, as well. In related sad-but-true news, you might notice something else when you lose weight, as well: Doctors (whose bias against obese patients has been well documented) may treat you better, too.

Your skin may sag

One thing many people aren’t prepared for after a dramatic weight loss is the loose, sagging skin. It won’t go away overnight—or perhaps ever—and it may leave you feeling disappointed with your new body. Some opt for body contouring procedures like a facelift, breast lift, or tummy tuck, but any surgery carries risks, and in most cases insurance will not cover these cosmetic surgeries.

People who lost at least 5% of their body weight over a six-month period slept an average of 22 minutes longer than they had previously in a 2014 University of Pennsylvania study. And earlier in the year, Finnish researchers reported that modest weight loss significantly improved symptoms of sleep apnea.

You could boost your chances of having a baby

If you’ve been trying to get pregnant, losing a few pounds may help. A 2009 study published in Fertility and Sterility found that obesity in women is associated with infertility and polycystic ovary syndrome, and that the younger a woman is when she becomes obese, the harder it could be for her to get pregnant.

Slimming down can also help ensure that you have a healthy pregnancy and a healthy baby, since a mom’s weight during (and even before) has been linked to all sorts of health outcomes for her kids.

HEALTH.COM: 10 Types of Hunger and How to Control Them

Your eye health will improve

Matthew McConaughey told interviewers that his rapid weight-loss in preparation for his role as an AIDS victim in Dallas Buyers Club caused him to start losing his eyesight. That may be the result of extreme calorie restriction or nutritional deficiencies—but for most people, weight loss can actually protect their vision from obesity-related conditions like type 2 diabetes.

A 2013 University of Georgia study, for example, found that higher body fat percentage was associated with lower levels of the antioxidants lutien and zeaxanthin in retinal tissue. “The results indicate that adiposity may affect the nutritional state of the retina,” the authors wrote. “Such links may be one of the reasons that obesity promotes age-related degenerative conditions.” 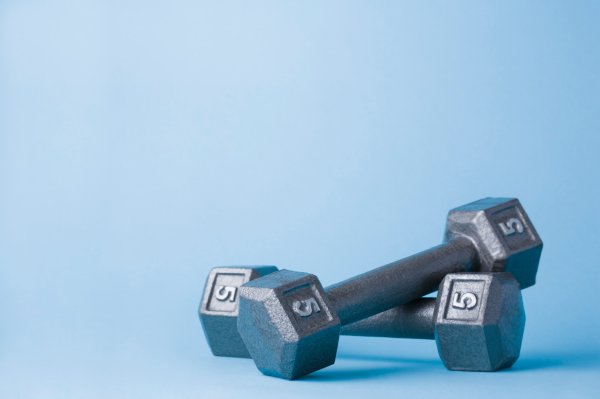 6 Signs You’re Not Working Out Hard Enough
Next Up: Editor's Pick