Inhale. Exhale. You take 15 to 20 breaths a minute—more than 20,000 breaths a day. With each one, oxygen travels through your bloodstream, fueling your body’s cells. Trouble is, we bombard our lungs with pollutants and irritants such as secondhand smoke and fumes from household cleaning supplies. “Still, lungs are resilient,” says Ravi Kalhan, MD, director of the Asthma/COPD Program at Northwestern University Feinberg School of Medicine. “Keep them healthy and they will protect you into old age.” Read on, and start breathing easy.

GET FIT
While exercise doesn’t increase lung capacity per se, “it strengthens heart muscles so your heart is better able to pump oxygenated blood through your body,” says Doreen Addrizzo-Harris, MD, associate professor of pulmonology at the NYU Medical Center. “Your lungs then don’t have to work as hard.” You’ll exercise more efficiently and feel less winded.

HEALTH.COM: How to Become an Exercise Addict

Exercise can also trim belly fat, which is linked to a higher risk of asthma. “We think the excess fat associated with obesity increases inflammation in the body, which affects the lungs,” says Neil Schachter, MD, a pulmonologist at the Icahn School of Medicine at Mount Sinai in New York City. To see results, you need consistent exercise, raising your heart rate for 20 to 30 minutes most days of the week, says Jason Turowski, MD, a pulmonologist at the Cleveland Clinic. If you’ve got asthma, it might be hard to maintain an intense workout, but lower-key activities may help reduce airway inflammation. In one study, asthmatic adults who walked for 20 to 30 minutes three times a week at a moderate pace reported improvement in their symptoms. Swimming is another option, especially during the frigid winter months. The warm, moist air at an indoor pool is asthma-friendly. (But don’t swim in a pool that’s strongly chlorinated; irritation from the fumes can counteract the benefits.)

“An anti-inflammatory diet helps decrease airway inflammation, which has been linked to respiratory diseases such as COPD and asthma,” notes Melissa Young, MD, an integrative medicine specialist at the Cleveland Clinic. Fill up with these foods:

Fruits and veggies: They’re packed with antioxidants, which can help repair damage from air pollution. It doesn’t matter what kind, as long as you eat plenty of them.

Flaxseeds: They contain high levels of omega-3 fatty acids, which are believed to be connected to a lower risk of asthma.

Olive oil: It has monounsaturated fatty acids, which can help reduce inflammation, and alpha-tocopherol, a form of vitamin E associated with better lung function.

A cup of joe: Caffeine has a similar effect as the drug therophyllin, which opens up the airways,” Dr. Turowski says.

Air pollution claims more than 3.2 million lives worldwide every year, according to the 2013 Global Burden of Disease Study. Why? The tiny particles penetrate the lungs, causing cancer and other respiratory illnesses. We don’t expect you to flee L.A. for Idaho, but there are precautions that everyone should take.

Check the forecast: You can find the Air Quality Index (AQI) at airnow.gov. On days that the AQI in your area is high (over 150 if you have no lung issues, over 100 if you’ve got a breathing problem), consider taking your workout indoors. If you do exercise outdoors, avoid routes near traffic.

Don’t idle your car: It releases as much pollution as a moving vehicle, and you’re in the middle of the mist. Turn off the ignition if you’re waiting more than 10 seconds, and warm up your engine by driving. (Your car and its engine warm up faster when you drive.)

Make a P.M. pit stop: As you fill your tank, gas emissions evaporate and form ozone, a component of smog. Hit the pump after dark to keep the sun from turning those gases into pollutants.

REHAB YOUR HOME
Air pollution in your house may be worse than what’s festering outdoors. Here’s how to clear the air, stat.

Go electric: Your home heating and AC system should ideally operate on electricity, not oil, since the latter releases more particulates. Most homes built after 2000 do, but if you’re living in an older home that uses oil, consider installing a home air-filtration system for a few thousand dollars.

HEALTH.COM: 9 Ways to Detox Your Home

Get tested: Every two years, your home should be tested for radon—an odorless natural gas that’s found in one in every 15 homes in the U.S. and is the second leading cause of lung cancer. You can hire a certified company to do it, or buy a test kit for $15 to $25 at a hardware store or throughsosradon.org/test-kits. If radon concentrations exceed 4 picocuries per liter of air (pCi/L), you’ll need to install a radon reduction system (up to $1,500).

Keep humidity low: A too-damp environment is a breeding ground for mold, a common allergen. The EPA recommends keeping humidity under 60% in the summer and between 25 and 40% in winter. You can measure humidity with a hygrometer ($20 to $40 at a hardware store). If the air is too dry, use a humidifier. It it’s too wet, try a dehumidifier.

Trade in your fireplace: The particulate matter in wood smoke can damage your heart and lungs. Switch to a cleaner-burning gas or wood stove certified by the EPA, or put in an electronic fireplace or gas insert (about $1,000 to $3,000) for fewer emissions. To learn more, go to epa.gov/burnwise.

STAY SAFE FROM THIRDHAND SMOKE
You know not to smoke and to keep away from secondhand smoke. But there’s something called thirdhand smoke—residual tobacco fumes that adhere to walls and furniture and then off-gas slowly into the indoor environment. This stuff isn’t just smelly: It reacts with indoor pollutants, such as ozone and nitrous acid, creating compounds that lock onto your cells’ DNA and cause potentially cancer-causing damage, according to research presented at the American Chemical Society’s 2014 meeting. While the risk is higher for babies and toddlers (as they crawl around the house, they may stir up and inhale these compounds), pretty much anyone is susceptible.

When traveling, insist on smoke-free hotel rooms, and avoid homes of friends who smoke (even if they’re not lighting up in front of you, their furniture can reek). If you inherit the home of a smoker, remove affected items like sofas and carpets, repaint and bring in a professional to thoroughly clean the air-ventilation system.

DID YOUR DUVET GIVE YOU ASTHMA?
You’ve never had asthma before, but lately you’re constantly short of breath. What gives? “It’s not uncommon for a 40-something woman to suddenly complain of asthmalike symptoms,” Dr. Addrizzo-Harris says. A typical trigger: being exposed to an allergen you haven’t faced in years, such as feather bedding or mold. “I can’t tell you how often I’ve seen a patient who reports symptoms starting as soon as she moves into a new house,” Dr. Turowski says. “Usually a moldy basement is the culprit.”

A WOMAN’S PROBLEM?
How the three P’s of womanhood can mess with your breathing.

You’re about to get your period: Up to 40% of women with asthma report that their symptoms worsen immediately before their period. “During this time, estrogen levels drop, and we think that these fluctuations somehow activate an inflammatory response in a woman’s airways,” Dr. Kalhan says. As a result, you’re more likely to cough, feel short of breath and wheeze. Talk to your doc about increasing asthma meds on these days; research also suggests that taking birth control pills (to ward off hormone rises and dips) may help.

You’re pregnant: In the first few weeks of pregnancy, an increase in the hormone progesterone causes you to breathe more often, which may make you feel like you’re short of breath when you really aren’t. (The hormone expands your lung capacity, allowing your blood to carry large quantities of oxygen to your baby.) This sensation disappears, then re-emerges around your third trimester, when your uterus begins to press on your diaphragm, making it harder for your lungs to fully expand. But there’s relief soon: During the final month of pregnancy, your baby will “drop” into your pelvis, taking pressure off your lungs.

HEALTH.COM: 10 Tips for Getting Pregnant

You’re going through perimenopause: As you approach menopause, estrogen levels ride a veritable roller coaster, and those dramatic peaks and drops can trigger inflammation that sets off an asthma attack. Research has shown that menopausal women are twice as prone to severe asthma as similarly aged men. If you notice your wheezing getting worse, talk to your gyno about going on the pill or using hormone therapy to help ease you through the transition. The good news is that once your ovaries have closed up shop, your asthma should improve.

This piece originally appeared on Health.com. 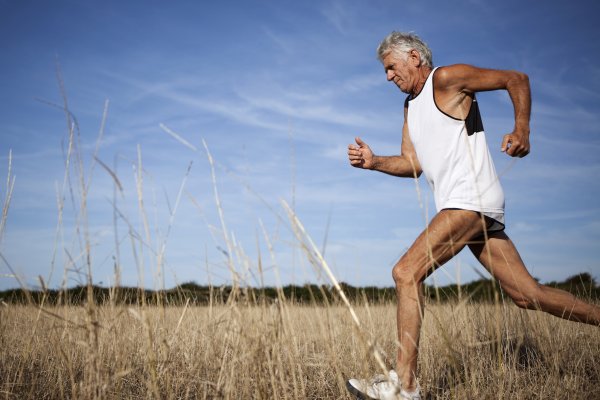 Why Running May Really Be The Fountain of Youth
Next Up: Editor's Pick