Alysia Padilla-Vacarro and daughter Evangelina on the day of her gene therapy treatment. Evangelina, now two years old, has had her immune system restored and lives a healthy and normal life.
Courtesy of UCLA
By Alice Park

Alysia Padilla-Vaccaro and Christian Vaccaro owe their daughter’s life to stem cells. Evangelina, now two, is alive today because she saved herself with her own bone marrow cells.

Evangelina, a twin, was born with a severe immune disorder caused by a genetic aberration that makes her vulnerable to any and all bacteria and viruses; even a simple cold could be fatal. But doctors at University of California Los Angeles (UCLA) Broad Stem Cell Research Center gave her a new treatment, using her own stem cells, that has essentially cured her disease. She’s one of 18 children who have been treated with the cutting-edge therapy, and the study’s leader, Dr. Donald Kohn, says that the strategy could also be used to treat other gene-based disorders such as sickle cell anemia.

Known to doctors as adenosine deaminase (ADA)-deficient severe combined immunodeficiency (SCID), it’s better known as “bubble boy” disease, since children born with the genetic disorder have immune systems so weak that they need to stay in relatively clean and germ-free environments. Until Evangelina and her sister Annabella were 11 months old, “We were gowned and masked and did not go outside,” says their mother Alysia Padilla-Vaccaro. “Our children did not physically see our mouths until then because we were masked all the time. We couldn’t take them outside to take a breath of fresh air, because there is fungus in the air, and that could kill her.”

Both parents wore masks at work to lower the chances they would be exposed to germs that they might bring back home. And they took showers and changed clothes as soon as they entered the house.

SCID is caused by a genetic mutation in the ADA gene, which normally produces the white blood cells that are the front lines of the body’s defense against bacteria and viruses. The Vaccaros decided to treat Annabella in the same way that they cared for Evangelina; “They were crawling and playing with each other, and every toy they sucked on, they stuck in each other’s hands and each other’s mouth, so we couldn’t take one outside to have a grand old time and potentially bring something back that could harm her sister,” says Padilla-Vaccaro.

Christian and Alysia Padilla-Vaccaro and their healthy twins Annabella (left) and Evangelina. Now with a newly-restored immune system, Evangelina lives a normal and healthy life.
Courtesy of UCLA

The only treatments for SCID are bone marrow transplants from healthy people, ideally a matched sibling; the unaffected cells can then repopulate the immune system of the baby with SCID. But despite being her twin, Annabella wasn’t a blood match for her sister, nor were her parents. Padilla-Vaccaro and her husband, Christian, were considering unrelated donors but were concerned about the risk of rejection. “We would be trying to fix one problem and getting another,” she says.

That’s when the doctors at the Children’s Hospital at Orange County, where Evangelina was diagnosed, told her parents about a stem cell trial for SCID babies at UCLA, led by Dr. Donald Kohn. “As soon as they said trial, I thought, ‘my kid is dead,” says Padilla-Vaccaro of the last resort option. But a dozen children born with other forms of SCID—in which different mutations caused the same weak immune systems—who were successfully treated by Kohn convinced the couple that the therapy was worth trying. Kohn had one spot left in the trial and was willing to hold it for Evangelina until she matured more. Born premature, she was diagnosed at six weeks old and needed more time for what was left of her immune system to catch up to weather the procedure.

When she was two months old, Evangelina was admitted to UCLA and had bone marrow drawn from her tiny hip. It contained the stem cells that go on to develop into all of the cells in the blood and immune systems. Kohn treated them with gene therapy, co-opting a modified virus to carry the healthy ADA gene so it could infect the stem cells from Evangelina’s bone marrow. The idea was that by transplanting these healthy ADA-containing cells back into Evangelina, she would soon be making her own healthy immune cells. And because they were made from her own cells, her body wouldn’t reject them.

“After the transplant of this miraculous tube of stem cells, which literally took five minutes, we had to just wait and see for a good six weeks,” says Padilla-Vaccaro. “The week after Christmas [in 2012], Dr. Kohn came in and told me, ‘It worked.’ It worked. Those words…besides the birth of my children, that day will always be the best day in my life.”

The success was a long time coming for Kohn as well. His group has been researching the best way to treat SCID with gene therapy for more than two decades. In the first trial, in 1993, they used cord blood, treating it with the healthy ADA gene and hoping enough of them would “take” to rebuild an immune system. It didn’t work.

In 2001, they tried a different way of delivering the precious gene in four patients. That failed as well.

Then, in 2009, he and his team began the trial that Evangelina eventually joined. After reading about a group in Italy that completely obliterated the patients’ existing immune systems with chemotherapy first, before introducing the new bone marrow cells to repopulate the system, Kohn tried that strategy on 10 babies. “Of all the patients we treated, all have had good immune reconstitution,” he says. “Within a month or two, we start seeing cells appear in the blood that are making the missing gene. When they are six months old or so, their immune systems are good enough for them to go out and not be protected, and by age two, they are pretty stable—their immune systems are reset.”

That’s where Evangelina is now, able to finally enjoy the world outside her home and the hospital. She got her first kisses from her parents when she was 18 months old. “My worry was that I couldn’t raise my daughter without her sister,” says Padilla-Vaccaro. “Now I don’t have to.” 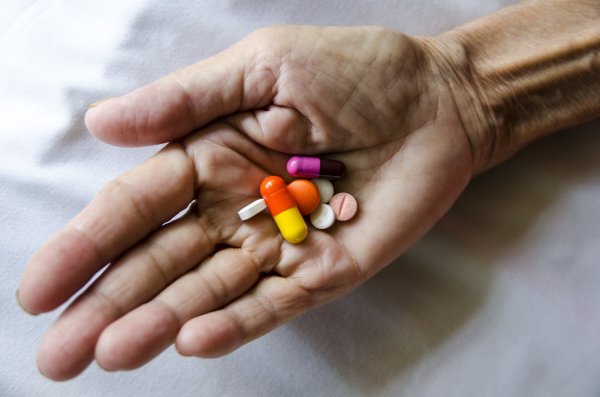 Science Says These Are the Best Ways to Swallow Pills
Next Up: Editor's Pick