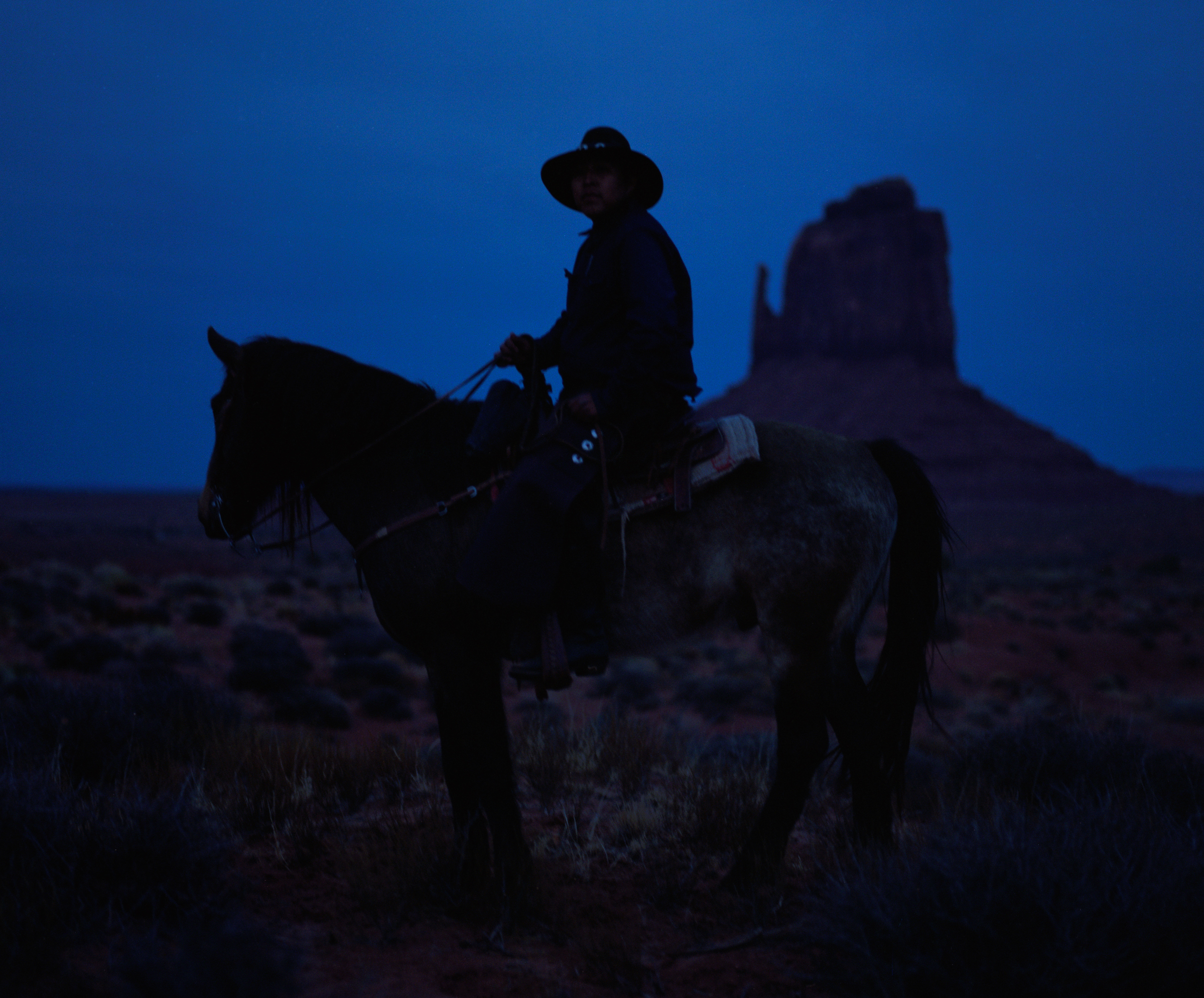 Royden Teeasyatoh, 26, is a local tour guide in Monument Valley who runs stables and gives horseback tours to tourists throughout the area.
Ryan Shorosky for TIME

Tribes Celebrated When This Region Became a National Monument. Now They're Suing to Get It Back

By Katy Steinmetz | Photographs by Ryan Shorosky for TIME

In the Bears Ears region of Southeastern Utah, there is an area of winding canyons known by Navajo people as Nahoniti’ino – or the hiding place. American Indians used the landscape to elude U.S. military troops in 1864, as thousands were being marched by gunpoint down to Fort Sumner in New Mexico. Hundreds died from hunger and exhaustion in what became known as the Long Walk, a brutal chapter that five tribes highlight in a lawsuit they recently filed against President Donald Trump.

Elouise Wilson is pictured at her home in Monument Valley, on the Navajo reservation. Wilson is the mother of eight and lived with her family in a traditional hogan as recent as 2006. She is the mother of Cynthia Wilson, a Traditional Foods Program Director for the Utah Dine Bikeyah who is also helping to protect Bears Ears and its cultural traditions.
Ryan Shorosky for TIME
Wilson Collins is pictured at his home in Monument Valley. The tattoos covering his body include traditional Navajo imagery. Collins struggles with alcoholism, a common problem on reservations that is now being addressed by many tribes. He lives in a trailer and spends most of his days with his younger brother, who sells Navajo arts and crafts.
Ryan Shorosky for TIME

Tribes worked for years to have the area in the Bears Ears region designated as a national monument, with hopes that it would preserve the artifact-laden landscape and give tribes more control over its management. President Obama fulfilled that desire in late 2016, as he was leaving office. When Trump took over, he initiated an unprecedented review of 27 national monuments – which often upset locals who dislike restrictions on how such land can be used – and decided in December to shrink the Bears Ears National Monument by 85%. Opponents of the monument celebrated, while critics argued that it had essentially been abolished.

A car illuminates a dirt roadway leading into Monument Valley.
Ryan Shorosky for TIME
Willie Grayeyes is pictured in Bluff, Utah, one of the towns in Southeastern Utah where residents have been divided in their support of the monument. Grayeyes works with the Bears Ears Commission, a coalition of five tribes that was formed to help direct how the land in the national monument would be managed, according to plans laid out in the Obama proclamation. He has also been attempting to run for local office as a Democrat in San Juan County, where Bears Ears is located. The Republican-controlled commission has opposed the monument and officials have been seeking to prove that Grayeyes is not eligible to run. A new set of commissioners more sympathetic to tribes could work to support the monument. As it stands, the county has requested to join the Bears Ears lawsuit as a defendant, alongside President Trump.
Ryan Shorosky for TIME

“It’s been really traumatic for tribal members,” says Ethel Branch, attorney general for the Navajo Nation, “particularly for those who are right there on the ground and who have been fighting to have their voice heard for so long, and always facing a quieting of that.” The tribes’ lawsuit, one of several filed over the move, argues that President Trump did not have the authority to alter the monument. As it begins to work its way through the courts – parties are currently arguing over whether the case should be heard in D.C. or Utah – Bears Ears remains in limbo.

Fernando Cly, 40, is a tour guide in Monument Valley, a tribal park that stretches across the Utah-Arizona border inside the Navajo Nation. Tour guides there are Navajo and make their living from tourism in the area. In arguments over monuments, opponents often highlight economic activity that might be lost from restrictions on logging, mining and other industries. Proponents, in turn, highlight the revenue that will come from new visitors.
Ryan Shorosky for TIME
Alicia Sayetsitty, 5, in Monument Valley. Her stepmother Crystal, along with her two siblings, Yanabah and LJ, work most days selling handmade jewelry and native crafts at a roadside stand.
Ryan Shorosky for TIME

Photographer Ryan Shorosky, who has been documenting the connection between people and the land in the American West, has spent time with Navajo residents in this part of the Southwest. The tribe’s reservation sits right next to the contested area, encompassing parts of Utah, Arizona and New Mexico. As the battle unfolds, some Navajo fear that remnants of their culture, like ancient shelters or pottery, may be looted without the protections and potential resources that monument status provides. Others worry about the ramifications of mining being allowed in the region. Many continue to use the land in the same ways their ancestors did centuries ago, gathering firewood and medicinal herbs that grow there, as well as holding ceremonies. Noting that the area figures into the Navajo people’s creation stories, Shorosky says that Bears Ears “symbolizes their true home,” even though the land is owned by the federal government.

Jonah Yellowman, a Navajo medicine man, is a spiritual adviser to Utah Diné Bikéyah. That work includes activities like organizing a traditional ceremony to bless the lawyers who are fighting the legality of Trump’s order. Like many who live in the area, he also takes trips to Bears Ears to collect plants and herbs for traditional and ceremonial use.
Ryan Shorosky for TIME
Yucca plants, left, are found in Bears Ears. One of the plants harvested from the area by Navajo tribe members, yucca roots are used for purposes such as making shampoo. Juniper, pictured here right on the Navajo reservation, is one of the native plants that tribal members collect in Bears Ears for religious and ceremonial use. In the tribes’ lawsuit, the plaintiffs write that, “Bears Ears is so culturally and spiritually significant that some ceremonies use items that can only be harvested from Bears Ears.”
Ryan Shorosky for TIME

After the Long Walk, American Indians were essentially held captive by the military for years, many perishing in squalid conditions. In 1868, tribe members negotiated a treaty that allowed Navajo people to return to portions of their ancestral homelands, where many still live today. The document will have its 150th anniversary on June 1. One of the signatories, Branch notes, was a Navajo chief named Manuelito, who was born in Bears Ears. She says the key connection between that hard-won agreement and the tribe’s current work to restore the monument is about resilience. “People maintain optimism,” she says. “No matter what difficultly we’ve faced, we’ve always overcome that and reasserted ourselves.”

Teenage brothers Deion Salazar and Syrus Yazzieplay basketball in Oljato, Utah - a few miles from Monument Valley. Oljato was a major source for uranium mining in the 1940's and 50's causing serious health concerns for many of its residents.
Ryan Shorosky for TIME
James Adakai, a Navajo tribal leader and commissioner, in front of the Big Chief Mesa in Monument Valley.Adakai was selected as commissioner of the Bears Ears Coalition to protect the land during Obama's presidency. Now residing in Window Rock, AZ, he frequently makes hour long trips to Monument Valley and Bears Ears for meetings and efforts towards the fight to protect the land.
Ryan Shorosky for TIME

Ryan Shorosky is a photographer currently based in Los Angeles. His work focuses in and around themes intrinsic to the American West. You can follow him on Instagram @ryshorosky

Tara Johnson, who edited this photo essay, is Senior Producer at TIME. You can follow her on Instagram @_tara_johnson