On Monday, President Donald Trump traveled to Utah, where supporters greeted him at the airport and protestors were awaiting him at the state capitol with signs like, “Keep your tiny hands off our public lands.”

The purpose of the trip was to announce that two national monuments in the state would be shrunk, following an unprecedented review of federally-protected landscapes earlier this year. “We’re going to Utah,” Trump told reporters as he boarded Marine One in Washington, D.C., Monday morning. “It will be one of the great, really, events in this country in a long time.”

When he arrived, Trump signed proclamations that downsized areas known as Bears Ears and Grand Staircase-Escalante by about one million acres each, splitting those two monuments up into five smaller ones. With that stroke of his pen, Trump also set the stage for a historic legal fight.

Interior Secretary Ryan Zinke led the review of 27 monuments stretching from Maine to California, and he recommended in August that the boundaries of six be altered. Several groups vowed to sue if Trump followed that advice, arguing that the president does not have the authority to significantly change monuments declared by his predecessors. And they started making good on those promises immediately following his announcement.

Within hours of Trump’s action, Earthjustice, an environmental organization, filed a lawsuit challenging the reduction of Grand Staircase-Escalante, an area rich in dinosaur fossils named for a series of descending plateaus. Also on Monday, five Native American tribes filed a lawsuit challenging the reduction of Bears Ears, an area sacred to tribes that is named for two ruddy plateaus that rise above rock art and cliff dwellings. Also preparing a lawsuit is outdoor retailer Patagonia, according to CEO Rose Marcario, who has said that fighting for the protection of public land is part of the company’s corporate DNA.

Presidents have been proclaiming national monuments since 1906, when Congress passed the Antiquities Act. Faced with looting at cultural sites in the West, lawmakers delegated some of their authority over the nation’s land so that presidents could act quickly to protect areas that might be in danger. When land is declared to be a monument, it typically comes with restrictions about how the land can be used, whether that means bans on mining or logging or riding ATVs.

Though manmade things like pottery may have been top of mind for lawmakers when the act was passed, Teddy Roosevelt quickly used the law to protect the 818,000-acre Grand Canyon, setting a precedent for the protection of whole landscapes. (Congress later made the area into a national park.) Since Roosevelt’s time, the act has been used by presidents from both parties to declare 157 monuments, ranging from Giant Sequoia trees in California to a rare underground pool in Iowa to a historic bar in New York City.

Presidents, including Woodrow Wilson and Franklin Roosevelt, have also shrunk monuments during the last century. But those preparing lawsuits stress that such actions have never been challenged in court and note that the right to alter monuments is not expressly laid out in the law. While some legal experts have argued that the power to change monuments is implied — as many presidential powers are — others argue that Congress meant to reserve the right to modify monuments for itself.

Assuming this issue is settled in court, a win for the Trump Administration could clarify that he or any other president has the right to unilaterally remake monuments throughout the country. Conservatives have grievances of their own about the use of the law that will be central to the case, arguments that spurred the review and Trump’s decision to downsize the contested areas in the first place.

A requirement that is expressly spelled out in the Antiquities Act is that a monument must be the “smallest area compatible” with protecting the objects of scientific or historical significance that prompted the designation. Critics say Democratic presidents have set aside areas that are much bigger than they need to be, including Bill Clinton’s designation of Grand Staircase-Escalante and Barack Obama’s designation of Bears Ears. Originally each was bigger than the state of Delaware.

“It has been abused,” Utah Rep. Rob Bishop told TIME about the Antiquities Act, “to a point where it no longer deals with protecting antiquities but with making political statements.”

A win for the challengers could mean that the bar for altering monuments is higher, perhaps requiring legislative action. In a conference call about the lawsuits preceding Trump’s trip, New Mexico Sen. Tom Udall called the new proclamations “the largest attack on public lands … we have ever seen.” The Democrat also said that the president is “using never tested and dubious legal authority” that could put energy development back on the table for the area.

Natalie Landreth, a representative for the Native American Rights Fund, argued that the changes Trump is making are so significant that they constitute a “revoke-and-replace.” No president has outright revoked a monument established by another commander-in-chief before, and so such action has not been challenged in court either.

Given all the interests at play when it comes to the usage of public lands, from the rights of ranchers to archaeologists, it’s unsurprising that monuments have been controversial since the very beginning. Roosevelt’s designation of the Grand Canyon, for example, ended up being affirmed by the Supreme Court after a disgruntled miner filed suit.

Opponents of monuments often paint them as a “land grab” because of new rules that get laid out in presidential proclamations (even though monuments can only be declared on land the federal government already owns). Supporters tend to celebrate those same rules as a means of preserving landscapes that are rich in natural beauty or historical artifacts. The values of economic development and conservation will likely be pitted against each other as the legal action goes forward. It’s a common debate in the West, where the federal government owns huge tracts of land, including nearly two-thirds of the Beehive State.

While the legal landscape is still taking shape, multiple groups have said that the Navajo Nation plans to lead the fight in Bears Ears because Obama originally protected the land at the behest of Native American tribes. Their representatives push back on the notion that Bears Ears was bigger than it needed to be in order to protect items of significance in the area. “If any land grab happened,” Ethel Branch, attorney general for the Navajo Nation, told TIME, “it was the grab that took those lands from us in the first place.” 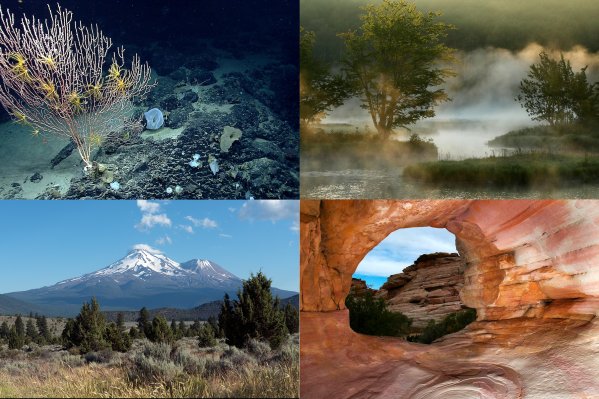 These 10 Photos Show Off the National Monuments Trump May Target
Next Up: Editor's Pick