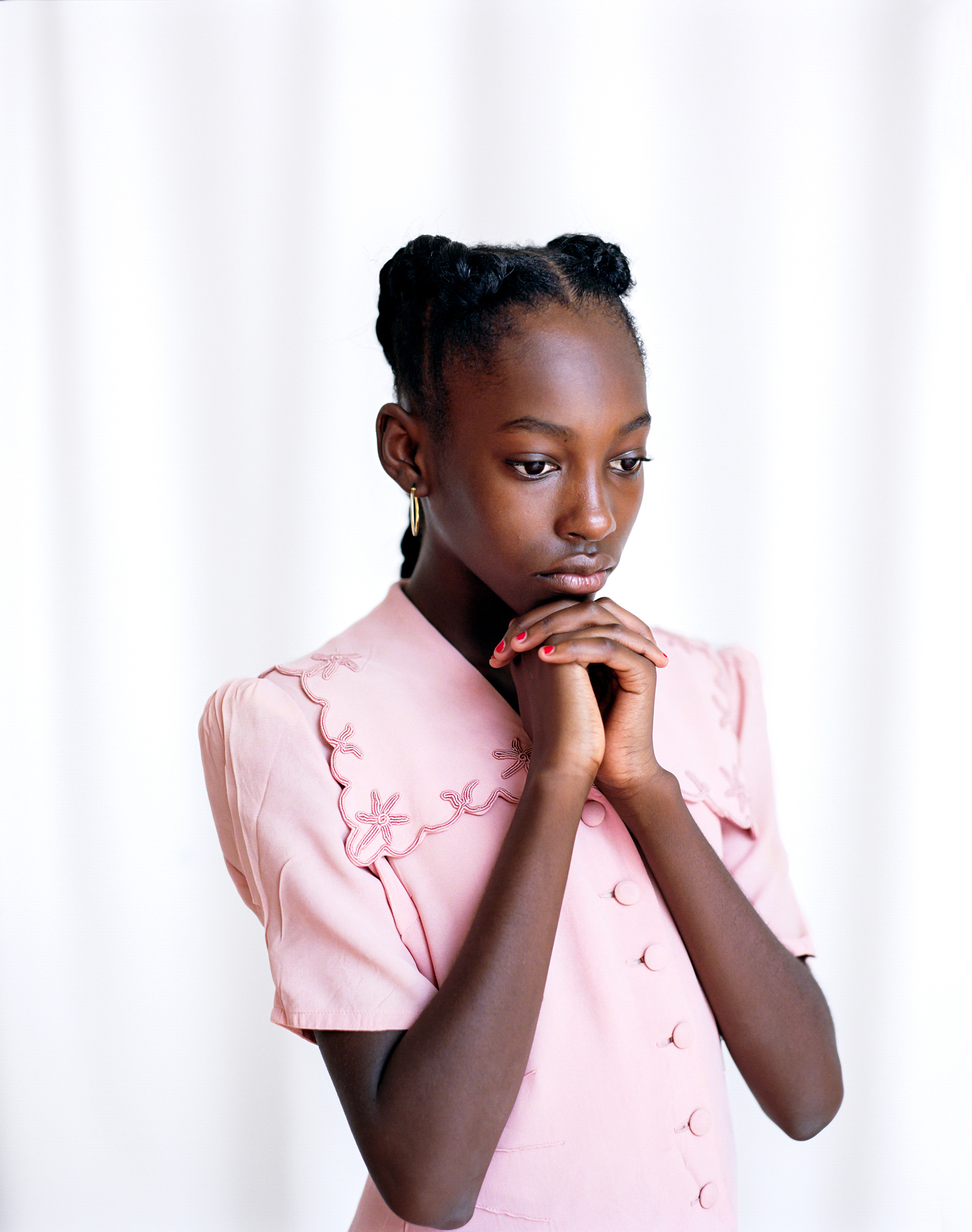 Jamilah Muhammad, 13, reflects on her scene in a reenactment of the 1946 Moore’s Ford Bridge lynchings in Walton County, Ga., of two black couples. “While we were rehearsing, I started crying,” she says, on Sept. 10, 2017. “I couldn’t imagine seeing my mom killed or living without her… this wasn’t a made-up story. This really happened.”
Johnathon Kelso

How the South Memorializes — and Forgets — Its History of Lynching

Between 1877 and 1950, more than 4,400 black Americans were killed by lynching in the United States. Our nation has always preferred to ignore this brutal reality. Recently, however, Americans have shown a greater willingness to recognize lynching for what it was — not simply a series of “incidents,” but a systematic regime of racial terror.

At the places where lynchings occurred, though, there are seldom markers to explain what happened there. Yet as I argue in my book, [tempo-ecommerce src=”https://www.amazon.com/Courthouse-Lawn-Revised-Confronting-Twenty-First/dp/0807023043/&#8221; title=”On the Courthouse Lawn” context=”body”], lynching had devastating effects on those communities that still resonate. I encourage these local populations to do the hard work of identifying how to repair the damage that remains locked in the DNA of the countless hometowns where these horrifying events occurred.

Participants in the Moore’s Ford Bridge Reenactment arrive at the First African Baptist Church in Monroe, Ga., on July 22, 2017, for the 13th annual reenactment of the lynchings.
Johnathon Kelso
A tree in Phillips County, Ark., where a hanging may have occurred during the 1919 Race Massacre, one the deadliest mass lynchings in U.S history.
Johnathon Kelso
Ora Scaife reflects on the atrocities committed during the 1919 Race Massacre in Philips County, Ark., in which over 200 African Americans were murdered within a three-day span. Scaife and her family have lived in Phillips County for generations. But specific stories surrounding the massacre were not passed down. When she was a child, Scaife’s family would whisper at the kitchen table about the massacre and send her back to bed if she was caught listening.
Johnathon Kelso

In most cases, that work has fallen to local activists, amateur historians and descendants of victims and witnesses. These unheralded people — and the places they struggle to consecrate — are the subject of the photographer Johnathon Kelso. In his series, A Song Without Words, he examines the history of racial violence that lies just beneath the surface of the present and the ways that contemporary Americans try — or fail — to grapple with that history.

Kelso calls lynching “a huge, gaping wound” in the South, one rarely discussed in the open. A native of the region, he himself knew little about the lynchings before embarking on this project. “When I began, I thought it was just the KKK and the fringe” who were responsible, he says. “But I quickly realized through research … that these crimes were carried out by the entire community on Sunday after church.”

Brittany Roseberry as Mae Murray Dorsey, one of the four people lynched at Moore’s Ford Bridge, during the final scene of the Reenactment, in which a white mob makes a countdown in front of hundreds of spectators. Their weapons then blast, as a sound system plays a recording of machine-gun fire in the distance. “I felt a heavy sadness,” Roseberry said. “To be alone, with nobody there, it’s an awful way to die.”
Johnathon Kelso
Dequincy Wilson sits on the steps of an old general store located in downtown Elaine, Ark. The community rarely brings up the 1919 Race Massacre, and the younger generation has little to no remembrance of the town’s convoluted history.
Johnathon Kelso
A photograph sits in the home of Noni Snipes, in Butler, Ga. Snipes is the niece of Maceo Snipes, a WWII veteran and the first African American to vote in a Democratic primary in Taylor County, Ga. He was lynched the day after casting his ballot.
Johnathon Kelso

A community’s initial response to a lynching in its midst was often silence — silence, Kelso says, that “carries through generations.” In Elaine, Ark., site of a three-day massacre that claimed 200 black lives, Kelso found a community still burdened by its inability to discuss what happened there almost a century ago. “Elaine and Phillips County is one of the poorest regions in Arkansas,” he says. “The schools are shut down in the area, there’s hardly any jobs available, the town itself is completely segregated. No one, except for a couple of people, are acknowledging this horrible event that happened. … It just left me with a dark feeling of what this town has carried for so long.”

In Monroe, Ga., by contrast, Kelso documented an annual reenactment of the 1946 Moore’s Ford lynching, which draws more than a hundred community members each year. “Young boys, young girls — black and white — come and watch this,” Kelso says, adding that the sight provided an uncanny echo of images he’d seen of lynching audiences that included children. “It rights the wrong in the past, where these young members of the communities might grow up and not have to hide from this history.”

A tombstone is shaded at the site of possible mass graves in Elaine, Ark.
Johnathon Kelso
Two teenagers embrace in Lawrenceville, Ga. Every weekend, the community enjoys free movies at the downtown square, where in 1911 Charlie Hale was lynched in broad daylight. Few people today seem to remember the killing. In a souvenir photo postcard taken after Hale’s death, crowds of white men, hound dogs and young boys surround the dead corpse; a sign attached to his toes reads, “Please do not wake him.” In 1993, a local Sons of Confederate Veterans group erected a monument on the square to memorialize the Confederate dead; the inscription reads, “Lest We Forget.”
Johnathon Kelso
Cynthia Rintye, the director of Lawrenceville Ghost Tours, visits the old county jail in Lawrenceville, Ga., which is believed to be where Charlie Hale was detained before his lynching. The story of his death can be heard on the walking tour, which adapted the events and includes a stop at the jail, every night in October for $15. A training pamphlet for tour guides directs that if a child under the age of 10 asks what a lynching is, you could say, “It’s something that’s very bad but we’re lucky it doesn’t happen anymore.”
Johnathon Kelso

A Song Without Words reminds us that history is as much a battleground in the struggle for justice as a courtroom or a legislature. Thanks to artists like Kelso, activists like Bryan Stevenson and grassroots organizations like Southern Truth and Reconciliation, among others, more Americans are beginning to understand the truth about lynching. But there are still many who would rather not talk about what happened in thousands of communities for the better part of a century.

Just a few blocks north of the Smithsonian Museum of African American History & Culture, which houses the casket of 14-year-old lynching victim Emmett Till, who was killed 63 years ago to this day, the Oval Office is occupied by a president who refused to condemn the white supremacists who marched openly through Charlottesville, Va., last summer. And just weeks before the April opening of the National Memorial for Peace and Justice — the nation’s first memorial to the victims of white supremacy, which features a cloister of 800 steel columns, each etched with the location and date of a lynching, along with the victim’s name — Alabama’s governor vowed to protect her state’s Confederate monuments from removal. “We must learn from our history,” she said, with no apparent irony.

The public square is where we tell the story of ourselves. The statues and monuments we place there suggest who we were and who we wish to be. But what we choose not to put there is equally revealing. The lack of lynching memorials in our public spaces speaks volumes about our enduring fear and paralysis in the face of our past’s darkest chapters.

Rodkevian Thomas, an intern with the Emmett Till Interpretive Center, visits the restored service station adjacent to the dilapidated Bryant's Grocery in Money, Miss. On August 24, 1955, 14-year-old Emmett Till was visiting Bryant’s Grocery when he was accused of violating the racial customs of the time by whistling at a white woman. He was then kidnapped, beaten and, on Aug. 28, lynched.
Johnathon Kelso
Atlanta jazz singer, Ja’Naan, sings Billie Holiday’s "Strange Fruit" during the final scene of the Moore’s Ford Bridge Reenactment on July 22, 2017.
Johnathon Kelso
The site of Till's torture, in Drew, Miss., is now the home of a white man named Jeff Andrews. He often gets visitors to his property and always obliges their requests.
Johnathon Kelso

It doesn’t have to be this way. There is much to gain from re-imagining a more inclusive narrative of who we are in our public spaces. An honest engagement with the truth — with, for example, the paradox that countless lynchings took place on the lawns of courthouses in towns across the South — offers us a chance to reckon with the inequities that continue to plague our society today. “In order to move forward, one would have to ask where we’ve been,” Kelso says. “And where we’ve been is a place that no one should ever go, and we have to understand how we got there.”

Johnathon Kelso’s stirring photographs show us that facing our history is not simply a matter of revising textbooks or opening museums. We must also look squarely at the episodes of racial terror that occurred in unassuming places. History lives in silent fields and lonely country roads. By embracing that history — by being honest about where we have fallen short of our professed ideals — we can draw closer to a future where every American enjoys equal protection of the law. — Sherrilyn Ifill

Gene Bowen holds a photograph of his parents at his home in LaGrange, Ga. Bowen was six years old when he awoke on a Sunday morning in 1940 to find his parents outside the home attending to a young African-American man, Austin Callaway, found bleeding to death on their property. The family wrapped the unconscious man in a bed sheet and rushed him to the local hospital, where he succumbed to his wounds. Callaway had been arrested the evening before. An armed group of hooded men snatched him from police custody without resistance, drove him to the edge of town, shot him multiple times and had left him to die.
Johnathon Kelso
A father holds his sleeping child on May 21, 2017, during a ceremony hosted by the Lynching Sites Project of Memphis to commemorate the centennial of the Ell Persons mass spectacle lynching, considered among the most brutal in American history. At the time, the killing was described as a carnival. In 2017, more than 500 people came out to pray and mourn together.
Johnathon Kelso

Sherrilyn Ifill is the President and Director-Counsel of the NAACP Legal Defense and Educational Fund, Inc., and the author of [tempo-ecommerce src=”https://www.amazon.com/Courthouse-Lawn-Revised-Confronting-Twenty-First/dp/0807023043/&#8221; title=”On the Courthouse Lawn” context=”body”], which was re-released by Beacon Press earlier this month.

Kara Milstein, who edited this photo essay, is an associate photo editor at TIME Magazine. Follow her on Instagram @karamilstein.

The original version of this story misstated the number of years since Emmett Till’s death. It has been 63 years, not 53.