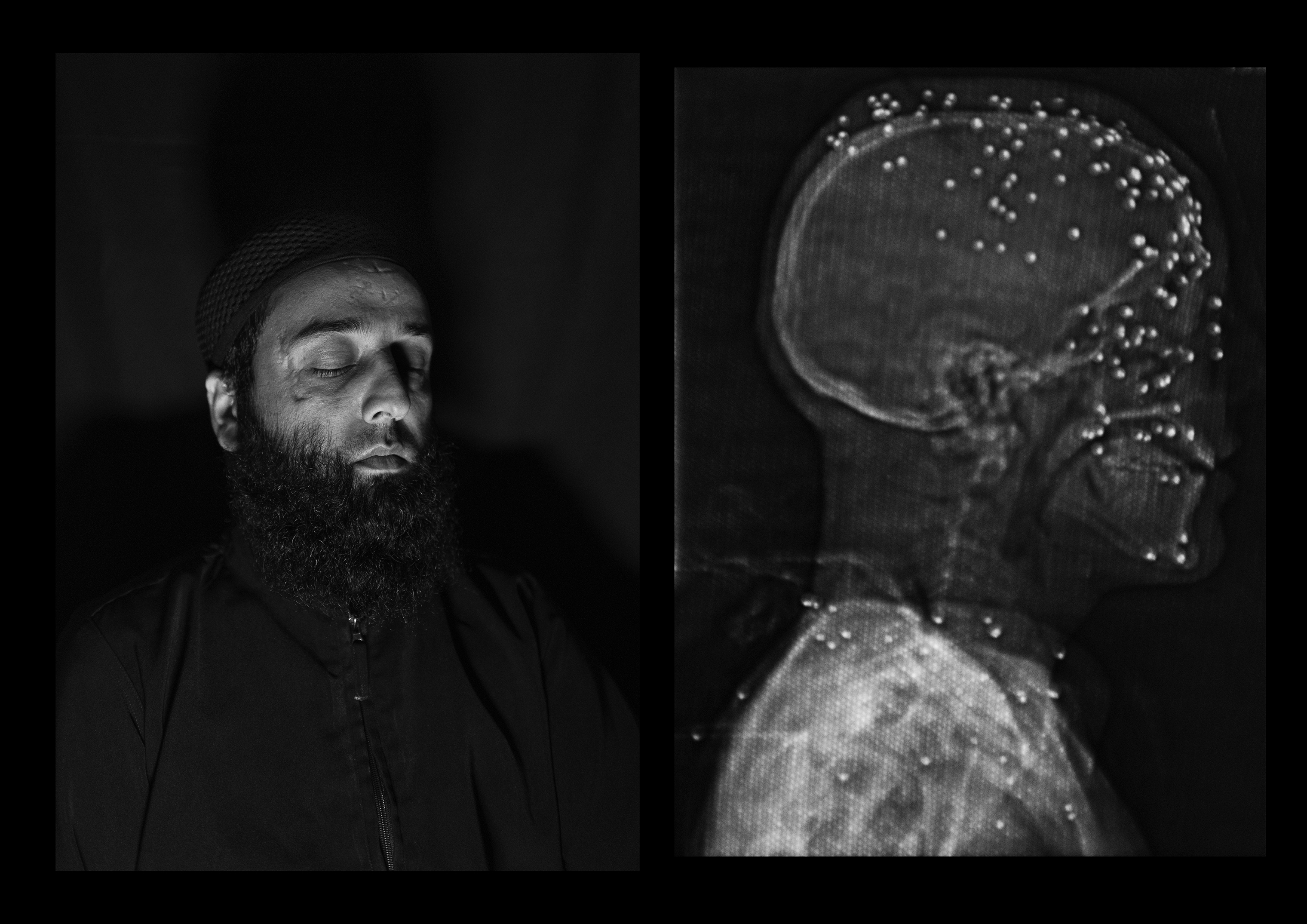 Amir Kabir Beigh, 26 years old, Baramulla. “I have gone through a lot of surgeries all over India but I am still completely blind".
Camillo Pasquarelli

Faces in the Darkness: The Victims of ’Non-Lethal’ Weapons in Kashmir

At first glance, their scars look like pockmarks. Some have their eyes closed; others have a far-away look, eyes glazed over. They could be gazing out at a distant view.

Their injuries weren’t caused by ordinary bullets. Security forces in the disputed region of Kashmir haven’t used those to police demonstrations since 2010, when they fired on protesters and killed 112 people. International outcry followed, prompting the Indian government to supply regional police and the army with pellet guns they called “non-lethal.”

Danish Rajab Jhat, 24 years old, from Srinagar. His left eye was unsalvageable, so doctors replaced it with an artificial eyeball. He still has 90 pellets inside his body and from his right eye he can barely see shadows.
Camillo Pasquarelli

The Kashmir valley, an area on India’s northern border with Pakistan in the state of Jammu and Kashmir, has suffered waves of intense unrest and sporadic violence since 1947, when the Hindu ruler of Muslim-majority Kashmir decided to join India rather than Pakistan. The most recent outbreak of violence began in 2016, when a popular rebel leader called Burhan Wani was killed by the Indian army. Protesters—some of whom threw stones—filled the streets of Srinagar, the state capital, denouncing “Indian occupation.” Security forces responded with pellet guns.

The name can make them sound like toys, but pellet guns cause very real injuries. Since 2010, pellet guns have reportedly killed 14 people in Kashmir, according to Amnesty International. “The Indian forces call it a pellet gun, but it is a pump action shotgun,” says a spokesman from the Omega Research Foundation, a U.K. based charity that monitors military technologies. The only difference is the type of ammunition: a cartridge with up to 500 tiny lead pellets, which disperse in all directions when fired. They are commonly used by hunters. “The ammunition is not designed for crowd control,” he says.

In the seven months following Wani’s killing in July 2016, over 6,000 people were injured by pellet guns, including 782 who suffered eye injuries, according to Amnesty. Most of the victims photographed by Pasquarelli, an Italian photographer who spent four months in Kashmir at the end of last year, were injured during that period in 2016. All said they were not involved in protests when they were shot.

Shabkal Nazir Waseem, 25 years old, from Bijbehera. Police left him with one hundred pellets all over his upper body when they shot him on the Muslim holiday of Eid. Two lodged in each eye, leaving him almost totally blind. Four people were blinded by pellet guns in Kashmir on the day he was shot, he told Pasquarelli.
Camillo Pasquarelli
Asif Ahmad Sheikh, 10 years old, from Anantnag. Asif received one pellet in his right eye, losing vision entirely on that side. He told Pasquarelli the injury has caused lots of problems at school.
Camillo Pasquarelli

Each of Pasquarelli’s subjects are still coming to terms with their blindness, including the loss of not just their sight but also their ability to go to school or to work. They told the photographer of their pain. Faiz Firdouz, 18, was hit by 20 pellets, two of which entered his right eye. “Why? What was my fault? Why [have] they ruined my career, my future?”

The guns are a new addition to an old conflict. The situation in Kashmir is complex and evolving. India and Pakistan both want the land—a buffer between one and the other, and a key source of water and hydroelectric power. Many Kashmiris themselves have long called for “Azadi” (independence) from both. The presence of Islamist insurgents in the conflict since the early 1990s has further complicated affairs. Separatists have complained violent extremism has damaged their credibility and the Indian army casts its work there as a counter-terrorism operation. As a result, Kashmir is one of the most highly militarized regions in the world.

If there’s one constant here, it’s suffering. According to Doctors Without Borders, 41% of adults in Kashmir have significant symptoms of depression. “The pain and suffering surrounds you. It’s everywhere when you go to Kashmir,” Pasquarelli says. “You know that, somehow, everyone you speak to is related to the conflict. Maybe his neighbor has been injured, maybe his daughter has been killed.”

Aquib Zahoor Pampore, 16 years old, from Anantnag. One pellet perforated the retina of his left eye; leaving him blind on that side. He told Pasquarelli he was forced to leave school because of his injuries.
Camillo Pasquarelli
Shakeela Begum, 35 years old, from Sheeri. She was hit by dozens of pellets on her chest and face. One entered her left eye and two hit her right eye. The pellets were shot from a very short distance and traveled beyond the retina, leaving her with only 10% of her vision.
Camillo Pasquarelli

Pasquarelli met pellet gun victims for the first time last October at a workshop in Srinagar for people who had lost their sight, held by the HELP Foundation, an NGO working with victims of the conflict. When darkness fell at 5 p.m. during the oppressive Kashmiri winter, he decided to take some portraits. But looking back over the photographs from that evening, Pasquarelli said, it was difficult to tell that his subjects were really blind.

It was only later that he saw an X-ray. While the complex and fragile machinery of the eyes doesn’t heal itself, the skin does—leaving only minor scars if victims are lucky. Doctors often decide that removing the pellets is too dangerous. They remain lodged into victims’ bodies, as permanent as their blindness. The first X-ray Pasquarelli saw was of Amir Kabir Beigh, one of Kashmir’s first pellet gun victims. “I mean, it’s crazy,” he said. “Hundreds of small pellets all over his head. It was then I realized I needed X-rays, to make the project complete and to balance the message that I want to convey.”

Following the spate of injuries in 2016 the Indian government said they would issue “deflectors”— attachments to stop pellets traveling upwards into people’s eyes. The official guidance is to shoot downward. But still, reports of eye injuries keep emerging.

“This weapon should not be used at all,” says the Omega Research Foundation spokesman. “No modification could make its use compliant with international human rights law and standards.” Those laws state the use of force must be strictly proportionate and targeted. Pellet guns, on the contrary, spit a cloud of lead in all directions, making it impossible to guarantee bystanders will not be injured.

Despite their devastating consequences, weapons that have the capacity to blind have nevertheless failed to generate much international attention. “My main goal is to raise some awareness,” Pasquarelli says. “This issue deserves to be heard.”

We tend to only be interested in weapons that kill, says Dr. Anna Feigenbaum, an expert at Bournemouth University, U.K., on the rise of what she calls “less lethal” (as opposed to “non lethal”) weaponry. “In the era of drones and missiles and police firearm killings, a pellet gun can seem frivolous,” she says. “Except when you’re looking at these kinds of images.”

Shahid Ahmad Wani, 16 years old, from Achabal. He was forced to end his studies after being hit by 93 pellets all over his body, with two in the left eye. After three failed surgeries he is now able to only see shadows. To the right of his portrait, his medical records are pictured.
Camillo Pasquarelli

Camillo Pasquarelli is a freelance photographer based in Italy.

Billy Perrigo is a reporter at TIME, you can follow him @billyperrigo.