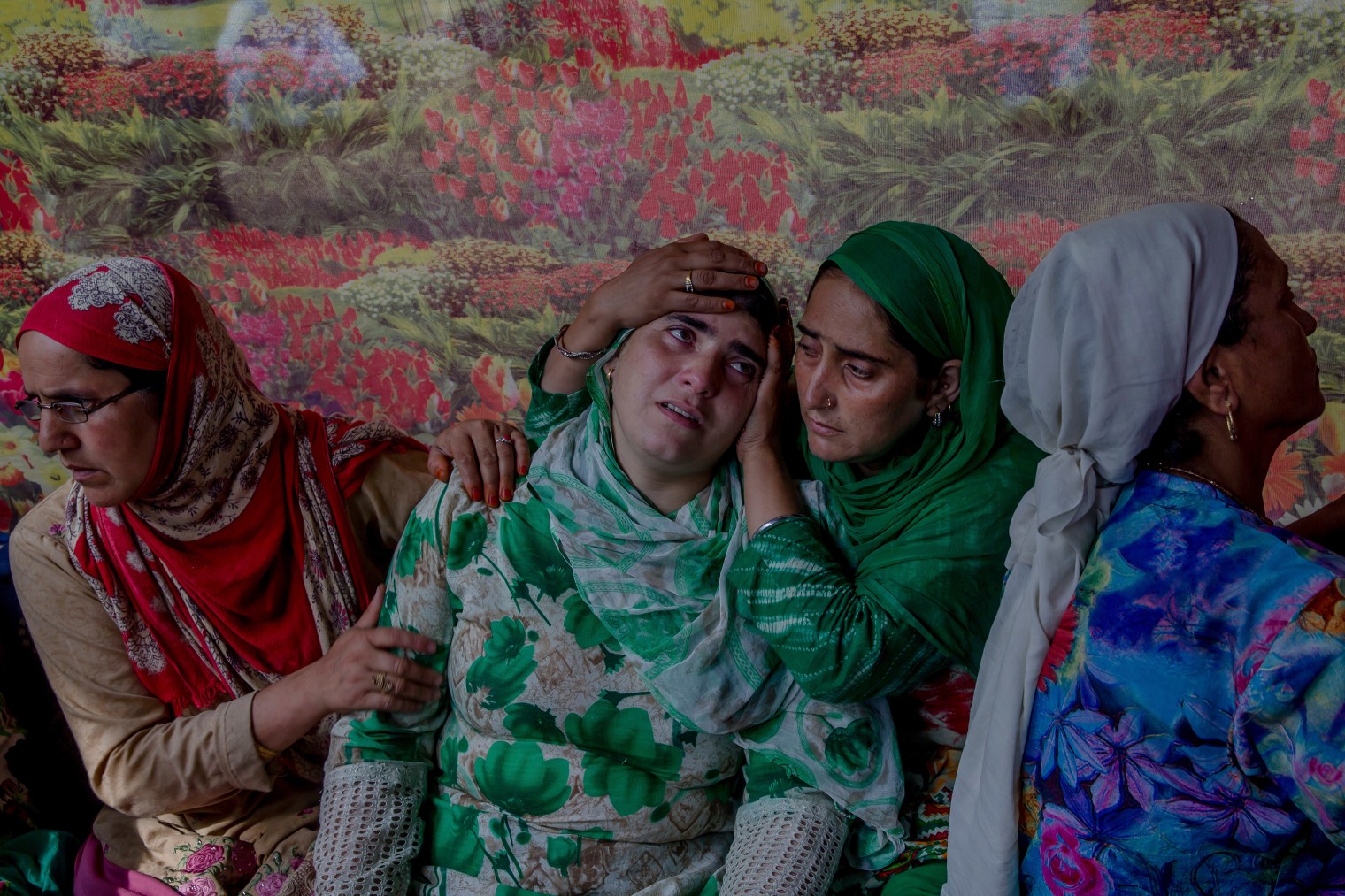 Relatives comfort the sister of a Kashmiri civilian, who was killed during a protest, south of Srinagar on Aug. 1. Dar Yasin—AP

In one photo, anguished relatives try to comfort the wailing sister of a Kashmiri civilian killed during a protest near Srinagar, the main city in the Indian half of disputed Kashmir. In another, a masked protestor dodges a tear gas shell fired by Indian forces. A third shows two masked protestors in a village just south of Srinagar. White powder is smeared across their faces. It’s salt, to protect their eyes from tear gas, says Dar Yasin, the award-winning Associated Press photographer who captured these portraits of the conflict in Kashmir over the summer, and for whom the Himalayan region isn’t just an assignment—it’s home.

Yasin was born and brought up in the northern territory that has been a source of tension, and the cause of three wars, between India and Pakistan ever since 1947, when the colonial British quit the subcontinent. A de facto border called the Line of Control divides the Muslim majority region between the two nuclear armed nations, both of which claim Kashmir in its entirety. 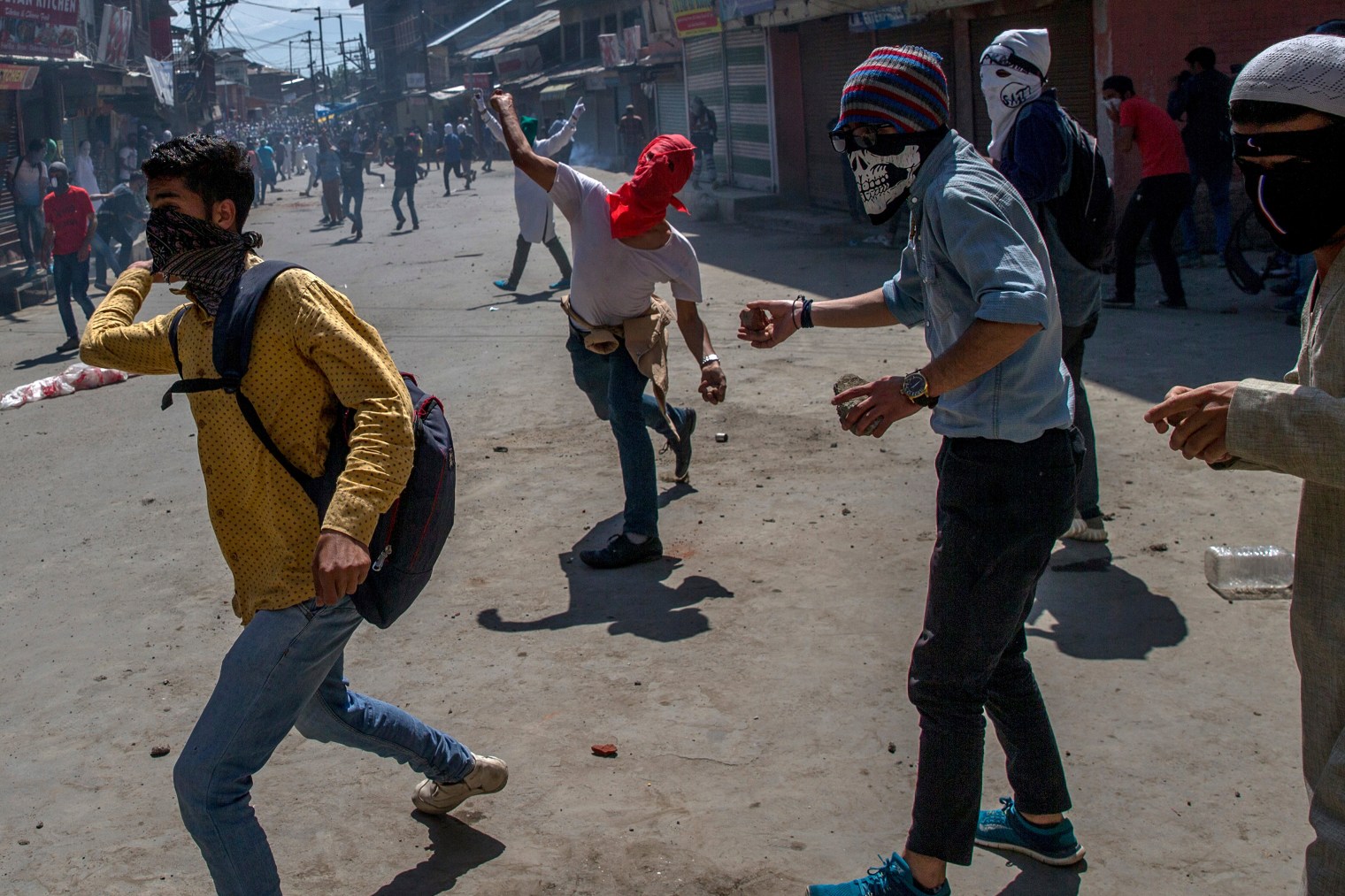 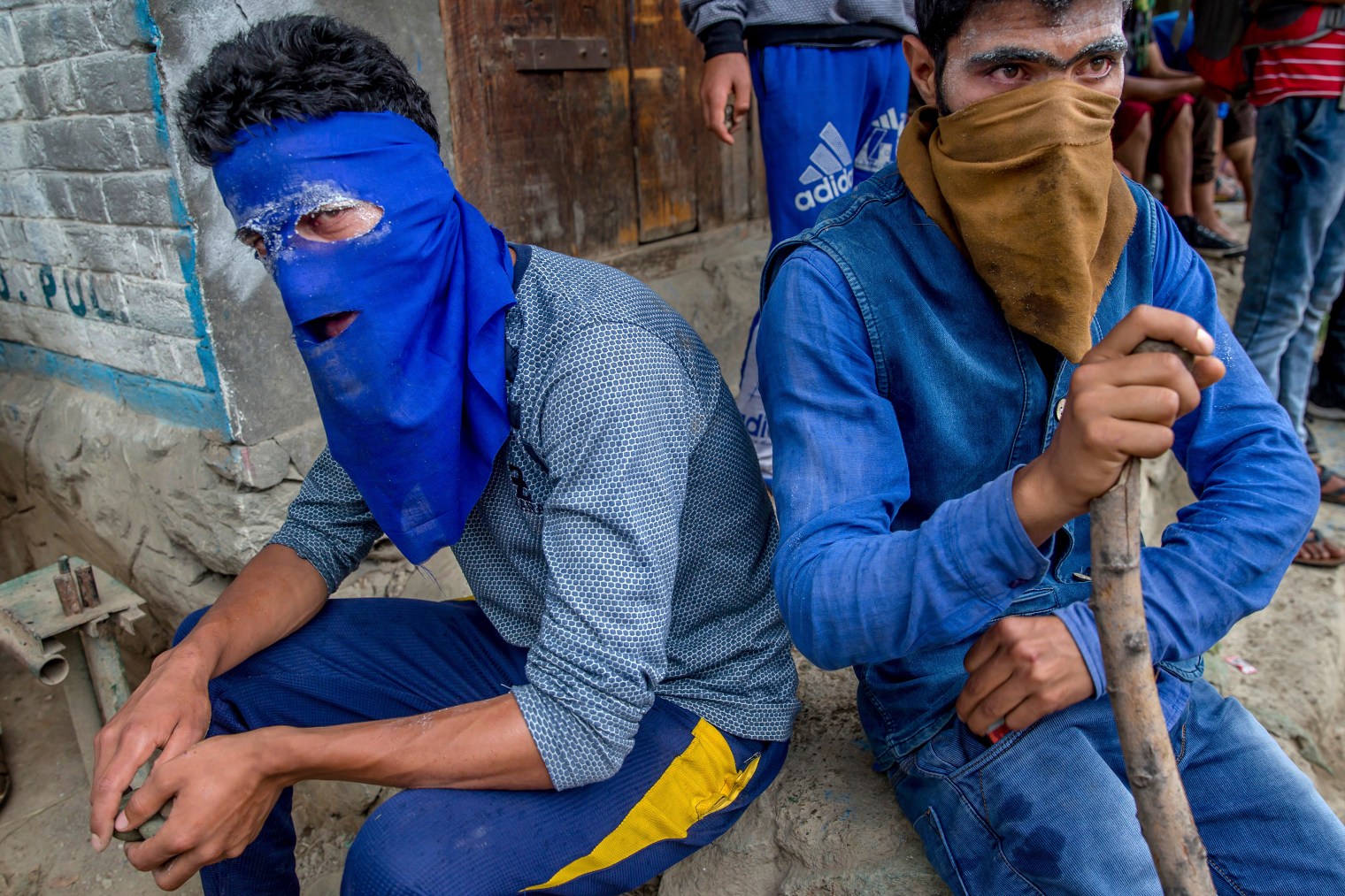 Kashmiri villagers take a break during a protest after the funeral procession of a teenage boy in Haal village, south of Srinagar, on Aug. 2. Dar Yasin—AP 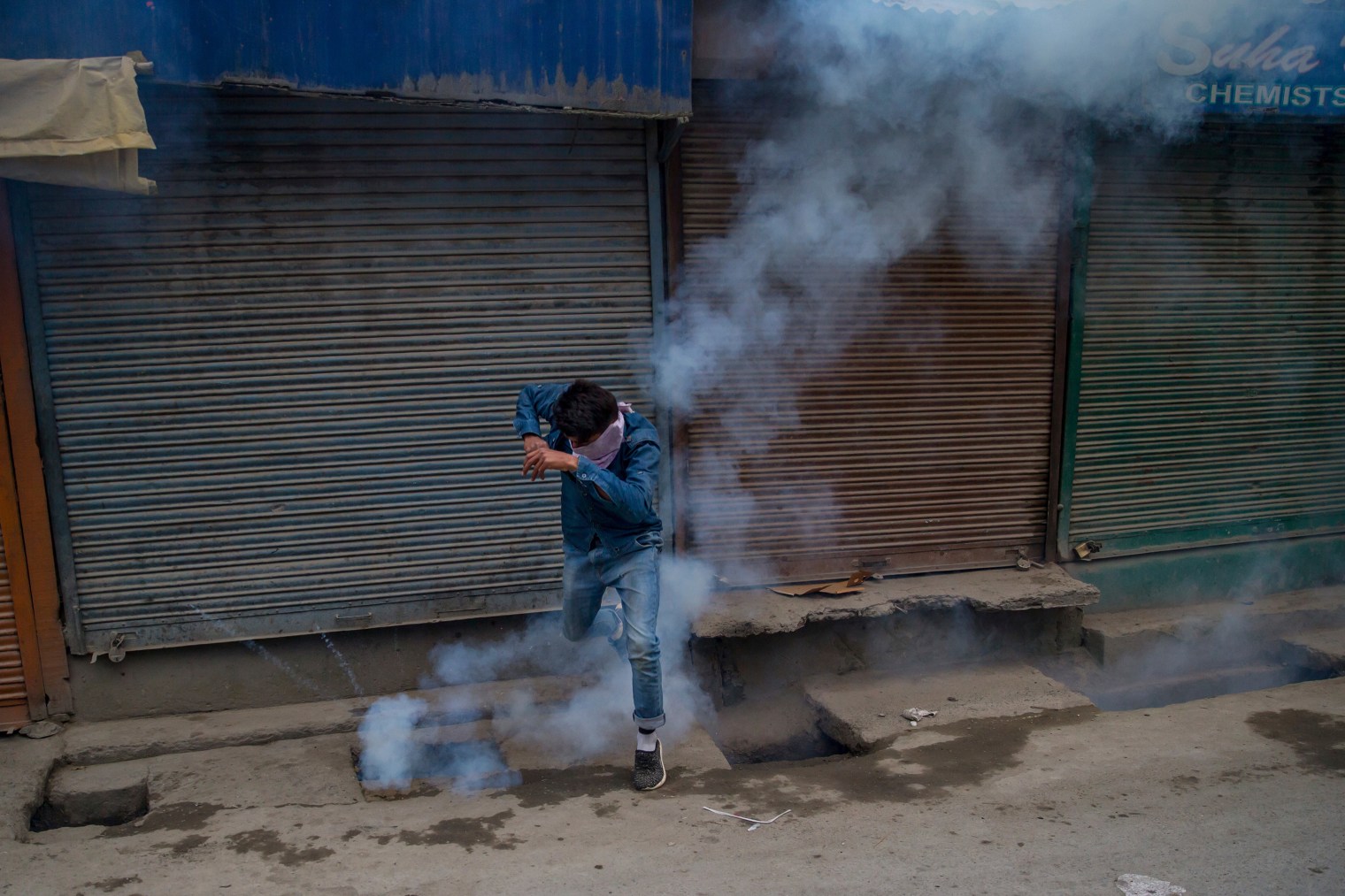 A masked Kashmiri protester avoids a tear gas shell fired by Indian policemen in Srinagar on May 26. Dar Yasin—AP

It is a part of the world where even peace time can resemble war. Although violence peaked in the 1990s—the bloody consequence, says New Delhi, of a Pakistan sponsored insurgency—hundreds of thousands of Indian soldiers and paramilitary personnel remained stationed in the Indian section. A special law gives these forces wide ranging powers to search, detain and shoot at civilians, an authority that rights groups accuse the Indians of misusing—and one that has bred an atmosphere of suspicion among young Kashmiris.

The result is that, even outside times of full blown conflict, the region suffers depressingly regular convulsions of violence, with cycles of protest against the security forces followed by crackdowns and military curfews that bring life to a standstill. For Yasin, who switched from shooting videos to taking photos in 2005, that makes the job of recording and reporting on the Kashmir story a daily task. “We cover this conflict day in and day out. It is our daily life,” he tells TIME. “It does not stop.”

Yasin has been a witness since he was a boy. “The first dead body I saw… I must have been in year five or six at school. There was a protest in Srinagar and 15 guys were shot, and one of the guys who was shot was my neighbor and he was shot right outside our home. It was back in the 80s,” says Yasin, whose elder brother and a cousin are also photojournalists. “We are a family of photojournalists. Growing up, we had a dark room at home.” 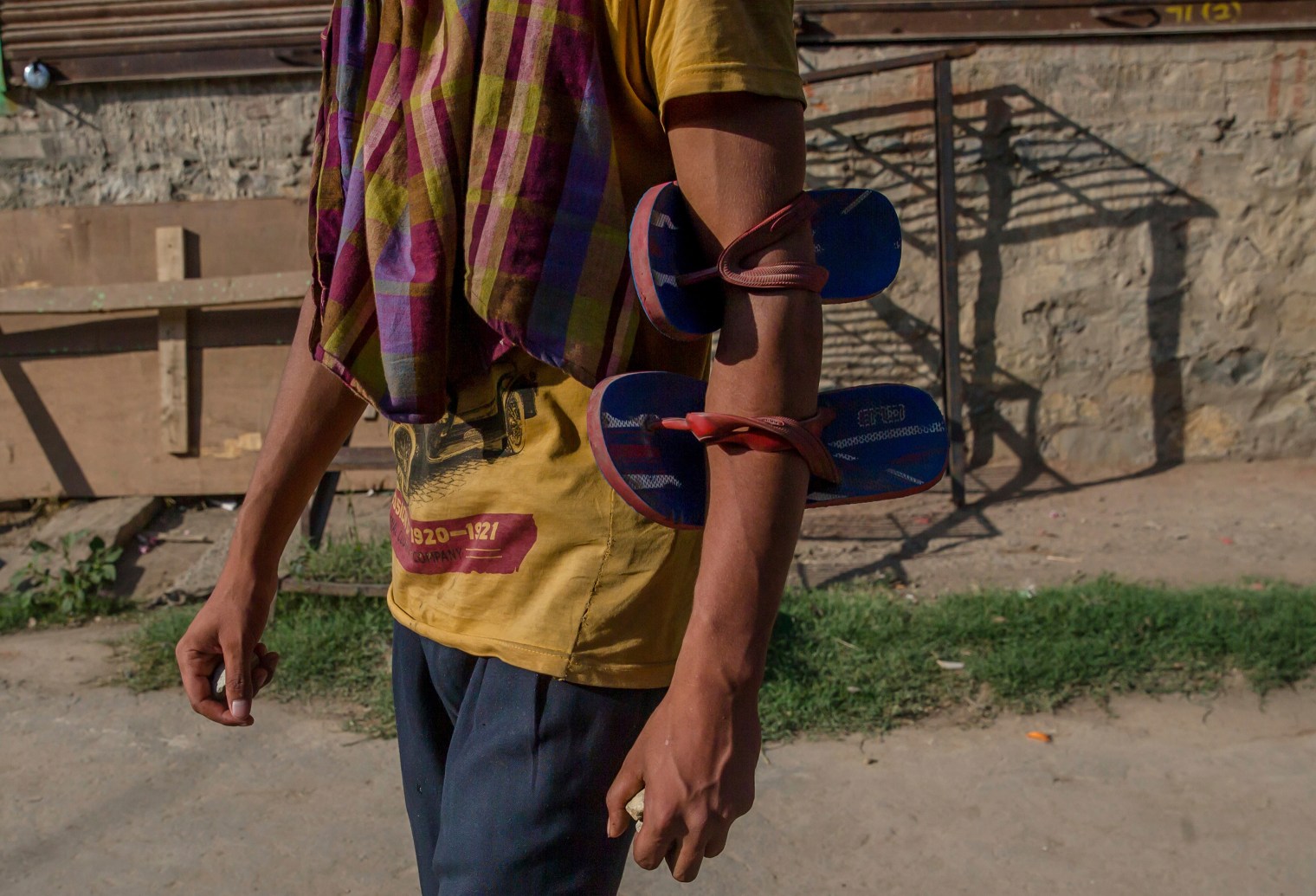 A villager, holding stones to throw at Indian policemen, wears flip-flops on his arm at a protest during the funeral procession of a civilian in Beerwah, west of Srinagar, on July 21. Dar Yasin—AP 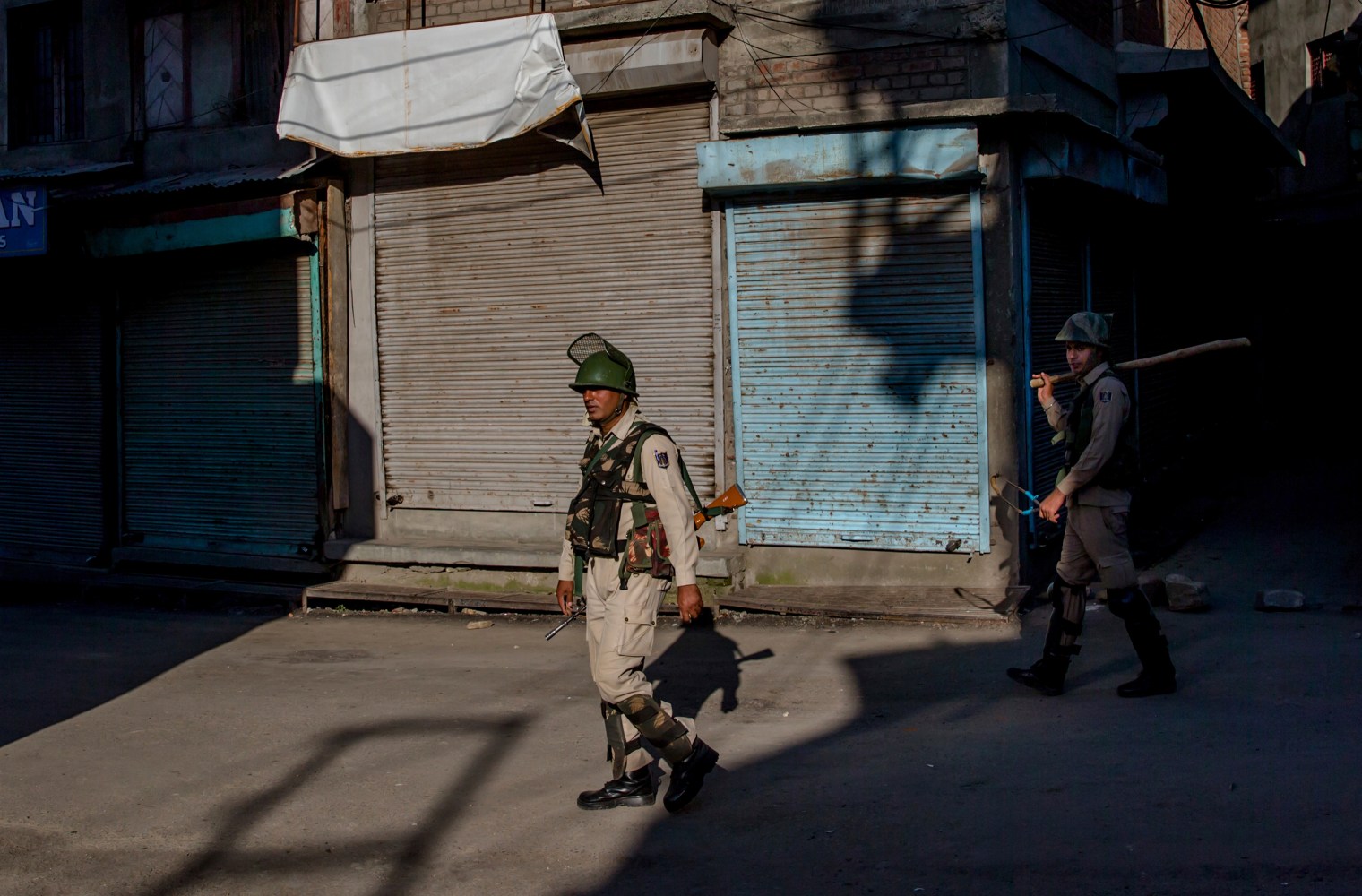 Indian paramilitary soldiers patrol during curfew, established in a bid to stop anti-India protests, in the downtown area of Srinagar on June 23. Dar Yasin—AP 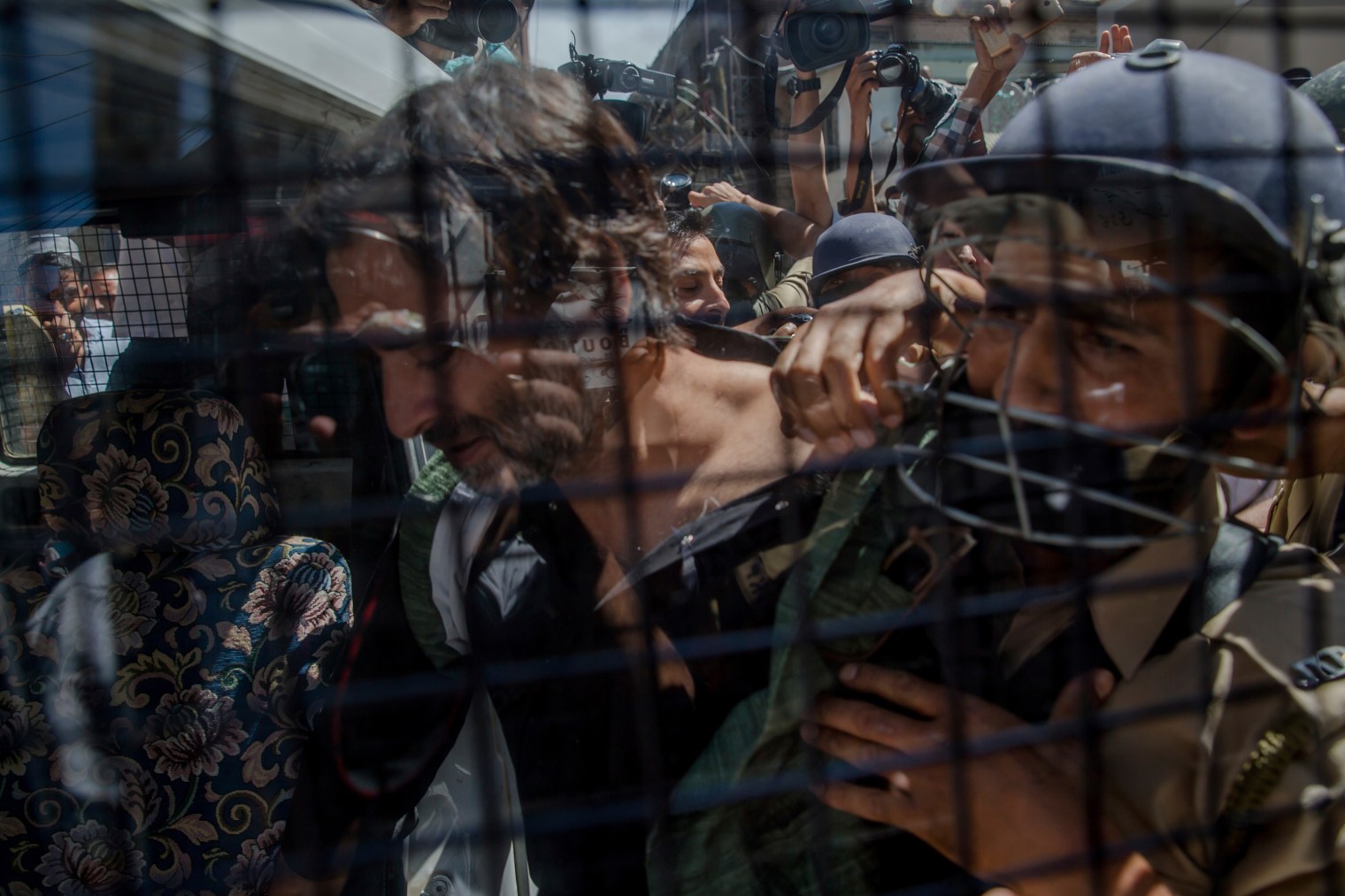 Yasin has seen the violence rise and fall, and then rise again. Figures from India’s interior ministry covering the India state of Jammu & Kashmir show that close to 14,000 civilians have lost their lives in the conflict since 1990, along with more than 5,000 security personnel. Last year saw a notable rise in tensions, as the region erupted in protests following the killing by Indian security forces of a popular militant commander. According to a written statement by a government minister tabled in India’s parliament in July, close to 9,000 civilians were injured and 85 were killed in unrest in the Indian administered section in 2016.

That compares to just over a 1,000 injured and 112 civilians killed in 2010. An additional 21 died between January and early July this year. (Others estimate a higher death toll for 2016. Citing figures from the Jammu Kashmir Coalition for Civil Society, a local advocacy group, India’s Hindustan Times daily reported that as many as 145 civilians died in last year’s unrest, compared to 172 in 2010.)

Like other journalists, Yasin has often found himself caught in the crossfire. He recounts an incident from July, when he was in a small Kashmiri town covering the funeral of a civilian killed in the violence. “I was in the crowd as it was moving with the body when the security forces came and started shelling,” he says. Yasin was injured in the ensuing confusion, as the crowd began to scatter. “I fell down and had to get stitches on my hand,” he says. 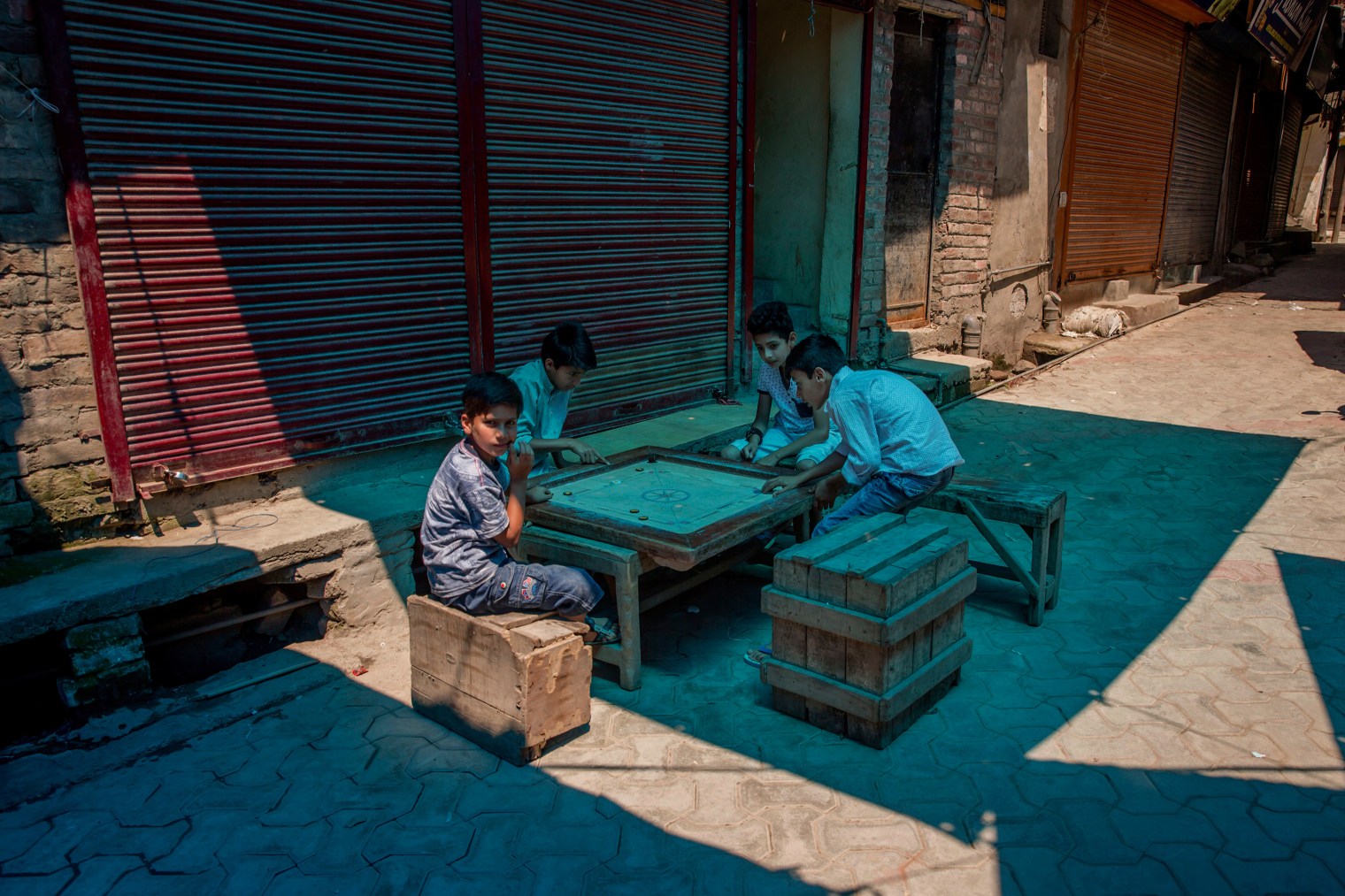 Boys play on a road during a general strike in Srinagar on June 9. Dar Yasin—AP 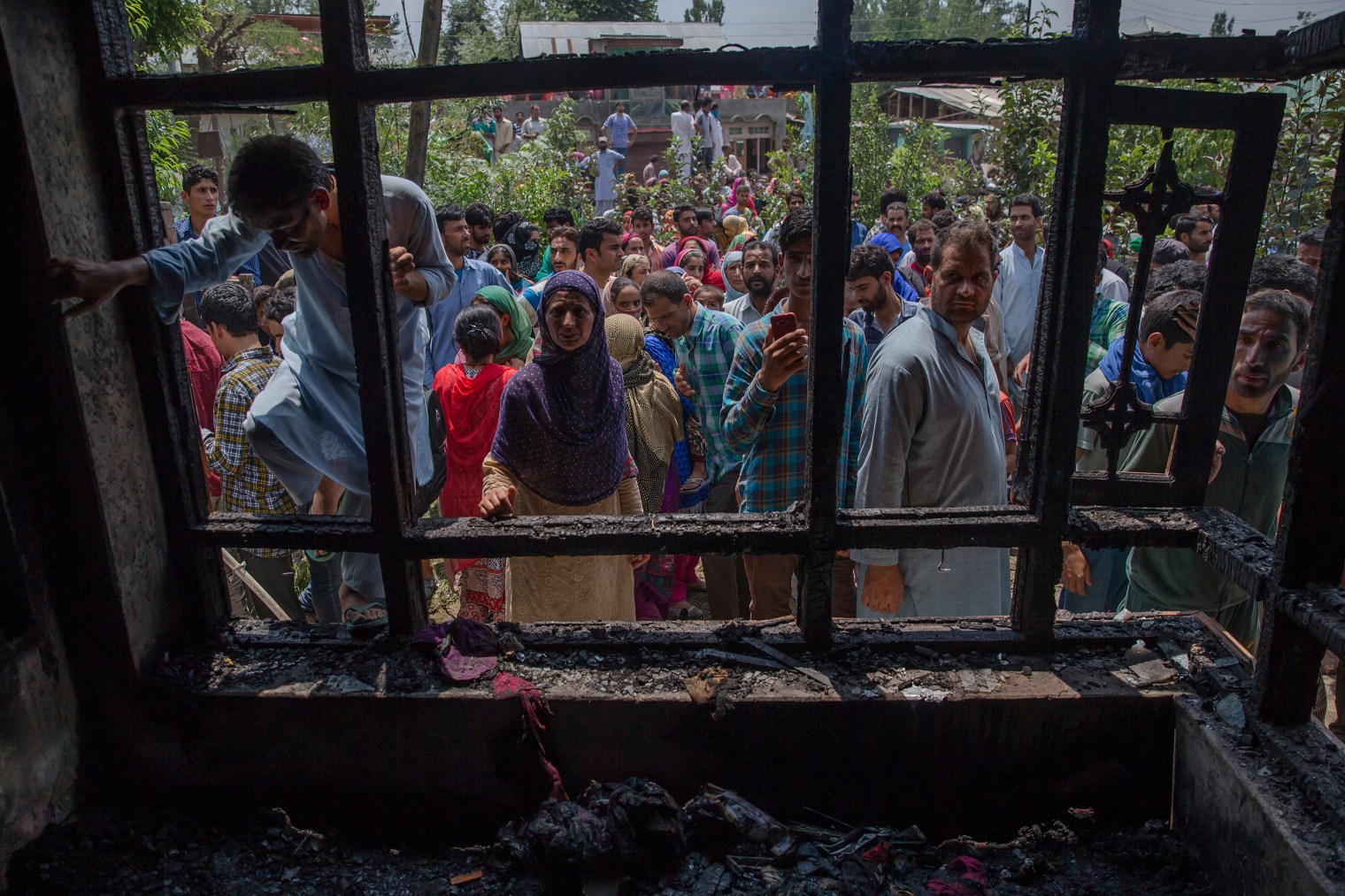 Villagers inspect a house damaged during a gun battle between Indian soldiers and suspected militants in Hakripora, south of Srinagar, on Aug. 1. Dar Yasin—AP 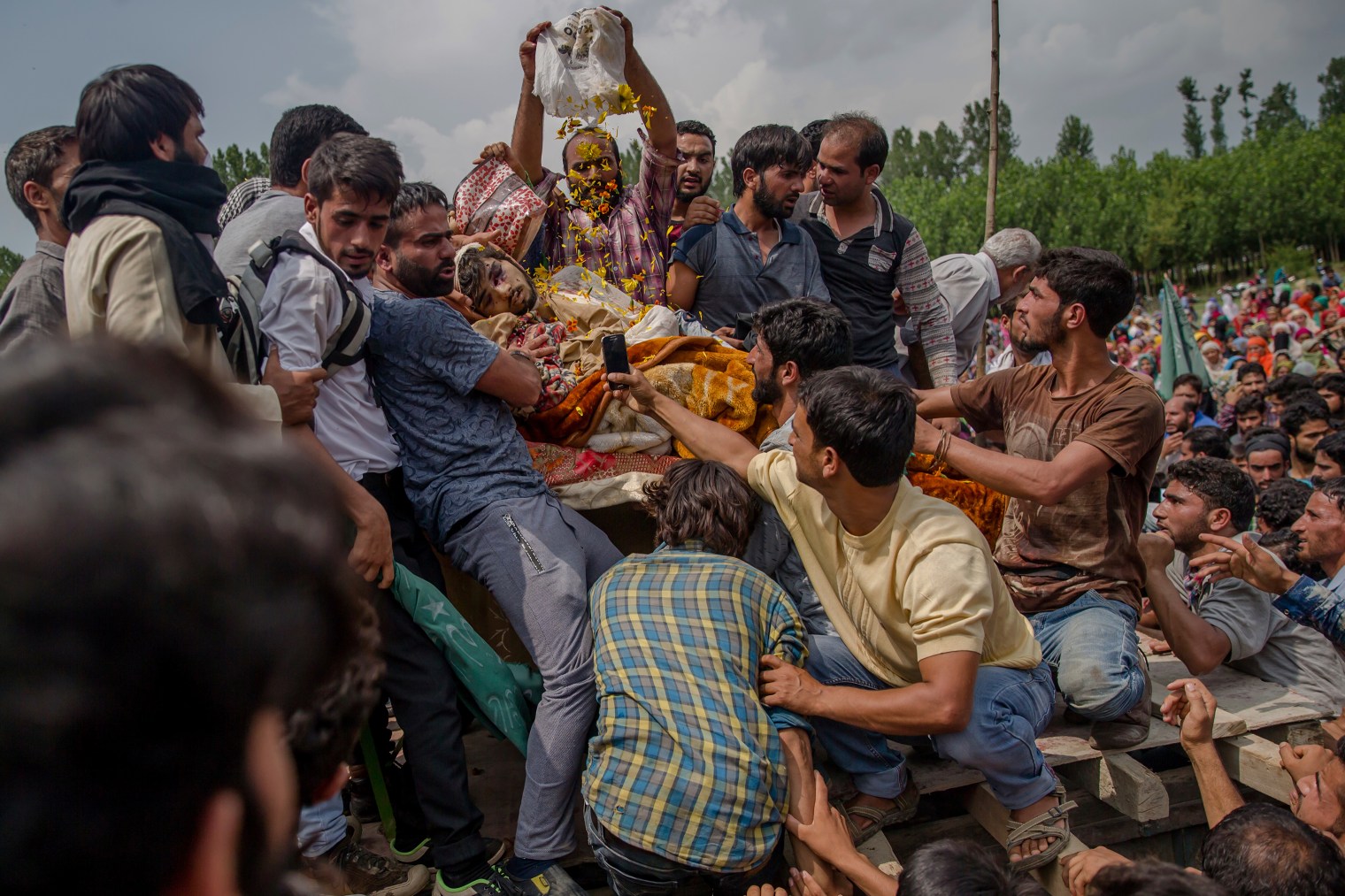 A villager showers flower petals over the body of a senior militant during his funeral in Lilhar, south of Srinagar, on Aug. 1. Dar Yasin—AP

Yasin contrasts covering the conflict in Kashmir, his home, with going on assignment in another conflict zone. “We were in Afghanistan recently, to cover the war there. It was different. We were there to cover one particular story, we had one thing in mind,” he says. “We don’t know it in the same way and we had to be more careful. We were always aware that this is foreign soil.”

“Here (in Kashmir) we are not telling one story. We are telling our story through the pictures, the whole story, not one part of the story.”

Sometimes, that means convincing his subjects that he is simply doing his job, not pursuing one or the other political agenda. In recent years, as sections of the Indian media have grown more nationalistic, locals have become wary of cooperating with journalists. Last year, for example, when TIME went up to Srinagar to cover the violence, visiting a hospital to see the casualties involved first reassuring the relatives of the injured that we did not have any affiliation with the more nationalist Indian outlets. 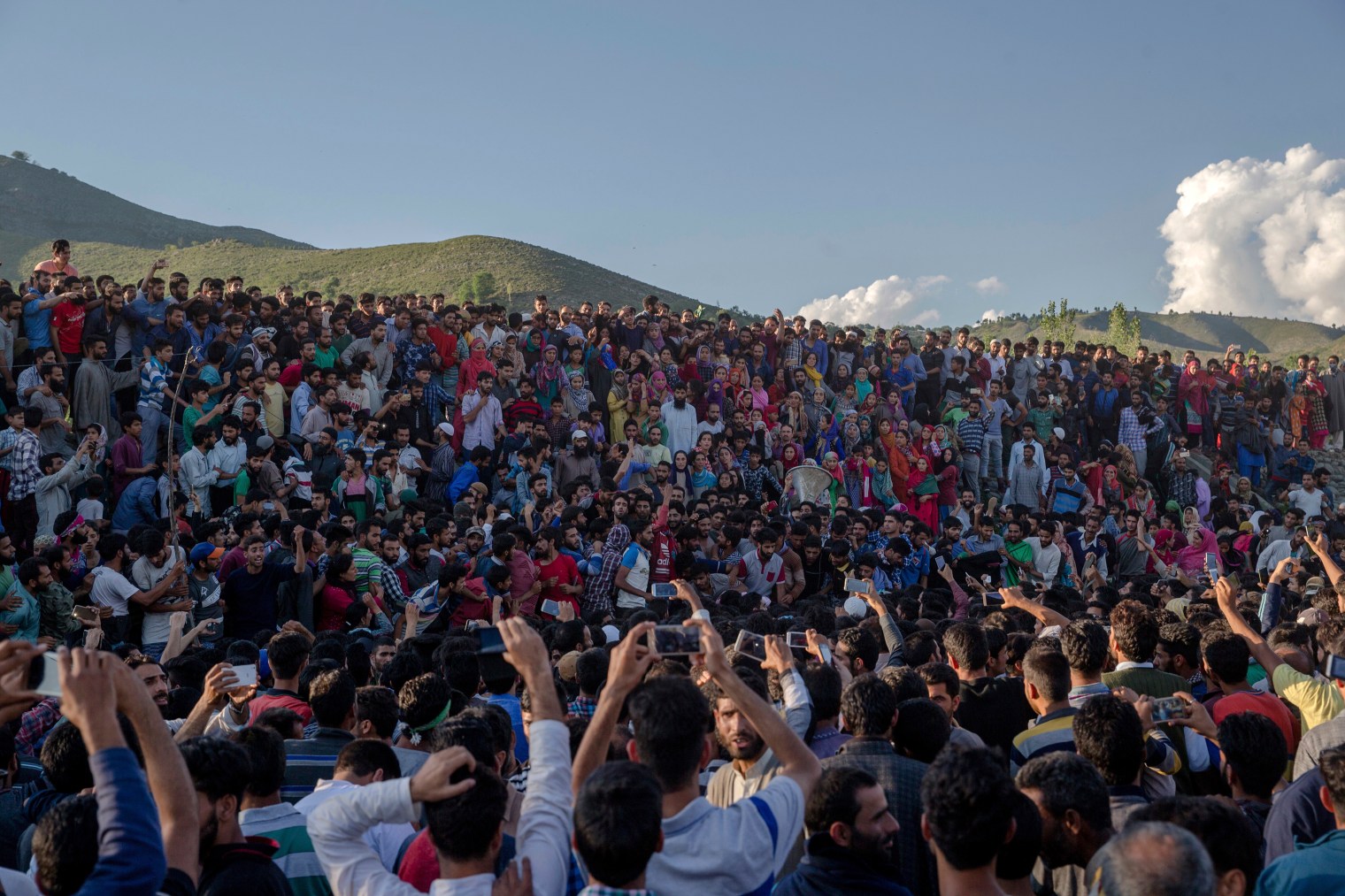 Villagers wait for the body of a local rebel commander killed in a gun battle in Souf, south of Srinagar, on July 1. Dar Yasin—AP 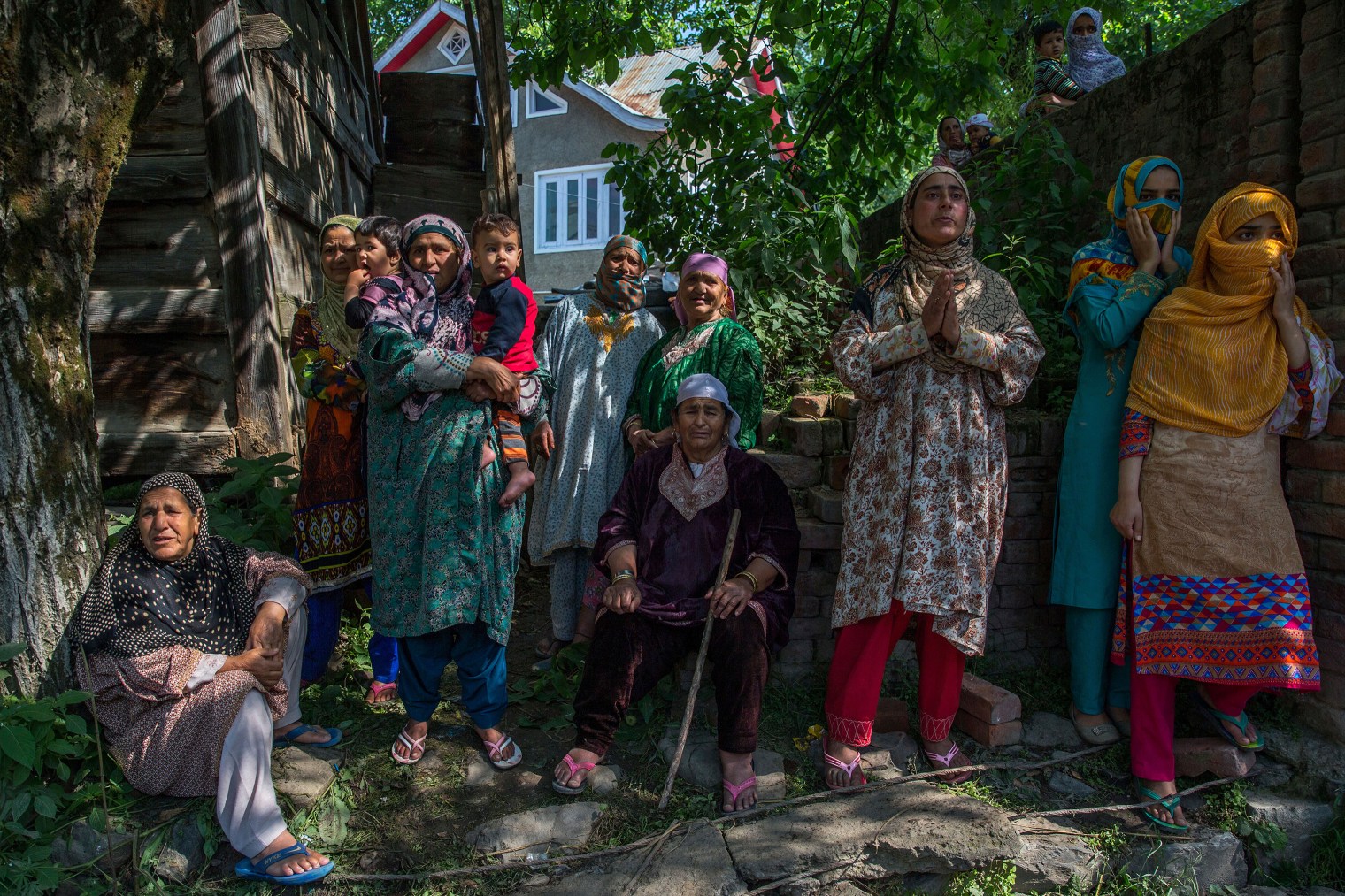 Women grieve as they watch the funeral procession of a rebel leader in Retsuna, south of Srinagar, on May 28. Dar Yasin—AP

“There is this perception on the ground with some people, that we are interested in more than just telling the story,” says Yasin, who briefly found himself in front of the lens earlier this year, when, while covering a Srinagar protest, he rushed in to help an 18 year old woman who was injured. Seeing Khusboo Jan bleeding from the head, he dropped his camera and carried her to safety, away from the protest in Srinagar.

“I always try and explain that we don’t have an agenda. We are just here to tell the story.” 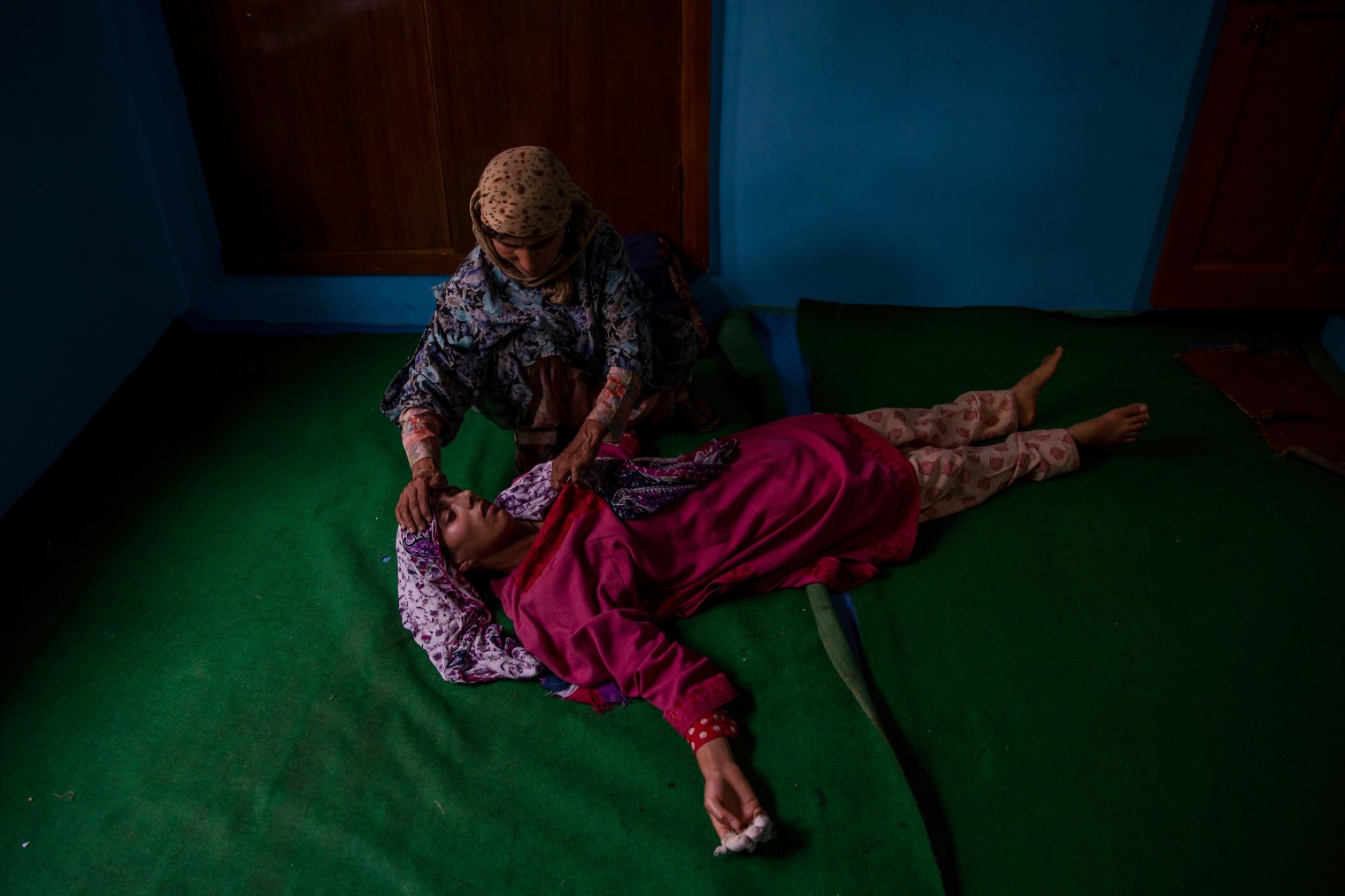 A woman tends to an unconscious relative of a Kashmiri rebel during his funeral in Hajin, north of Srinagar, on Aug. 5. Dar Yasin—AP