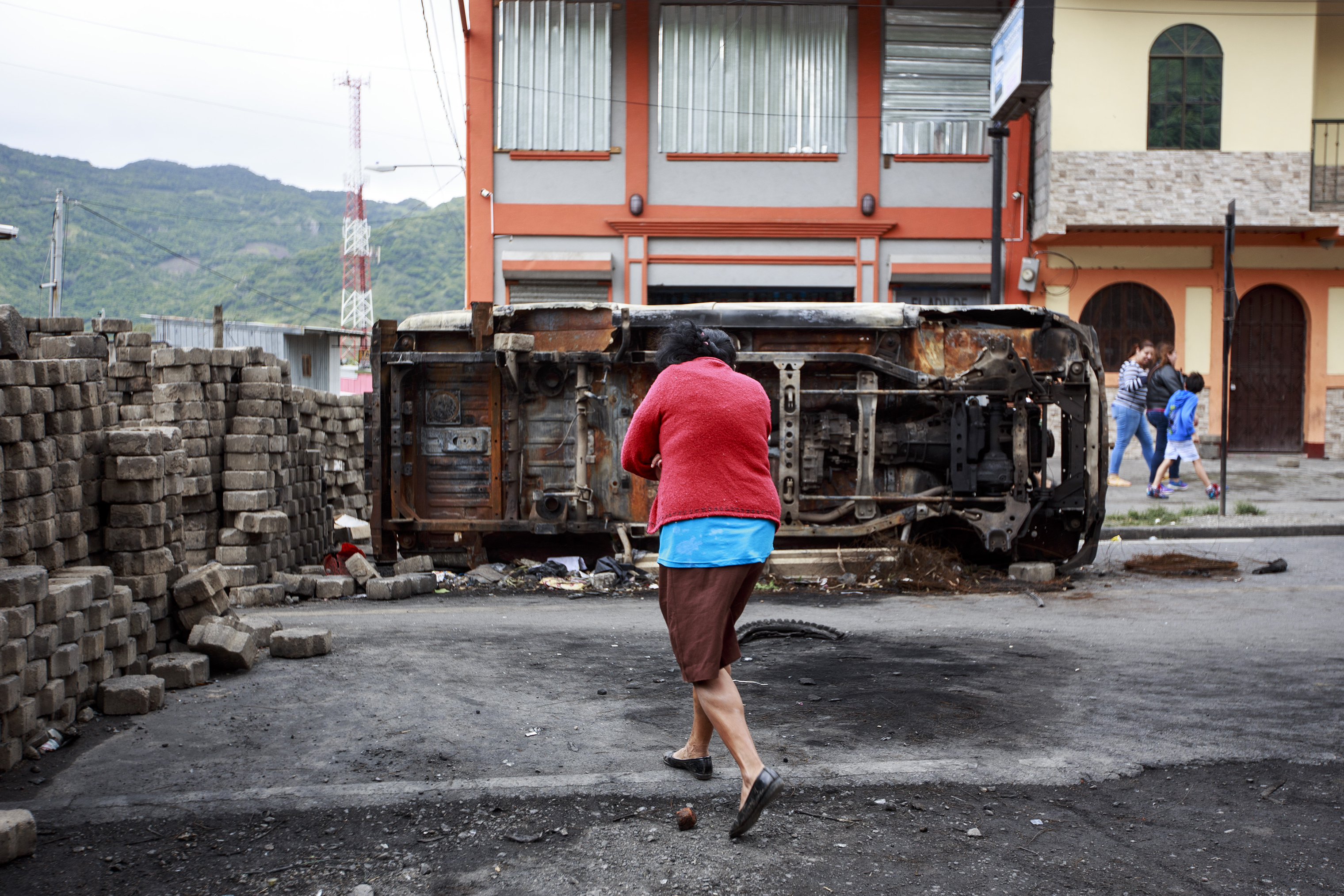 A woman walks near a barricade in Jinotega, north of Managua, Nicaragua, on June 4, 2018.
Fred Ramos—El Faro

A Hundred Days of Protest in Nicaragua

By Ciara Nugent | Photographs by Fred Ramos and Víctor Peña

July 27 marked 100 days since the outbreak of deadly clashes between protesters calling for the ouster of Nicaraguan president Daniel Ortega and pro-government forces. But as the country passed that grim milestone, there is little time to count the dead, which now number 448, according to human rights groups.

The country remains in a state of chaos, as photographs taken by Fred Ramos and Victor Peña, two photographers for the Latin American news website El Faro, show all too clearly. Barricades have transformed neighborhoods and roads and the unrest has paralyzed businesses, schools and universities. Almost 3,000 people have been injured.

A barricade near the National Autonomous University of Managua (UNAN) on July 5, 2018.
Fred Ramos—El Faro
Protesters clash with police during protests in Masaya, southeast of Managua, on June 2.
Víctor Peña—El Faro
A demonstrator waves a flag during a protest in Managua on April 29.
Fred Ramos—El Faro

President Ortega helped to lead his own uprising in 1978, as the left-wing Sandinista group ousted the long-ruling Somoza family dictatorship. Ortega, 72, ruled Nicaragua as a revolutionary hero from 1979 to 1990, but since returning to power in 2007, critics say he has become increasingly authoritarian.

The protests this year began on April 18, when pro-government paramilitary gangs violently repressed a small student-led protest in Managua against controversial pension reforms. That clash left eight with injuries, including head wounds and fractured fingers. One journalist was hospitalized.

Thousands of people participate in a Catholic Church-organized rally in Managua on April 29.
Fred Ramos—El Faro

Four days later the cuts were scrapped, but it was too late: public anger at the response had already escalated into calls for Ortega’s resignation. The president calls the protesters “right-wing delinquents” and has repeatedly insisted he will not step down.

Across the country, students have occupied universities and workers have called strikes. But the clashes haven’t stopped and the death toll keeps rising. Some 19 police officers are among the dead, according to the U.N.’s human rights’ spokesman. The majority are civilians.

The Catholic Church has attempted to play a mediating role, helping to organize conversations between student leaders, civil society groups and the government.

The government has accepted some demands, such as to allow the entry of international bodies such as the U.N. and the E.U. into Nicaragua and to disarm the paramilitary gangs, but protesters say they have not fulfilled their promises.

A Venezuelan man participating in the various anti-government protests in Managua on June 27. An AK-47 bullet hangs from his neck.
Fred Ramos—El Faro

Faith in the negotiations was severely undermined on June 17 when, hours after the first agreements were signed, a family of six were killed when their home was set on fire by police and paramilitaries, according to neighbors. The victims included an eight-month-old and a two year-old child.

On June 23, as police and paramilitary groups opened fire on the student-occupied University of Managua, a one-year-old boy, Teyler Lorío, was hit in the head by a stray bullet and died. His mother rejected government claims that protesters had caused his death, telling a local TV station, “He was killed by a police gunshot. I saw them. They were police.”

The U.N, the U.S. and 13 Latin American countries have demanded the government put a stop to the violence, with many fearing the country is on the path to becoming the next Venezuela.

On July 16, speaking from neighboring Costa Rica, U.N. Secretary General António Guterres ramped up pressure on Ortega, calling the death toll “absolutely shocking” and attributing it to “the use of force on the part of entities linked to the State.”

That same day, Nicaragua’s Congress passed an anti-terrorism law that the U.N. warned is “very vague” and could allow the government to designate “people who are simply exercising their right to protest” as terrorists. With Ortega vowing to stay in office until scheduled elections in 2021, and protesters planning to stay in the streets despite the loss of Masaya, a troubling new chapter in Nicaragua’s history may just be getting started.

The body of Teyler Lorío, more than a year old, whose parents said he died after being struck by a stray police bullet, in Managua on June 24.
Fred Ramos—El Faro

Fred Ramos and Víctor Peña are photographers based in El Salvador. Follow them on Instagram @ramos_fred and @victorpena84.