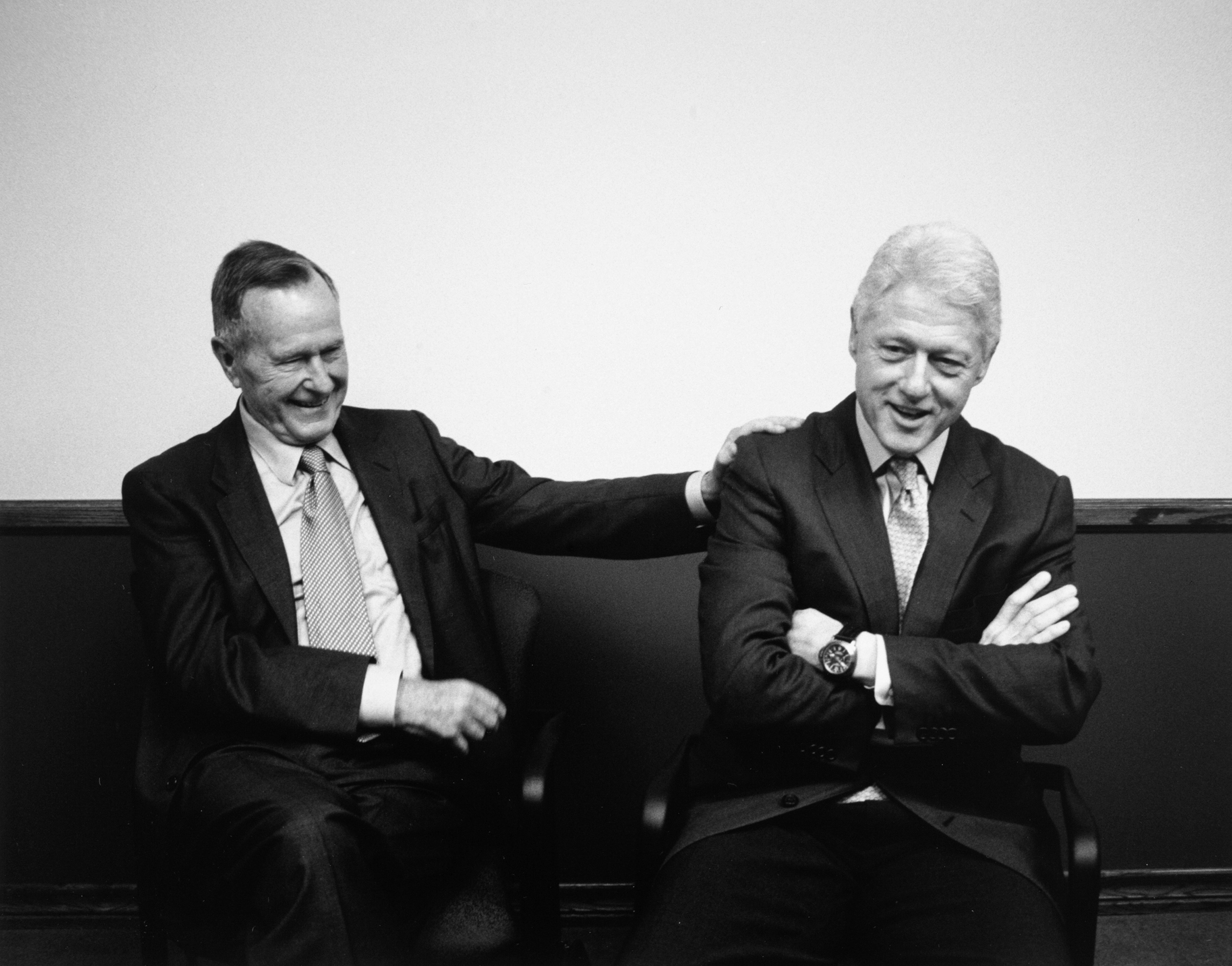 Behind the scenes with former Presidents George H.W. Bush and Bill Clinton coming together to raise money for Katrina at the University of New Orleans, 2005.
Diana Walker for TIME

The Photo That Truly Captured The Friendship of George H.W. Bush and Bill Clinton

The story behind this photo is very unusual. In 2005, President George W. Bush had asked both his father and Bill Clinton to work together on a fund for Hurricane Katrina relief in New Orleans. Clinton, of course, had beaten Bush back in 1992. They weren’t supposed to be friendly.

During that campaign, I had covered President George H.W. Bush. I honestly don’t think he had a high regard for Clinton at the time, because it was a tough loss for him. I remember his face during election night in Houston. He really thought he would be re-elected.

I went on to cover Clinton’s presidency, and I rarely saw them together over the years, except at formal ceremonies. I saw them at Richard Nixon’s funeral and at the White House for the official unveiling of Bush’s portrait. But New Orleans was the first time I ever saw them together like this—quietly, away from other people.

They were doing an interview with TIME’s Michael Duffy after announcing $90 million in hurricane-relief grants. We were in an empty room in a library at the University of New Orleans. It wasn’t an ideal place to take a picture. There was overhead neon light. It was pretty drab.

I thought, How am I going to show what kind of a relationship these two people have developed? I just didn’t have any idea. I had heard that they had become good friends over the years, and I wanted to see if it was true. I kept watching them, and all of a sudden Bush put his hand on Clinton’s shoulder. I thought, Oh my God, wow. There it is. That’s the picture. Every so often, there will be a gesture, a touch, a movement that shows you something. You’re always looking for it as a photographer. And there it was, a lightly teasing, affectionate pat on the shoulder. Friends, indeed. I thought, They really do like each other. You don’t touch someone like that unless you care about them.

They were telling funny stories. Clinton had gone to visit the Bushes in Kennebunkport, Maine. Mrs. Bush had sort of looked askance at the idea of Clinton coming. But she ended up so fond of him, she was asking him to come again. They joked about the speedboat. They talked about playing golf. They appreciated each other, and it was just a joy to see.

Diana Walker was TIME’s White House photographer from 1984 to 2001; her most recent book is Hillary: The Photographs of Diana Walker.