The Story Behind the 'Texts From Hillary' Viral Photo

As one of TIME’s White House photographers for nearly two decades, Diana Walker says her primary goal with politicians was to “show you how human they were.” This was never clearer than during her time with Hillary Clinton, whom Walker captured throughout her historic transformation from First Lady to U.S. Senator to Secretary of State.

True to her aim, Walker’s pictures help convey the person behind the politician. Whether on the trail in New York or on a military plane, her images offer a rare window into a person familiar to most, yet known to few. “I was just shooting I saw,” Walker says. “And that’s who I saw.”

One of Walker’s images even went viral. As the photographer was with the Secretary on a plane bound for Libya, Clinton put on her sunglasses and grabbed her phone. The image became the meme “Texts from Hillary.” In this video, Walker recounts how she captured the now-iconic frame.

Diana Walker is a regular contributor to TIME and worked as TIME’s White House photographer for nearly two decades. You can see more work in her latest book Hillary 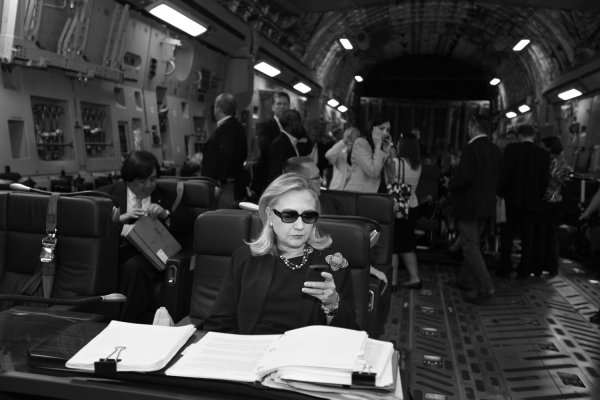 An Intimate Portrait of Hillary Clinton in Photographs
Next Up: Editor's Pick