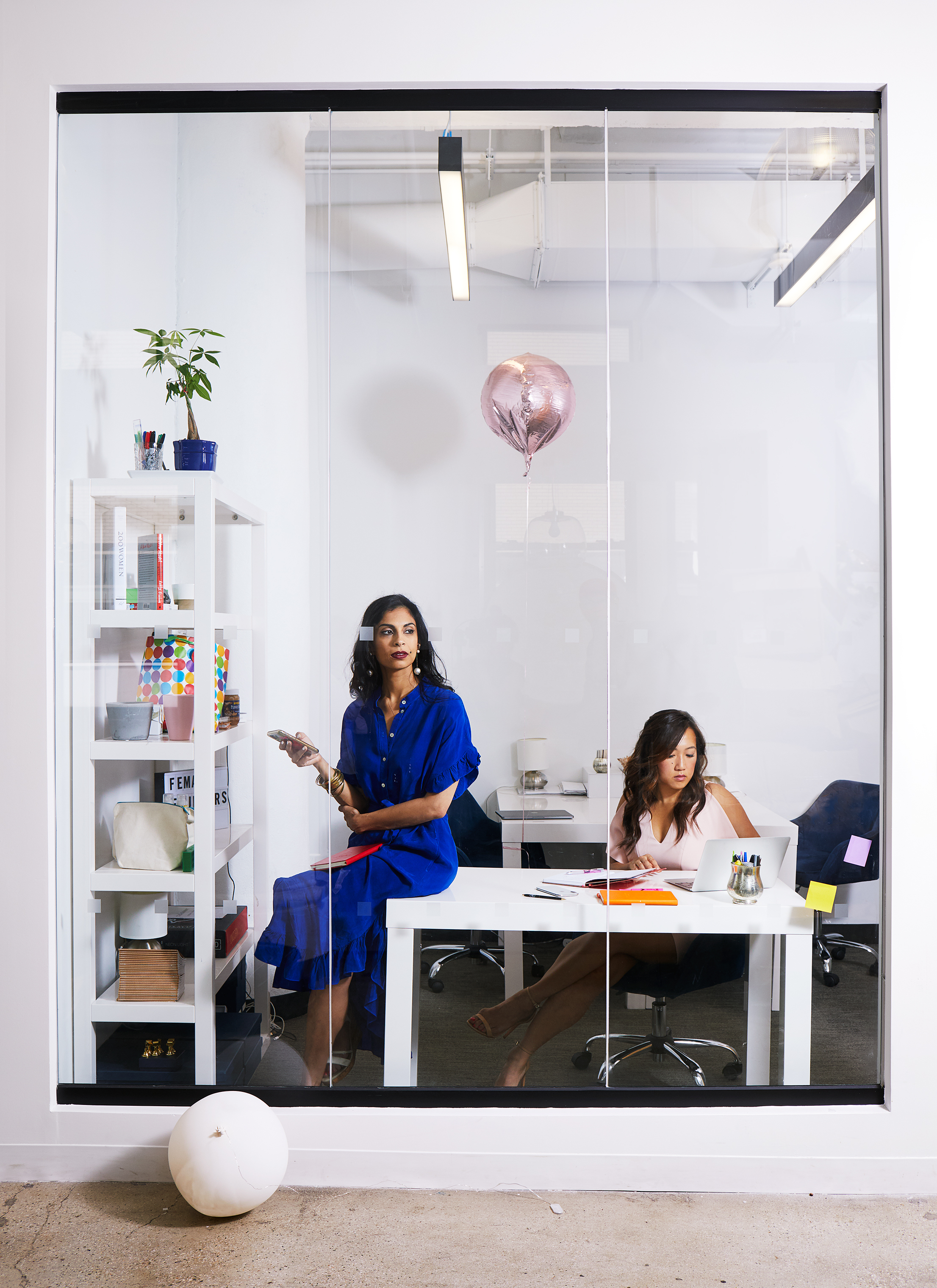 Anu Duggal and Sutian Dong, partners behind the Female Founders Fund, in their office in a hip co-working space in New York City.
Kyoko Hamada for TIME

‘Thank God You Exist.’ These Female VCs Have $27 Million to Invest in Women’s Ideas

Anu Duggal and Sutian Dong’s tiny co-working office is stacked high with 100 swanky gift bags. Every item stuffed inside the black and cream weekend duffles is trendy and coveted by the New York Millennial set — S’well water bottles, Sustain Natural organic tampons, Google Home minis. One product has extra appeal to Duggal and Dong: the newest lip balm from Instagrammable beauty brand Winky Lux, the creation of which was made possible by the women loading the loot into each bag.

They are the partners of the Female Founders Fund, a venture capital firm dedicated to funding new tech-related companies created by women. And on one late-July morning, they were preparing for their August CEO Summit, a day-long event that would bring newly minted chief executives into conversations with established leaders like Marissa Mayer, Cecile Richards and Danny Meyer. It’s just one of 40-50 events Duggal and Dong host for the founders in their portfolio each year. They run an ambitious calendar of gatherings to help advance the businesses they’ve had a hand in launching — everything from off-the-record press dinners and breakfasts with uber-successful CEOs to office hours at Instagram.

Duggal, an entrepreneur herself, launched the fund solo in 2014, bringing on experienced investor Dong as a partner in 2016. Their mission to support women entrepreneurs comes in part from a place of wanting to see women succeed — but it also makes good business sense. Studies have shown that diversity only helps the bottom line; McKinsey & Company found in 2015 that businesses in the top quartiles for racial and ethic diversity and gender diversity are 35% and 15% more likely to outperform their competitors.

Duggal founded F3 in 2014, bringing on Dong as her partner in 2016. Together, they announced a new $27 million fund in May, with investors including Melinda Gates.
Kyoko Hamada for TIME

“When you think about the face of entrepreneurship 10 to 20 years ago, it looked very different than what it does today,” says Dong. For investors who look for patterns in past successes to recreate, female founders rarely fit the model, she says, but that’s where she and Duggal see profit potential. The biggest challenge has been convincing others that female founders will make big returns, Duggal says, but she and Dong have taken massive strides toward overcoming it: F3 announced in May that it has raised an impressive $27 million from investors like Melinda Gates, Stitch Fix CEO Katrina Lake and Girls Who Code founder Reshma Saujani. “We’re paving the way and opening up the path for so many other female investors to take that leap,” Dong says.

The roadblocks facing women in the startup world are not limited to access to funding. When Susan Fowler published a blog post in February 2017 about the discrimination she faced as an engineer at Uber, she blew open a national conversation about sexism in tech. A year and a half later, Dong nods to Fowler’s impact. “The generation right now is really committed to changing permanently how people interact and how people treat each other,” she says. F3 is part of the movement to reimagine an industry that offered only 2% of venture capital dollars to women entrepreneurs last year. “We’re talking about looking forward and building something new that we want to see, versus existing in a system and a construct that’s designed for people that don’t look like us,” she says.

Duggal was born in India; Dong in China. Dong says she’s seen fellow women of color in her industry struggle with moments of internal doubt following rejection: “Is that because of what I look like, or did that happen because of how they were feeling?” she describes people wondering. “That unknown piece is hard.” The women who come to Dong and Duggal with business ideas often enter with a sense of relief, as if to say, Thank God you exist, Duggal says. “We’re saying to the world that you can have a fund that’s 100% female founders and compete with everybody else in the market.”

Dong and Duggal visit Natalie Mackey, CEO of beauty brand and F3 portfolio company Winky Lux at her New York City office. “The brand that she’s built [speaks] to this very particular Millennial audience, and [is] very successful in understanding how to reach them,” Duggal says.
Kyoko Hamada for TIME

After a morning of meetings and CEO Summit prep, Duggal and Dong journey 20 blocks east to the Winky Lux offices on the Lower East Side for a mentor session with CEO Natalie Mackey.

The Winky Lux storefront, spotted with products including a signature flower lip balm, is a shiny little pink oasis. Customers can test out makeup and pose in front of an Instagram-friendly floral backdrop under the neon-lit words, You’re like really pretty. (If you don’t get the reference, Winky Lux is probably not for you.) Duggal and Dong zip past the cutesy setup into the office — a room full of glitter-eyed young staffers tapping away at computers half buried under products. Mackey greets them in the back, her sleepy French bulldog Pippy at her side.

The three women settle at a white conference table and catch up on the next big thing for Winky Lux: a museum-inspired pop-up shop designed to stand out on social media. Mackey is planning a disco room, a whipped cream room, a cashmere room and a lemon-themed ball pit, all tied to her products. “How are you going to move the in-store customers to online?” Dong asks. Mackey and her team are engineering ways to capture customer data through the store and creating opportunities to make GIFs that visitors will share online. “What’s keeping you up at night?” Duggal asks. Mackey is struggling to hire people who can guide customers through the experience with passion for the brand. Duggal suggests hiring actors, as another of F3’s portfolio companies is doing for a kids’ programming business, because they’re comfortable in front of an audience and skilled at taking on new roles. “That’s awesome,” Mackey says. “Good advice.”

Mackey’s French bulldog Pippy works by her side.
Kyoko Hamada for TIME

“There’s a unique set of challenges that a female founder has, so it’s important to have this network,” Mackey says later, after Duggal and Dong have left to head back to the office. When she started pitching her company, which uses a proprietary manufacturing process to create new products and capitalize on trends at a rapid pace, tons of venture capital firms said no. “I got questions like, ‘Why aren’t you selling to men? You’re cutting out half of the market,’ and, ‘Well, I gave this to my wife and she only uses Goop products, so she doesn’t think that this would sell,’” Mackey says. She was introduced to Duggal and Dong through another woman they invest in, Mariah Chase from fashion brand Eloquii. “It doesn’t surprise me that the first group to write a substantial check was a group that focused on female-led businesses.”

For the first F3 fund, Duggal offered the founders she invested in the chance to own a piece of the fund. For the second fund, she and Dong invited their portfolio founders to write a small check and become limited partners, in order to gain experience as investors. “From day one, it’s been all about the network,” Duggal says.

Mackey would love to join the investing process someday. “It’s interesting being a female founder — it’s definitely the best time yet,” she says. “But it’s not as good as it’s going to be.”