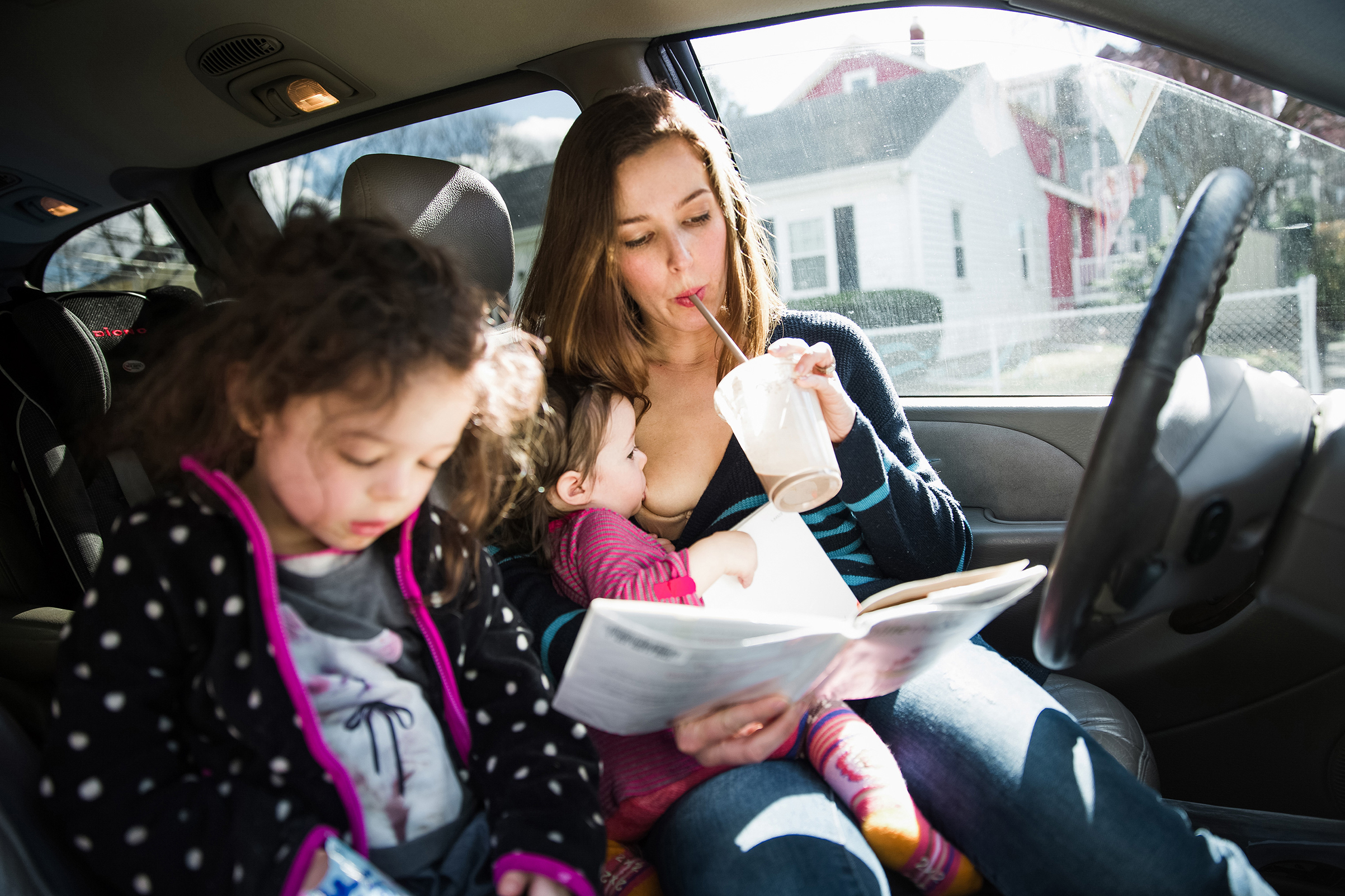 Monica, with Marlin (lap, center) & Simona (left), "As I sit here multi tasking, emailing and breastfeeding at afternoon pick up in the parking lot with the older sister occupied in the back and Marlin happily suckling in my lap, I realize that breastfeeding isn't always "beautiful"in the aesthetic sense. What I love about it is the raw immediacy. A procrastinator and unplanner by nature, breastfeeding fits my lifestyle perfectly. Nothing to remember, nothing to clean, just my ladies and my baby."
Gina Marie Brocker

How One Mother Fights the Stigma Against Breastfeeding with Her Photography

Before she was pregnant, photographer Gina Brocker never really thought about breastfeeding. It wasn’t until the birth of her first child that she became intimately aware of how life-altering breastfeeding becomes, for both good and frustrating reasons. “It became such a big part of my life, and I wanted to start exploring that through photography,” says Brocker, who has a three-year-old son and a daughter who is five months. “I felt like I was thrown into the deep end, and other women felt similarly.”

For two-and-a-half years, Brocker has photographed women breastfeeding — at home, at work, in the car, in the bathroom, everywhere. The goal of the project is to both empower women and normalize the practice. Her photographs are incredibly intimate, and many women told Brocker they agreed to participate in order to share their experience, including the challenges, and to help other women feel more confident about breastfeeding in public.

Melissa, with Augustis: "My favorite part of breastfeeding our son is the look of complete calm on his face. Watching the stress melt away as he nurses makes me feel like 'we got this'."
Gina Marie Brocker

The value of breastfeeding is well-established, but whether pregnant women receive the support they need to do so is another story. It wasn’t until 2010 that a national law was passed requiring employers to offer workers a location and protected time off to pump breast milk during the workday. There’s also the ongoing debate over whether official mandates to breastfeed interfere with women’s agency when it comes to feeding their child. Currently, a little over half of American women are still breastfeeding at six months.

Photographing a variety of circumstances women face when it comes to breastfeeding, including working women, was an important part of Brocker’s project. “I hope when people see this series, if they are breastfeeding, they feel they’re not alone and empowered to do what they want,” she says. “If people are not breastfeeding, or it’s not a part of their world, I would love them to see it as a beautiful and natural part of life.” — Alexandra Sifferlin

P, with E [names withheld at the subject's request]: “Before I had my daughter, I had three miscarriages. I felt broken... It is wild how differently I look at my body now. The lack of trust I had in it years ago has been transformed. I now can’t help but view my body as a powerful life source.“
Gina Marie Brocker
Robin: "I pump because I am a working mother and I want to feed my baby with the most organic nutrients... I am on a strict schedule to pump at certain times to ensure I produce just enough milk to leave for my son while I am away from him. Its a lot of work, and while nobody said motherhood would be a cakewalk, pumping really is tough! Some days, I feel like a cow hooked up to my milking machine — my nipples are sore, they bleed and are cracked."
Gina Marie Brocker
Kelly, with Natalie: "While pregnant, I had these idyllic visions of working from home with my baby: nursing her comfortably in a rocking chair, taking conference calls at my desk while she napped... Then she was born, and reality hit! My daughter always seems to wake up and needs to nurse right in the middle of a meeting. My quiet workspace was moved to the middle of the living room, our version of ground control, with toys thrown everywhere and me cradling her in one arm while I check emails. It isn't pretty; it isn't perfect, but we make it work."
Gina Marie Brocker
Danielle, with Thea: "Nursing has, impossibly, gifted us more time... I wish her little body would fit, soft and heavy, in my arms for always. Still, in the shade of her deepest sleeps, I can see her rosy mouth, eyes closed and head bobbing, as she anxiously searches for my breast. And time feels, for just a moment, a little more manageable."
Gina Marie Brocker
Brittney, with children: "Four years ago, I struggled to nurse my preemie twins, and breastfeeding was stressful, painful and only partially successful. My third baby was born full-term, and nursing has been blissfully easy this time around. Having such different experiences has given me a lot of perspective. I have so much empathy for moms who have difficulty breastfeeding and I don't take nursing for granted because I know it's not always as effortless as it looks. I give thanks every time I feed him, and I'm savoring every moment of nursing my last baby!"
Gina Marie Brocker
Talisa, with Mackenzie (center) and Max (left): "Before I had children, I thought that breastfeeding was gross. I didn't know anyone who breastfed until I was well into my 30s. I thought that only poor people or people trying to make a statement nursed their babies. I can't believe how wrong I was. I wish that I could take back all of the harsh words and ignorant glares."
Gina Marie Brocker
Taryn, with Lavi: "Bed-sharing just seemed natural to my husband and I. It allows for us to get sleep and my son to nurse as he needs throughout the night. After working in Haiti with breastfeeding mothers and being educated as a lactation consultant, I envisioned my personal breastfeeding journey to be easy. It was quite the opposite! My son had a serious tongue-tie, causing severe nipple pain that took a couple weeks to diagnose and even longer to treat. With serious determination and perseverance, we made it to six months of exclusive breastfeeding and continue as we recently introduced solids."
Gina Marie Brocker
More Must-Reads From TIME