Max Yasgur Rented Out His Farm for Woodstock. His Neighbors Sued Him

He may not have been as hip as Jimi Hendrix, but Max Yasgur played as important a role in the original Woodstock, which took place 50 years ago, beginning Aug. 15, 1969.

Woodstock’s organizers were four men in their 20s — Artie Kornfeld, Michael Lang, John Roberts and Joel Rosenman — who had originally had the idea to hold a music festival at Howard Mills Industrial Park in Wallkill, N.Y., about 30 miles from the town of Woodstock. But only about a month before the festival was to occur, the town succeeded in banning the event. Having been rejected by other potential venues, they were running out of options.

But, during their rush to find a replacement venue, event organizers were contacted by a resident of nearby Bethel, who thought the town could offer an option. The ensuing focus on Bethel led to a meeting with a local real estate agent, who drove one of the organizers to see a dairy farm there. The man who owned the farm: Max Yasgur.

Yasgur, who was then approaching age 50, agreed to lease some of his land to festival organizers.

His reasons were both monetary and idealistic. He was paid a reported $75,000 for the use of 600 acres of his land, though reports on the exact sum differ. However, he was also something of an iconoclast — a pro-Vietnam War political conservative who firmly believed in the right of free expression (even if the expression came from people whose lifestyles and beliefs were very different to his own). He once remarked to the New York Times that, “If the generation gap is to be closed, we older people have to do more than we have done.”

The farmer’s decision to accommodate a vast gathering of hippies was less than popular in his community. Some gave him the cold shoulder, while others threatened him with arson, boycott of his dairy products, and physical attack. Though not everyone in Yasgur’s town was anti-Woodstock, there were many who had no interest in closing any “generation gap.” Some residents began displaying signs that said, “Don’t buy Yasgur’s milk. He loves the hippies.” The threat of boycott would actually harden Yasgur’s resolve. His wife, Miriam Yasgur, recalled how, after her husband saw this sign, she “knew darned well he was going to let them have their festival.”

Disapproval of the festival did not prevent some neighbors from trying to capitalize on it; once Woodstock was underway, they began selling water to the thirsty masses. Yasgur was incensed that people would turn something as fundamental as water into a money-making enterprise. On the side of his barn that faced the road, he put up a large sign to inform everyone that he had “Free Water.”

Appearing on stage during Woodstock’s second day, Yasgur received a hearty response when he addressed the crowd—which was much larger than he had expected. The same could be said for his neighbors, who had dreaded the idea of some 50,000 concertgoers rocking out in their backyard. Instead, nearly half a million attended. And this festival, which had struggled to find a host, would prove the defining counterculture event of the 1960s, with Yasgur himself enshrined in songs like Joni Mitchell’s 1970 “Woodstock.”

Many in the community continued to hold a grudge against Yasgur after the festival, and although nobody followed through on the violent threats, he remained persona non grata at the local general store.

For alleged damages caused by the festival attendees, some neighbors sought legal restitution. The owners of the adjacent farm sued Yasgur for $35,000, charging that large numbers of concertgoers used their property as a site of shelter and defecation and left their property strewn with refuse.

Indeed, the festival had been largely lacking in sanitary facilities. This deficiency, combined with heavy rains and a spirit of chaos, had filled the “generation gap” with a rancid mess. Yasgur’s own farm incurred significant Woodstock-related damage, for which he ultimately received a $50,000 settlement from its organizers.

The festival organizers faced a string of lawsuits and had to spend hundreds of thousands of dollars on cleanup, according to Joel Makower’s book Woodstock: The Oral History, which notes that the organizers also reached a settlement with an indignant local farmer who claimed his cows refused to give milk during the festival’s commotion. But, though Woodstock’s organizers contended with plenty of legal issues, Yasgur was the one who had to face the resentment of townspeople with whom he had previously been on good terms. Eventually, some in the community decided to hold a dinner event in his honor, just to show him that not everyone had turned on him.

All the negative sentiment had taken an emotional toll, however. John Anthony Moretta’s book The Hippies: A 1960s History relates how, until the end of his life, Yasgur avoided discussion about the treatment he had received from anti-Woodstock neighbors.

Despite the hassle and acrimony, Yasgur later said he did not regret his decision to host Woodstock. However, when talk surfaced about repeating the festival in 1970, Yasgur showed scant interest in playing host once again. “As far as I know, I’m going back to running a dairy farm.”

But Yasgur, who had already suffered a series of heart attacks before Woodstock, would not continue at his occupation for long. He sold his farm in 1971 and relocated to Florida, where he died of a heart attack in 1973. Rolling Stone then paid tribute to him with a full-page obituary — a rare gesture for a non-musician.

Indeed, Yasgur was neither a guitar god nor a charismatic front man. He was a farmer – but one with enough land and maverick moxie to let a young generation define itself. 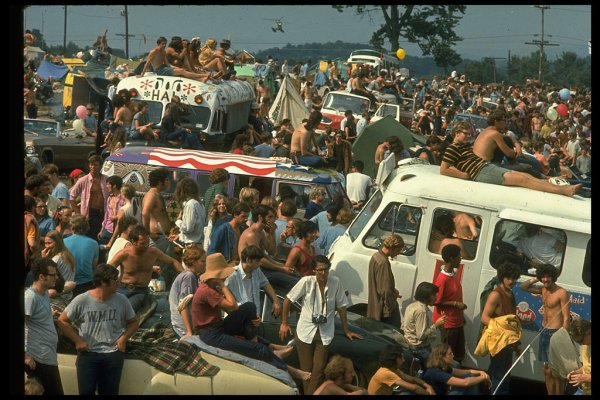 Woodstock Didn't Actually Take Place in the Town of Woodstock. Here's Why
Next Up: Editor's Pick