Honeybee Deaths Are Down, But the Beepocalypse Continues

Honeybees at the bee hives at Hudson Gardens in Littleton, Colo. on June 6, 2013.
Seth McConnell—Denver Post/Getty Images
By Bryan Walsh

How bad are things for the honeybee? Almost a quarter of U.S. honeybee colonies died over the past winter, according to new numbers released this morning—and that represents an improvement. The Bee Informed Partnership—a network of academics and beekeepers—along with the Apiary Inspectors of America and the U.S. Department of Agriculture surveyed 7,183 beekeepers from around the country over the past year. Those beekeepers are responsible for about a fifth of the managed colonies in the U.S., and after a year in which nearly a third of honeybee colonies died, this past winter was a reprieve of sorts. The loss rate of 23.2% was significantly lower than the 29.6% average loss beekeepers have been experiencing since the partnership began the annual survey in 2006.

(COVER STORY: The Plight of the Honeybee)

Yet even if honeybees had it comparatively easy this past winter, the numbers were still much worse than the 10-15% loss rate that beekeepers used to think of as normal—before honeybee colonies started dying off or simply disappearing thanks to colony collapse disorder, which began occurring with troubling frequency around the middle of the last decade. And there’s also the strange fact that 20% of honeybee colonies died during the spring and summer period last year, even though bees usually thrive in the warm weather. There’s no explanation for that anomaly—the survey began tracking summer losses only this year—which has researchers puzzled. “The combination of winter and summer losses was around 30%,” says Dennis vanEngelsdorp, an entomologist at the University of Maryland and one of the leaders of the bee partnership survey. “That is still troubling.”

Just as troubling: we still don’t know exactly why the honeybee has been struggling in recent years. Actually, it’s not just the honeybee—native wild bees have been dying off in even larger numbers. It’s gotten so bad that yesterday the Xerces Society and the Natural Resources Defense Council sued the U.S. government to list one wild bee species—the rusty patched bumble bee, which is now gone from 87% of its native habitat—as endangered. Bees of all sorts provide invaluable service to farmers; the honeybee alone adds $15 billion in value to crops each year by pollinating everything from apples to zucchini. But as I wrote in a cover story for TIME last year, it’s as if there’s something about the world today—the world human beings have made—that has become toxic to one of our oldest domesticated species. “Too many bees are dying,” says Lisa Archer, the food and technology program director at the non-profit Friends of the Earth. “This is not sustainable over the long term.”

(MORE: The Mystery of Animal Grief)

Many experts put much of the blame down to infestations of the Varroa destructor mite. Varroa are microscopic vampire bugs that burrow into the brood cells and attach themselves to baby bees, sucking out the bees’ hemolymph—their blood—with a sharp, two-pronged tongue. The varroa directly weaken the bees they infest, but the bugs can also introduce bacteria and other viruses, which in turn makes the bees that much more vulnerable to any other kind of shock. Varroa infested hives often need to be replaced every one to two years, while clean hives survive for as many as five years. Back in 1987, when varroa first arrived in the U.S., beekeepers managed more than 3 million colonies. Now they’re struggling to maintain about 2.5 million, and the bad economics are driving some beekeepers away from the profession altogether, partly because the struggle seems like such a losing one. The chemical miticides that beekeepers use on the varroa can be dangerous to their own bees—and then it’s only a matter of time before the mites adapt, and the miticide becomes useless. “Varroa destructor is a modern honeybee plague,” said Jeff Pettis, the bee research leader at the U.S. Department of Agriculture, at a Congressional hearing on pollinator loss last month. “What beekeepers truly need are long-term solutions to varroa mites.”

The USDA and other groups are working on some of those solutions, including efforts to breed honeybees that are naturally resistant to varroa. But the mites can’t take all the blame. Honeybees are starving as open land—which has the sorts of flowers and plants that serve as a buffet for bees—is filled up with monocultures of corn and soybeans that offer little nutrition. A number of other diseases are afflicting honeybees, including the tobacco ringspot virus, a plant disease that was implicated by researchers earlier this year. What’s more, commercial honeybee colonies may be trucked thousands of miles for work, including the massive and lucrative spring almond pollination in California, which requires billions of bees. The stress of travel can’t be easy on them.

Then there are what are known as neonicotinoid pesticides, which are injected directly into the seed of a future plant. That means traces of the insecticide may always be part of the plant tissue—not at all the case when pesticides are sprayed on crops and can disspiate. A growing but still controversial body of research has implicated neonicotinoid in the death of honeybees, leading the European Union to ban three classes of the pesticides over concern about their impact on bees and other pollinators. Several members of Congress have put forward a bill that would extend that ban to the U.S. A study released last week by researchers at the Harvard School of Public Health claimed to find a link between neonicotinoid exposure and low survival rates during cold winters. There’s particular concern that neonicotinoids might have sub-lethal effects on bees—not killing them, but causing enough damage to make them vulnerable to an assortment of other ills. But don’t expect a ban on neonicotinoids any time soon—an EPA review of the pesticides won’t conclude until 2018.

The chemical companies that make neonicotinoids are, unsurprisingly, skeptical that their products are behind the plight of the honeybee. “Extensive research has shown that these products do not represent a long-term threat to bee colonies,” David Fischer, the director of pollinator safety at Bayer, said in recent Congressional testimony. But the very purpose of pesticides is to kill insects, and no one would deny that such chemicals are almost certainly one of many factors hurting honeybees today. (It’s notable that a recent study found that the diversity of pollinators like bees was 50% higher on organic farms than on conventional farms.) Many independent experts, however, doubt that neonicotinoids should get all the blame. Australia still uses neonicotinoid pesticides, but honeybee populations there are not in decline—something that may be due to the fact that varroa have yet to infest the country’s hives. The recent neonicotinoid study from Harvard has been criticized for feeding honeybees levels of neonicotinoids they never would have experienced in the wild. “[The study] just confuses the issues,” says vanEngelsdorp. “It doesn’t have any bearing on what’s going on.”

Despite the ruinously high levels of losses of recent years, beekeepers have managed to keep the number of colonies in the U.S. stable—and they’ve managed to keep meeting the pollination needs of farmers. Be glad they have; honeybees are responsible for one out of every three mouthfuls of food you’ll have today. But it’s expensive and dispiriting to keep replacing dead honeybees year after year, as researchers scramble to figure out just what’s killing them. Improving trends notwithstanding, we lost a quarter of our honeybee colonies over the winter—and that shouldn’t be good news. 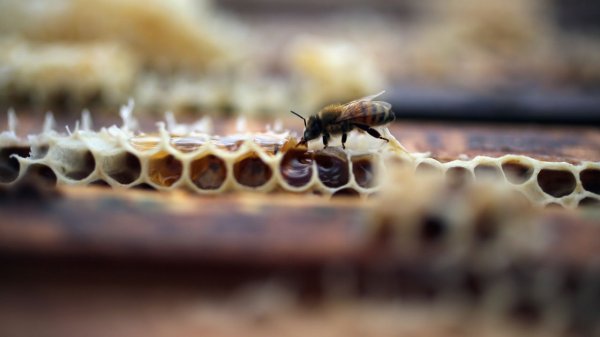 Pesticides May Cause Colony Collapse Disorder in Honeybees
Next Up: Editor's Pick