80% of Meat Labels Could Be Meaningless, Exclusive Report Says

A new report finds that the government was unable to provide proof that many meat and poultry producers are living up to many of their feel-good labeling claims.

The advocacy group Animal Welfare Institute spent three years requesting documentation from the USDA about companies that boast their animals are well cared for or raised in accordance with high environmental standards. The USDA failed to supply documentation supporting these sorts of claims—which range from “Humanely Raised and Handled” to “Sustainably Farmed”—for 20 of the 25 products AWI investigated.

The findings suggest that whether or not the animals in question are actually being raised humanely or in an eco-friendly manner, there are big gaps in verifying those claims and giving consumers access to that information. “We’re not suggesting that all these claims are misleading or that the claims we reviewed were misused,” says Dena Jones, manager of AWI’s Farm Animal Program. “But that’s the problem—we don’t know,” she notes. “That doesn’t give any assurance to the consumer.”

In the five cases in which AWI did receive relevant documents about labeling claims, the evidence, in Jones’s opinion, was inadequate, often consisting of a one- or two-sentence statement by the company that the animals were being raised appropriately—and no additional information about animal cage size, feed or water quality.

These claims are considered added value, Jones says, and people pay top dollar because of them. For example, the online grocery service FreshDirect sells its own brand of boneless, skinless chicken breast cutlets—raised without antibiotics—for $6.99 per pound, whereas they sell a humanely raised and organic competitor’s cutlets for $11.99 per pound. And if the explosion of the organic market is any indication, these claims could be poised to bring in even more sales; in 2013, organic foods soared in size, to approximately $35 billion. “To most people, these claims mean you are getting something above the standard of conventional industry.” And with such prices at stake, companies should have to prove it, she says.

Indeed, these labels have become a major selling point with consumers. “The larger conventional meat companies, they see the success that our sector has had,” says Christopher Ely, co-founder and farmer liaison for Applegate, which makes meat and dairy products, many of which are certified organic. And they want a piece of the warm-and-fuzzy meat pie. “Everybody is jumping in.”

Many companies do pay an outside organization, such as Certified Humane or Global Animal Partnership, to supply guidelines and perform audits to make sure their practices are in line with the statements on their labels. (The third-party labels that AWI cites as trustworthy are Animal Welfare Approved, American Humane Certified, Certified Humane, Food Alliance, USDA Certified Organic and GAP, which verifies products sold at Whole Foods Markets.) But other companies may feel empowered to make exaggerated—or very vague—claims, Jones notes, and the various certification groups have distinct standards for what many of these terms require.

“There aren’t scientifically established and consumer-agreed-upon definitions for ‘humanely raised’ or ‘sustainably raised’,” says Lindy Miller, an agricultural extension educator at Perdue University. “So it becomes very hard to write or enforce regulations.” This leaves the marketplace in moderate chaos—as it was a couple decades ago for the term “organic” before the USDA took over a centralized labeling program. Simply arriving at a unified definition of organic took years and resulted in hundreds of pages of regulatory documents. Terms such as “humane” and “sustainable” are far murkier, and open to interpretation. “It’s not like ‘cage-free’ or ‘free-range,'” which have relatively specific, self-explanatory implications, says Jones.

Applegate was one of the 20 companies for which the USDA failed to supply any documentation supporting a “humanely raised” label. Jones points out that the company had previously verified that claim through Certified Humane but no longer does. Ely explains that Applegate now allows its individual producers to select their certification process but assures that each of its producers does get verified for humane handling. (He also asserts that they file thorough documentation with the USDA each time they apply for a new product label to be approved.)

Ensuring accountability for how an animal was raised becomes even more complicated because the company requesting USDA label approval is rarely the same one that has actually raised the animal. Most major distributors buy their animals from suppliers all over the country. Applegate, for example, might acquire animals from 1,500 different individual farms this year alone, Ely notes. And the USDA, which is tasked mainly with ensuring that food is safe and unadulterated, “does not have authority to regulate animal-raising facilities,” says Catherine Cochran, a USDA spokesperson, adding that they do “require processors to substantiate that they meet the claims presented on their product labels.”

And just because the USDA was not able to supply AWI with documentation does not mean that it does not exist. As Miller notes, when proprietary information—such as a company’s list of suppliers or their animal feed blend—does not generate a human safety concern, the USDA will respect the company’s trade secrets and not release the documents to the public. This policy, he notes, could be adding to the confusion and lack of transparency about how these claims are being verified.

Nevertheless, AWI plans to submit a petition Wednesday to request that the USDA require third-party certification for all labeling claims about sustainability and animal welfare.

“In the end,” says Ely, “it’s going to be about the trust of the label and the company.” 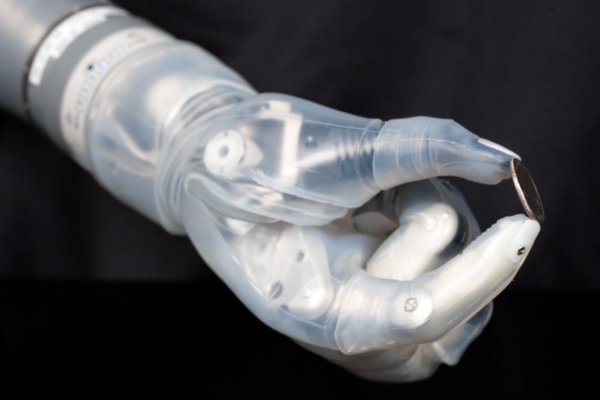 See the Bionic 'Luke' Arm In Action
Next Up: Editor's Pick