When you come home to a purr or wagging tail at the end of a stressful day, the sudden wave of calm you feel isn’t just your imagination. Research suggests that your fluffy friend truly is good for your physical and mental health. “Pets often provide unconditional acceptance and love and they’re always there for you,” says Gary A. Christenson, MD, chief medical officer at Boynton Health Service at the University of Minnesota. “There is a bond and companionship that makes a big difference in mental health,” not to mention the extra exercise you get from walks and playtime. Read on to learn the surprising ways your pet can boost your health.

Pets may lower your cholesterol

If you have a dog, those daily walks are helping to keep your cholesterol in check, says Rebecca A. Johnson, PhD, director of the Research Center for Human-Animal Interaction at the University of Missouri College of Veterinary Medicine. Plus, a survey by the Australian National Heart Foundation revealed that people who own pets, especially men, tend to have lower cholesterol and triglyceride levels.

Simply being in the same room as your pet can have a calming effect. “A powerful neurochemical, oxytocin, is released when we look at our companion animal, which brings feelings of joy,” says Johnson. “It’s also accompanied by a decrease in cortisol, a stress hormone.” Through her research with veterans with post-traumatic stress disorder (PTSD), Johnson has witnessed the powerful effects of animals. “One veteran couldn’t leave his home without his wife until we placed a dog with him and in less than a week he was able to go around his town,” she says.

Health.com: 12 Signs You May Have an Anxiety Disorder

Pets may reduce your blood pressure

It’s a win-win: petting your pooch or kitty brings down blood pressure while pleasing your pet. Researchers at the State University of New York at Buffalo discovered that in people already taking medication for hypertension, their blood pressure response to stress was cut by half if they owned a cat or dog.

A dog is the best companion for a stroll—even better than a friend. Johnson—co-author of Walk a Hound, Lose a Pound—led a study at the University of Missouri that found that dog walkers improved their fitness more than people who walked with other people. A separate study found that dog owners walked 300 minutes a week on average, while people who didn’t own dogs walked just 168 minutes a week. And a study in the Journal of Physical Activity & Health found that not only did dog owners walk more than non-owners, they were also 54% more likely to meet the recommended levels of physical activity.

Health.com: 25 Fat-Burning Exercises You Can Do Anywhere

Lower cholesterol, stress, and blood pressure levels combined with increased fitness may add up to a reduced risk of cardiovascular disease. That’s a theory supported by the American Heart Association. In 2013, the AHA reviewed numerous studies examining the effects of pet ownership on cardiovascular disease risk and concluded that having a furry friend, particularly a dog, is associated with a reduction in risk and increased survival among patients.

Pets may prevent allergies in children

If you had a pet as a kid, you may be in luck. In a study published in Clinical & Experimental Allergy, children who were exposed to pets before they were six months old were less likely to develop allergic diseases, hay fever, and eczema as they got older. “In the first year of life, babies who are exposed to dogs in the household are more likely not to have allergies, asthma, and fewer upper respiratory infections,” says Johnson. “If exposed at an early age to dander and allergens, we may be less reactive to them over time.” And kids who grow up around farm animals, dogs, or cats typically have stronger immune systems and a reduced risk of developing asthma or eczema.

Pets can provide social support for their owners, who tend to have better overall wellbeing than non-owners, according to a study published in Journal of Personality and Social Psychology. And a large review of studies by the British Psychological Society found that dogs especially promote therapeutic and psychological wellbeing, particularly lowering stress levels and boosting self-esteem, as well as feelings of autonomy and competence. “The calming presence and the social bond that pets bring can be very powerful,” says Dr. Christenson. “Animals give something to focus on instead of the negative thoughts a depressed person is prone to have. When a pet pays attention to you, they’re giving you unconditional love and acceptance.” 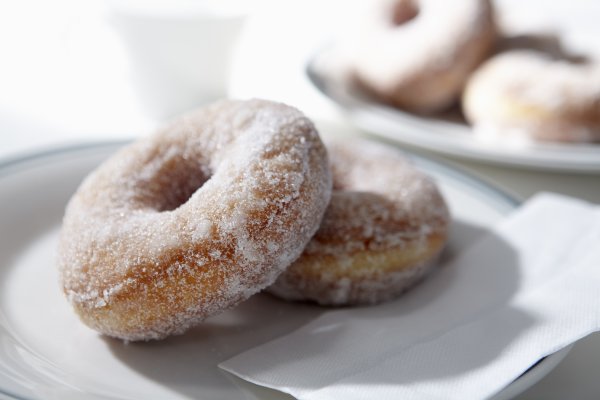 5 Smart Steps to Cut Down On Sugar
Next Up: Editor's Pick