10 Things You Should Never Do When You’re Angry

Getting into a heated argument doesn’t just put you in a bad mood. It can also compromise your ability to perform everyday tasks—like driving—in ways that could be dangerous for you or the people around you. Here, top experts discuss what you should never do when under the influence of anger, with tips for regaining your composure.

You shouldn’t sleep on it
The saying “never go to bed angry” is valid advice. Going to sleep may reinforce or “preserve” negative emotions, suggests a study in the Journal of Neuroscience, which found that sleep enhances memories, particularly emotional ones. “We are learning that sleep seems to help us process and consolidate information we acquire while we are awake,” says Allen Towfigh, MD, a New York City-based board certified sleep medicine doctor and neurologist. So going to bed after an argument will likely cause that experience to be consolidated more effectively than if you went on to remain awake for that same eight-hour period, says Dr. Towfigh.

You shouldn’t drive
Operating a motor vehicle when you’re enraged can be dangerous. Research shows that angry drivers take more risks and have more accidents. “When you’re angry, you’re primed for attack, so it’s not a good time to jump in a vehicle,” says David Narang, PhD, a clinical psychologist in Santa Monica, Calif. “In addition, anger gives a person tunnel vision—you stare straight ahead and may not see a pedestrian or another car coming into your peripheral vision crossing the street.” If you must drive when angry, Narang suggests opening your eyes purposefully and looking around you to avoid tunnel vision.

You shouldn’t vent
Getting anger off your chest sounds like a good idea, but it may actually make matters worse. In fact, people who simply spent five minutes reading another person’s online rants became angrier and less happy in a study published in the journal Cyberpsychology, Behavior and Social Networking. An earlier study also showed that venting anger by hitting pillows not only increased anger at that moment but made aggressive behavior more likely in the future. “They feel validated in what they’re saying by venting,” says Narang, “but they’re not less angry.”

You shouldn’t eat
Soothing your anger by reaching for food can backfire in a couple of ways, says Kathy Gruver, PhD, author of Conquer Your Stress With Mind/Body Techniques. “When we are angry, we often make unhealthy food choices,” she says. “No one ever reaches for broccoli. We go for the high-sugar, high-fat, carbohydrate-loaded comfort foods.” In addition, a heightened state of emotions sparks the fight or flight response, where the body thinks it’s in danger. In such a state, digestion takes a backseat to the “emergency” at hand and does not function optimally, says Gruver. This may result in diarrhea or constipation.

You shouldn’t keep arguing
Staying in the conversation when you have difficulty modulating your anger makes it likely you’ll say things you’ll regret, says Christine M. Allen, PhD, psychologist and coach from Syracuse, NY. “If it’s possible you will say hurtful things that you’ll regret and can’t take back, ask for a ‘time out’ with intention to come back to the conversation,” she suggests. You may need 10 minutes or 10 days. “It’s the willingness to come back to the conversation and initiate that is key,” Allen says. Use the time out to actively calm the mind and the body so that you express yourself in a more mindful, intentional manner.

You shouldn’t post about your conflict on Facebook
When you’re angry, broadcasting your feelings to your friends and family on Facebook and other social networks will more than likely come back to haunt you, says Narang. “Posting something publicly can’t be taken back,” he says.

You shouldn’t write emails
The same applies to sending an angry email—you can’t take back a heated rant after you hit the send button. If you can’t resist writing down your angry thoughts, jot down your feelings in a Word document, says Allen. “This way you can’t send it hastily and can still safely clear out your feelings.”

You shouldn’t drink alcohol
Reaching for a glass of wine to calm yourself down after an angry encounter often does the opposite, says Narang. “Alcohol makes it more likely you’ll act out your anger because it removes impulse control.” Alcohol lowers inhibitions by acting on the frontal lobes of the brain, which are responsible for controlling the impulses that prevent us from giving in to urges to harm others or ourselves. “This may lead to more permanent destruction by doing things you’ll regret, all from a temporary emotion,” says Narang.

You shouldn’t ignore your blood pressure
The risk of a heart attack and stroke increases in the two hours following angry outbursts, especially among former heart attack patients, according to a study from the European Heart Journal. Heart attack risk increased nearly five times and stroke risk rose by three times. “If you’re prone to high blood pressure, one of the smartest things to do when angry is to check it,” says Bradley Bale, MD author of Beat the Heart Attack Gene: The Revolutionary Plan to Prevent Heart Disease, Stroke, and Diabetes. “Individuals who become angry should know how their blood pressure responds. If it’s going up, they need to work diligently to manage their anger with exercise, better sleep, and bio-feedback techniques.”

You shouldn’t ruminate
Obsessively thinking about ways the other person harmed you or was unfair to you—known as rumination—does not resolve anything, says Allen. If you find yourself on the receiving end of someone else’s anger, you may be able to calm them down by first keeping your own cool, says Narang. Start out talking to the angry person in a manner that matches his or her level of emotion and then gradually become calmer and steadier as you speak to them. “This leads them to a calmer place,” says Narang. 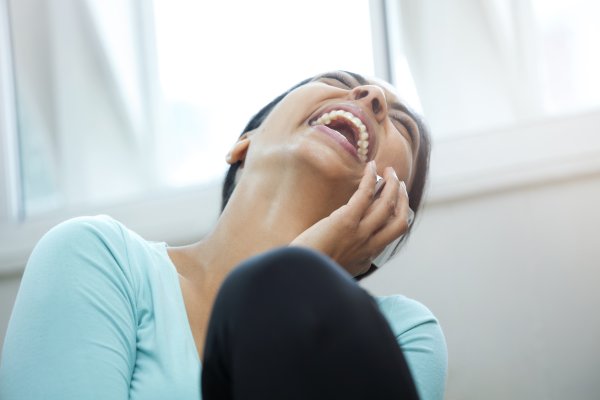 Laughter Therapy Is The New Meditation
Next Up: Editor's Pick