'Hope Gives You the Strength to Act.' Portraits of Russians Risking Everything to Support Ukraine

Katya lost her job after signing a letter protesting the invasion. “What’s happening now is really a tragedy. I am worried about the intensification of repression; I have a feeling that people like us are not welcome here.”
Mary Gelman
Photographs and interviews by Mary Gelman | Words by Tara Law

When words are so closely controlled that it’s a crime to call a war a war, what drives someone to speak out?

The Russian protesters seen here cite a variety of things. One is a sense of moral responsibility: to fight tyranny and to put an end to a conflict that is claiming the lives of Ukrainian civilians. For some, it’s anger—rage that such crimes are being carried out in the name of the Russian people, and that authorities have detained thousands of Russians for daring to protest.

Undergirding all these feelings, however, is an enduring hope: a dream of a better, freer Russia, and an end to the violence in Ukraine.

“Hope gives you the strength to act,” says Mary Gelman, the Russian photojournalist who made these portraits. “If you think that everything is doomed and you are nothing, you become a very comfortable instrument for the regime.”

Read More: ‘There’s an Atmosphere of Fear.’ With Flights Banned, Russians Are Fleeing By Train for Europe

Katya, who lost her job at Moscow cinemas after signing a letter protesting the invasion, takes heart from other dissidents. “I see a lot of like-minded people who inspire me, and I am not so afraid with them here,” she says. “We have us, and we haven’t been broken. There are more of us who are against this, but the power wants to convince us it’s the opposite.”

Hope is also an important motivator for Gelman herself, who has chosen to continue working as a photojournalist despite considerable risks. Even before the invasion of Ukraine, journalists who contradicted the government-sponsored narrative in Russia faced harassment, imprisonment, and even death. Gelman sees it as her duty to show different points of view—something that’s even more essential in a time of censorship and propaganda, she says.

“Loving your motherland does not mean supporting the power and always agreeing with them,” Gelman explains. “It’s wanting a better life for your people, saying to the authorities ‘no’ or ‘you’re wrong,’ and trying to change something if needed. It’s hard to do it in this authoritarian regime, but necessary.”

Palad’d’a, a St. Petersburg artist, feminist, and member of the Udmurt people, spoke out against the war on social media. She was imprisoned for two days. “I don’t think the monsters will disappear if you close your eyes ... The main thing is not to keep silent.”
Mary Gelman
Elena Osipova, a 77-year-old artist known as the “conscience of St. Petersburg,” mounted her first protest in 2002. The day of the Ukraine invasion, a Moscow reporter phoned her for comment. “I said, ‘The Russian Führer comes to Anschluss.’”
Mary Gelman
Elena was sentenced to five days’ imprisonment for wearing a green ribbon, a symbol of peace, in her hair. “I can talk only about this war. Other topics are pointless to me. To be apolitical now is a crime.”
Mary Gelman
Misha attended antiwar protests in St. Petersburg, and was tased by police and imprisoned for five days. “I believe we can build a country that is free, proud, and open to the world. But first, the war must end!”
Mary Gelman
Zlata, who has HIV and cervical cancer, was arrested at a protest and imprisoned for 15 days. “The police took our phones, insulted me, and called me a ‘whore’ and ‘contagious’ ... They dragged me across the floor, beat my arms, and spat at me.”
Mary Gelman
Nika, a student at St. Petersburg State University, faces expulsion for antiwar activities. She has been detained five times for her work as a photojournalist for the independent media organization SOTA. “We are doing everything to stop this madness.”
Mary Gelman
More Must-Read Stories From TIME 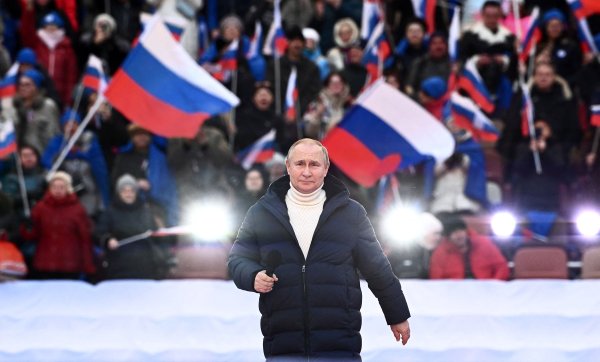 For Putin, It's All About the Money
Next Up: Editor's Pick