Two and a half weeks after extending a partial lockdown into a shutdown of the entire city, Shanghai shows few signs of easing its COVID-19 controls.

On April 20, nearly half of the 25 million residents were able to go outdoors, albeit in limited fashion, as authorities declared the coronavirus to be under “effective control” in parts of China’s most populous city. But on April 22, many restrictions on movement were reinstated, causing confusion and frustration.

Electronic alarms are reportedly being installed at the homes of people testing positive, to prevent them from leaving. Meanwhile, some areas are being evacuated for district-wide disinfection and mass transfers to quarantine centers are causing widespread disruption. Other residents, forced to isolate at home, are finding it difficult to source food and other essentials from overwhelmed delivery services.

Official pronouncements underscore China’s determination to stick to its zero-COVID policy. That means that cities across the country will continue to face restrictions as authorities struggle to keep a lid on increasingly transmissible variants.

As of April 19, more than half of China’s biggest cities were under some form of lockdown. Industrial cities and trading ports—including vital hubs like Changchun, Jilin, Shenyang, Tianjin, Shenzhen and Guangzhou—have shuttered businesses, imposed travel restrictions, or told residents to stay home.

That’s causing concern about the impact on China’s domestic economy—and the global one.

Read More: My Daughter Was Alone in the Hospital for 5 Days.’ Chinese Parents Protest Child Separation for COVID-19

“The already extensive disruptions to global supply chains are being exacerbated by the lockdowns in China, adding to inflationary pressures and difficulties in procuring a broad range of consumer goods,” says Eswar Prasad, a professor of economics and trade policy at Cornell University and the former head of the IMF’s China Division.

China’s first-quarter GDP rose 4.8% according to data released Monday by the National Bureau of Statistics, but the bureau warned of economic headwinds. “We must be aware that with the domestic and international environment becoming increasingly complicated and uncertain, economic development is facing significant difficulties and challenges,” it said in a statement.

View of residential units during a Covid-19 coronavirus lockdown in the Jing'an district of Shanghai on April 21, 2022.
HECTOR RETAMAL/AFP via Getty Images

How China’s lockdowns will affect the global economy

In an April 21 speech, President Xi Jinping emphasized the resilience of China’s economy. He said the country offered “powerful momentum” for recovery from COVID-19 and minimized concerns about the economic impact of the extensive lockdowns, calling for better coordination between major economies to prevent “severe and negative” spillover effects.

But China’s Premier Li Keqiang has issued several warnings about the risks to economic growth in recent weeks. The unemployment rate across 31 major Chinese cities also rose from 5.4% in February to 6% in March—the highest on record, according to official data going back to 2018.

“China’s COVID restrictions are weighing heavily on its domestic demand, which has already been weak even before the recent Omicron outbreaks and lockdowns,” says Tommy Wu, a lead economist from Oxford Economics based in Hong Kong.

Those same restrictions, he adds, are now “also affecting the country’s industrial production and export activity, which will amplify the ongoing global supply disruptions.”

“If Shanghai cannot resume production by May, all of the tech and industrial players who have supply chains in the area will come to a complete halt, especially the automotive industry,” he said in a WeChat post. “That will pose severe consequences and massive losses for the whole industry.”

He Xiaopeng, CEO of Electric vehicle company Xpeng, underscored the warning, saying that Chinese automakers may have to halt production in May.

David Dollar, a senior fellow at the Brookings Institution, says that while specific sectors such as autos will suffer, the hit to the global growth rate should not be too severe.

As for inflation, “some specific products will continue to have price spikes,” he says, but “American consumers can look forward to inflation gradually tapering as the Fed tightens monetary policy.”

However, Wu the economist cautions that there will likely be supply shortages of some consumer goods in the U.S. in the coming months: “Notably electronics, home appliances, and also apparel and garments to some extent.”

At Cornell, Prasad agrees. “The Chinese economy’s sheer size and its importance to global supply chains together imply that China’s zero-COVID policy is having ripple effects that touch every corner of the global economy,” he tells TIME. 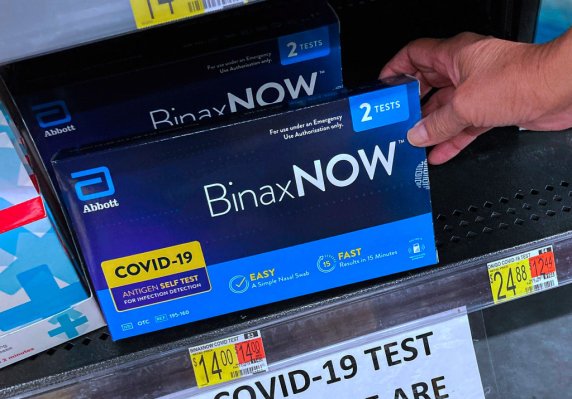 Why the Rise of Rapid Tests Makes Case Counts Hard to Trust
Next Up: Editor's Pick