'My Daughter Was Alone in the Hospital for 5 Days.' Chinese Parents Protest Child Separation for COVID-19

A little girl gets tested for the COVID-19 in a residential block in Shanghai, China Saturday, April 9, 2022.
Shen Chunchen–Future Publishing/Getting Images
By Rebecca Kanthor / Shanghai

Yoga instructor Jenny Tao was home with her husband and two kids in their one-bedroom Shanghai apartment last month when she got the phone call. She and her husband, a community health worker, had tested positive for COVID-19.

They were taken to a special hospital for COVID-19 patients with their 3-year-old son, who also tested positive. However, their 10-year-old daughter tested negative and was sent on her own to a quarantine medical center. When she tested positive the next day, she was sent to the hospital, but to a separate ward from the rest of her family.

“My daughter was alone in the hospital for five days,” says Tao. “We made many phone calls. They kept saying that the kids have to go to the children’s ward and there’s staff there to take care of them. But in reality, there was no one taking care of our daughter. All the kids in the ward had to take care of themselves. The situation in the ward was a bit chaotic and they barely saw any nurses except at meal times.”

Tao and her husband texted with their daughter regularly, trying to support her from afar. Eventually, after calling different departments several times a day, a doctor approved her daughter’s transfer so the family could be together.

China’s dynamic zero-COVID policy requires those who test positive, including infants and children to isolate in quarantine facilities or hospitals, with no family contact allowed. The practice has been carried out in cities throughout China since the beginning of the pandemic. An Israeli businessman, who asked that his name not be used for fear of backlash from authorities, tells TIME that two of his children, aged 9 and 13, were isolated in a Shanghai hospital for a month after testing positive in March 2020. Health workers in hazmat suits arrived at their door in the middle of the night to take them away.

“I had to wake them up and tell them, ‘Boys, you are positive and you have to go to the hospital,’” he says. “That was really heartbreaking for me.”

An outcry over child separation

A fast-moving outbreak of the Omicron COVID-19 variant in Shanghai, mainland China’s most populous and international city, is demonstrating the drawbacks of the government’s approach to the virus. The entire city of 25 million people went into lockdown on April 1 after some 10,000 cases were detected. Since then, public anger has begun bubbling up—and spilling over onto both domestic and international social media.

Public transport has been suspended, so has the use of private vehicles, making it difficult for people with medical conditions to access doctors and hospitals. Residents are unable to leave their homes even to purchase essential items, and delivery services have been overwhelmed. Many residents have reported trouble getting enough food to feed their families. People have been forced to organize bulk orders for sharing with their neighbors, and an informal bartering system has been established in many housing communities.

A Shanghai resident smokes out the window on April 3, 2022 during the Chinese city's lockdown.
Costfoto/Future Publishing/Getty Images

But, the child separation policy has been a particular source of anger. Parents began openly calling to end the policy after videos of unaccompanied infants crying in a Shanghai COVID-19 hospital went viral online. Articles arguing against separation were posted online by medical professionals, lawyers, and therapists. Foreign diplomats from more than 30 countries sent letters to the government to protest the practice. An online petition that circulated for a few hours was censored, as have many critical posts on social media, but many others have remained online. On Tuesday, the U.S. ordered all non-essential government staff to leave Shanghai, citing the COVID-19 outbreak and the restrictions on the city.

Officials have now made what could be a rare concession—announcing on Apr. 6 that some children who test positive for COVID-19 would not be separated from their parents.

Since the pandemic began, China’s case numbers have been kept low compared to the rest of the world because of exacting zero-COVID restrictions, and to a large extent, its people have supported stringent pandemic measures. Tight controls are one reason China has reported some of the lowest number of COVID-19 related deaths since the beginning of the pandemic. A comprehensive vaccination program is another, with some 87% of the population fully vaccinated. The figure includes the 84 million children, aged 3 to 11, who had received two shots by November 2021. Mortality has also been low: up until March, China recorded fewer than 5,000 deaths, the large majority from early 2020.

With such manageable figures, health authorities have been able to closely track each case to prevent widespread transmission. But the surge in cases brought by the highly transmissible Omicron variant poses enormous challenges. Although an overwhelming majority are asymptomatic, as of Apr. 11, Shanghai had reported more than 180,000 cases since its outbreak began in early March. (By comparison, the city notched fewer than 4,500 cases during the first two years of the pandemic.)

Shanghai’s outbreak has now exceeded the 2020 outbreak in Wuhan, where the virus that causes COVID-19 was first discovered. But for many residents, the fear of getting COVID is no longer about getting sick—it’s about the disruption to their lives that regulations entail. For parents, that means the dread of being separated from their children. Public health officials have maintained the policy of separating families is necessary to stop transmission of the virus. Over the past few months, videos taken across China of small children in adult-sized hazmat suits being taken away have sparked some attention online, but not enough to cause large-scale public outcry. That appears to be changing.

Among the critics of family separation is Xuan Li, an assistant professor of psychology at New York University Shanghai. “Children or their families should never be subjected to this kind of stress that might have a long-term impact on child development and family functioning under any kind of circumstances,” she says. “ Keeping parents and children separated is simply counter-productive on all fronts.”

The Israeli father whose children were separated from him in 2020 says seeing these recent videos has brought back bad memories from his own family’s experience. “Back then, I could understand nobody knew what was going on,” he says. “But after two years, I would expect somebody to think a bit deeper about the fact that people will be traumatized by this experience, and it’s shocking that nobody is thinking of this aspect.”

His younger son developed anxiety issues while in the hospital and a therapist had to be called in to help. Even today, the father said, his son remains anxious about mandatory COVID-19 tests.

Since the latest ruling, at least some parents are now permitted to accompany children who test positive to quarantine facilities, no matter the parent’s COVID-19 status. Parents of children with “special needs” can also apply to stay with them if they sign an agreement saying they understand the health risks. On Apr. 5, Chinese media reported that one COVID-19 quarantine facility would accept children with their parents.

Jenny Tao, who was released from the hospital with her family the same day the announcement was made, says it’s a positive development. “I’m glad to hear about the change,” she says, because children, especially young kids, need their parents by their side to take care of them.”

But while speaking with TIME after the government statement was released, one parent heard that his son’s classmate had tested positive. The family remains unclear whether their child will be sent to a quarantine facility alone

Xuan Li says parents and experts who read the wording closely remain unsatisfied with the statement and that the fear of separation remains real. “There are just a lot of unknowns there,” she says. “There is very little information on how exactly that would be executed. I see no signs that this issue is effectively solved.” 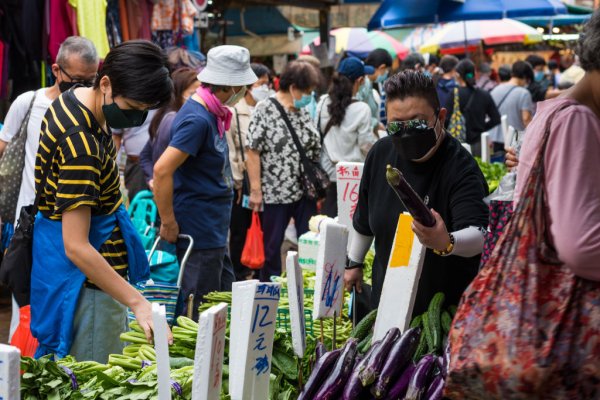