As Russia’s war on Ukraine continues, experts around the world are drawing attention to the conflict’s potentially devastating impact on the global food supply. Together, Ukraine and Russia supply a third of the world’s global wheat and barley exports, according to the Associated Press. Corn is ready to be planted, and wheat that was planted in the winter will be ready for harvesting soon, but many Ukrainian farmers are off fighting. Fuel and fertilizer shipments are also held up at checkpoints.

It remains to be seen how much the food chain will be disrupted. Ukraine’s deputy minister of agrarian policy and food, Taras Vysotsky, told local media that the country has enough food reserves—including five years of sunflower oil, two years of corn, and a year-and-a-half of sugar. But other countries that rely on Ukrainian food imports are also at risk.

“We are particularly concerned about countries like Lebanon, Pakistan, Libya, Tunisia, Yemen, and Morocco, which rely heavily on Ukrainian imports to feed their population,” U.S. Deputy Secretary of State Wendy Sherman, said on March 30 at the U.N. Security Council.

This would not be the first war to contribute to hunger around the world. Conflict can block international trade and draw farmers away from their fields, causing disruptions that continue even after peace arrives. In fact, one of modern history’s most noted examples of this situation took place almost exactly a century ago and closely involved Russia and Ukraine, as the former came to rely on the latter to endure one of the worst famines in history—a disaster the response to which helped reshape global roles in ways that are still playing out today.

Then as now, the United States played a key role in the relief effort in the region, in an expansion of similar efforts launched during World War I. And at the helm was an unlikely hero: Herbert Hoover, the man who would go on to be known as one of American history’s worst Presidents, but who historians say ran one of the country’s best humanitarian relief programs.

Read more: The Real World War I History Behind the Movie 1917

Portrait of American politician (and future U.S. President) Herbert Hoover, as he sits at a desk, during his tenure as head of the U.S. Food Administration, 1917.
PhotoQuest—Getty Images

Hoover’s career as a food-relief coordinator began in the fall of 1914, shortly after the Germans occupied Belgium. The country of 7 million people was at risk of starvation because it depended on outside sources for almost all its food.

“This was also the time of the harvest, and so the production of food was incredibly disrupted by the war,” says Doran Cart, Senior Curator at the National WWI Museum and Memorial.

While working as a mining engineer in London, Hoover was tapped to run the Commission for Relief in Belgium, an international effort delivering food—especially flour—and soap to the Belgians and, to a smaller extent, Belgian refugees living in northern France.

“What Hoover did was unprecedented because we did not have a world full of NGOs with specialized operations in 1914,” says George H. Nash, a historian and author of The Life of Herbert Hoover: Master of Emergencies.

Once the U.S. entered the war in 1917, Hoover ran the United States Food Administration, to manage food consumption at home and wartime food shipments to Allies.

“By that point, Hoover’s an international hero,” says Nash.

Read more: The 5 Most Surprising Inventions to Come Out of World War I

The slogan for this campaign became known as “Food Will Win the War.” To send food over to European Allies, Americans began to “Hooverize” or ration their food, eating more peanut butter and participating in “Meatless Mondays” and “Wheatless Wednesdays.” But in the era of submarine warfare, it was a risky operation to ferry food shipments across the Atlantic Ocean to Europe, so not everything that was saved made it to its destination. “Many of these relief ships were sunk,” according to Cart.

And the end of the fighting in 1919 didn’t mean the world was in the clear when it came to food security. In 1920, drought began in Soviet Russia, leading to a failed harvest and then famine starting in the summer of 1921. Peasants didn’t have surpluses to lean on because they had to hand them over to the Bolsheviks. Up to 5 million Russians are believed to have starved to death. Disruptions and dislocations caused by World War I and the Russian Revolution exacerbated the crisis. Even though Ukraine was not immune to the crisis, Soviet leadership called on people there to help Russians in other regions. (The USSR absorbed Ukraine in 1922.)

“[The Soviets] are encouraging the famishing people in southern Ukraine to send food to the Volga,” says Bertrand M. Patenaude, author of The Big Show in Bololand: The American Relief Expedition to Soviet Russia in the Famine of 1921.

During this period, Hoover continued the work he had begun during the war, running an organization called the American Relief Administration, which worked to combat the Great Famine of 1921. He arranged for the Soviets to also purchase corn and wheat seed from the American Midwest.

“The American seed saved the harvest of 1922; it was a very good harvest,” says Patenaude.

By the summer of 1922, American efforts were feeding 11 million Soviet citizens a day, according to Patenaude. Food relief was also a form of soft power, to show the Russians “what capitalist benevolence” looks like, as he puts it.

But on a personal level, the special child-feeding programs meant the most to Hoover, based on his humble upbringing.

“He was an orphan before he was 10 years old, and he always had a special affinity to little children in the sense of when he saw them suffering, it just moved him so,” says Nash. “It was Hoover who originally had the idea of setting up UNICEF.”

Hoover’s food relief programs provided a model for the United States’ role in a humanitarian emergency. Today, the U.S. is providing more humanitarian assistance donations to Ukraine than any other country.

World War I was a turning point in terms of expanding the U.S. role as a leader in overseas humanitarian aid efforts. It’s a role that remains an important part of the global dynamic, even as people around the world continue to debate how and whether the U.S. lives up to it. “This assumption has developed for a long time that if there is a disaster in the world, Americans—whether in private capacity or governmental capacity—will be there,” says Nash. “And I think a lot of that expectation is traceable to the efforts that Hoover made” 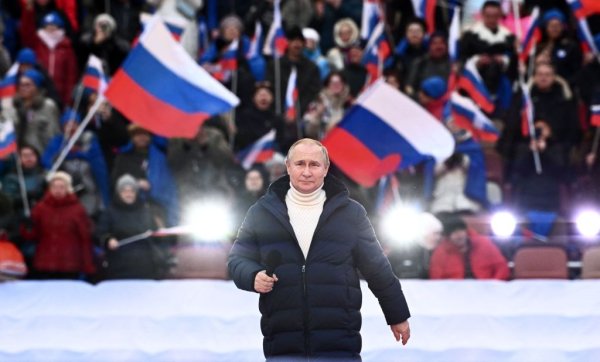 Russia's Problems Go Far Beyond Putin
Next Up: Editor's Pick