Putin's Isn't the Only Regime Leveraging Fossil Fuels for Aggression

“Nothing special is happening,” a frustrated local journalist tweeted recently about a humanitarian crisis in her post-Soviet homeland. It’s just our neighbor, she explained, “trying to finish the ethnic cleansing.”

Anush Ghavalyan, a TV presenter, wasn’t talking about Russia’s ongoing invasion of Ukraine, but a disputed region called Nagorno-Karabakh, a self-declared independent republic nestled within the internationally recognized borders of Azerbaijan, but with deep cultural and historical links to Armenia. A year and a half ago it became the site of a bloodbath when energy-rich Azerbaijan sought a violent solution to the century-old conflict over who controls the region. Despite the November 2020 ceasefire that sealed Azerbaijan’s partial victory, persecution of the remaining indigenous Armenian population continues. And, even as the war in Ukraine has drawn the world’s attention to the consequences of depending on Russia for energy, this lesser-known conflict also shines a light on how fossil fuels can become a weapon of coercion—and whether the world is really ready to break their grip.

Following the Russian Empire’s WW I-era collapse, the South Caucasus region saw the reemergence of Armenia and Georgia as independent states, joined by their new neighbor Azerbaijan. Competing territorial claims among the three contributed to their eventual Sovietization. When it came to Nagorno-Karabakh, Soviet leader Joseph Stalin saw an autonomous Armenian province under Azerbaijani administration as conflict resolution. Two post-Soviet wars, in the early 1990s and in 2020, would prove him wrong.

Part of Stalin’s calculation was based on economics: Azerbaijan’s energy riches made it more important to him. All these years later, the country is still a case study in how controlling energy resources creates geopolitical power. But all of Nagorno-Karabakh’s natural gas—which is its leading source for heat, hot water, and electricity—comes via a single pipeline that runs from the disputed region’s lifeline, Armenia. Since the 2020 war, some of the territory the pipeline traverses is Azerbaijani-controlled—meaning that Azerbaijan has the de facto power to turn the gas on and off at will.

Just a few weeks ago, on March 8, International Women’s Day, Nagorno-Karabakh’s primary energy supply was abruptly cut. Locals initially joked that Azerbaijan’s authorities, assumed to be behind the stoppage, were congratulating the women of Nagorno-Karabakh, giving them a break from cooking or showering.

But the problem lingered for weeks. Affected were all of the region’s households and critical infrastructure: hospitals, schools, bakeries. March was unseasonably cold this year, with abundant snow and freezing temperatures. There are neither enough electrical heaters or boilers, nor extra electricity to make up for gas. Azerbaijan denied that it had blown up the gas pipeline. One ruling party lawmaker said that Armenians themselves had damaged the pipeline to smear Azerbaijan: “This is an Armenian plot, Armenian filth.” But, following an outcry, Azerbaijan fixed the pipeline, though only restoring supply for one short weekend without acknowledging intentional damage, while, according to Nagorno-Karabakh’s Armenian authorities, installing a shutoff valve.

Read more: The World Has a Russian Oil Problem. Here’s the Best Way to Solve It

An authoritarian regime leveraging fossil fuels to subjugate a people seeking self-determination is neither new nor unique. Experts have used the term “petro-aggression” to argue that oil-rich regimes are more conflict-prone. Others have argued that, domestically, overreliance on oil is linked with repression, since resource-rich states rely less on tax-paying citizens and so are less likely to consider their voices. To overcompensate for illegitimacy, authoritarian states often lean on a demonized enemy to rally against.

In Armenians, Ilham Aliyev, who has been Azerbaijan’s president for 18 years, has found the perfect foe. In his own words, “Our main enemies are Armenians of the world and the hypocritical and corrupt politicians under their control.”

The gas crisis is hardly the first time Aliyev’s line of thinking has found expression. Since replacing his father as president in 2003, Aliyev has, one exiled Azerbaijani dissident has said, “upgraded Armenophobia to the levels of fascist Germany’s anti-Semitism.” In 2005-2006, Aliyev completed the erasure of over 28,000 medieval Armenian monuments in the exclave of Nakhichevan, which were supposed to be protected by UNESCO but that Aliyev now says never existed to begin with. And 2012 saw his extradition, pardon, and promotion of an unremorseful Azerbaijani officer who had killed his sleeping Armenian classmate at a NATO training in Hungary. The state-sponsored demonization of the Armenians extends to denial of the WWI-era Armenian Genocide and dismissal of Armenian history as fake. Azerbaijani dissidents who challenge this narrative are swiftly punished. The elderly Akram Aylisli, once Azerbaijan’s most revered author, now lives under house arrest for writing a novel memorializing the Armenian antiquity of his birthplace.

Today, Armenian cemeteries newly occupied by Azerbaijan are being bulldozed, as seen by Caucasus Heritage Watch satellites, while other historical sites are being proclaimed “artificially-aged” or stolen.

The sense that Armenians deserve punishment for the early 1990s Nagorno-Karabakh war’s outcome, to avenge the massively displaced Azerbaijani population that lived as poor refugees for decades, has meanwhile continued in Azerbaijan, despite the fact that it brutally conquered most of contested Nagorno-Karabakh in late 2020. This March, when Italian journalist Claudio Locatelli interviewed an Azerbaijani volunteer soldier in Ukraine, what Aliyev calls “the Azerbaijani model of multiculturalism” was on full display. “We are all brothers: Muslims, Jews, Christians,” boasted the soldier. But when asked of Armenians, he said “they are worse than animals.”

Demoralizing the remaining Armenians in Nagorno-Karabakh into self-exile is the obvious goal. But such policy requires tacit international approval in the form of a near universal silence.

The ongoing Russian invasion of Ukraine has presented Aliyev just the opportunity he needs. In fact, the West’s moving away from Russian energy sources has given Azerbaijan even more power than before. In early February, the E.U. announced a two-billion-euro package in exchange for Azerbaijani natural gas to make up for anticipated Russian export shortages. Then the day before the invasion of Ukraine, Azerbaijan signed an alliance treaty with Russia. On Thursday, the U.S. embassy in Baku tweeted the receipt of over $30 million worth of equipment sent to Azerbaijan by the U.S. Department of Defense; earlier this year, the U.S. Government Accountability Office called out the Departments of State and Defense for failing to provide Congress with adequate information about aid to Azerbaijan, which is supposed to be restricted except under specific circumstances.

The weather is warming up in Nagorno-Karabakh. Azerbaijan may turn the gas on and off again, whenever it so wishes. That short window of restoring gas supply for just a weekend? Shortly after, the local United Nations office in Azerbaijan agreed to attend an event in a city that has seen multiple rounds of ethnic cleansing, most recently of Armenians in 2020. The presence of international organizations in newly conquered territories is critical for legitimizing Aliyev’s proposition that “territorial integrity” is a license for ethnic cleansing.

Read more: The U.S. Buys Little Oil From Russia. Its Ban Will Still Have Big Consequences

Following the March 18 U.N. event, Azerbaijan’s army captured one more Armenian village in Nagorno-Karabakh, while harassing many other villages with loudspeakers, telling the residents to “evacuate,” for no reason whatsoever. The town of Parukh’s entire population is now homeless. After public statements from Moscow, Paris, and Washington on this ceasefire violation, Azerbaijan said it would restore, you guessed it, the gas supply. As of this writing, the gas is back on. But no one knows for how long. “If each day we need to give one village for natural gas,” a local resident of Nagorno-Karabakh’s capital and largest city, Stepanakert, told a TV journalist, “we don’t need that natural gas.”

As seen in the sanctions against Russia, fossil fuels are no longer bullet-proof shields in international relations. This is a hopeful sign: Many nations have shown that they are prepared to look for other sources or to accelerate their green-energy transitions, rather than letting aggression slide.

And yet the White House is expected to continue to waive the only sanction against Azerbaijan, Section 907. Despite recognizing the Armenian Genocide last year, the Biden Administration apparently sees no dilemma in limiting its response to the crisis to sporadic statements of “deep concern.” Even USAID chief Samantha Power, an anti-genocide advocate and a long-time friend of the Armenian-American community, is not pushing for substantial new humanitarian aid for Nagorno-Karabakh.

Today, Aliyev uses energy to gaslight Nagorno-Karabakh, one “nothing special is happening” at a time. Tomorrow, his genocidal aggression will continue—unless the West shows that it is willing to stand up to Azerbaijan too, and to live without its natural gas. The residents of Nagorno-Karabakh have had plenty of experience going without. 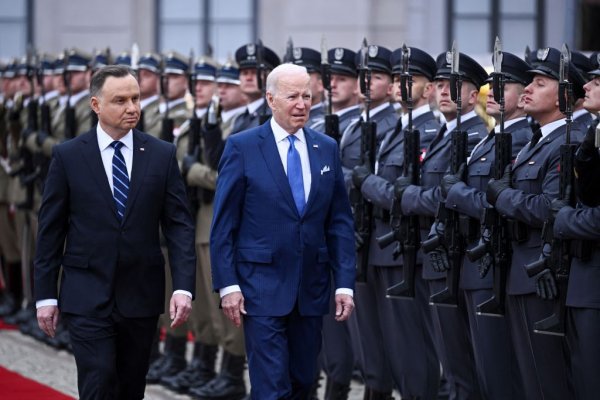