What Biden's Recognition of Armenian Genocide Means to Armenian-Americans

Armenian-Americans have welcomed President Joe Biden’s historic declaration that the killing and deportation of up to 1.5 million Armenians during World War I constituted genocide as a long overdue yet positive step in reckoning with history.

“We affirm the history,” Biden said on April 24. “We do this not to cast blame but to ensure that what happened is never repeated.” The statement, released on Armenian Genocide Remembrance Day, marked the first time a U.S. president formally equated the violence against Armenians with atrocities on the scale of those committed in Nazi-occupied Europe.

Turkey, the modern-day successor of the Ottoman Empire, adamantly denies that the killings were part of a systematic plan to erase the Armenian population that would meet the U.N. definition of genocide. Authors and journalists in Turkey who use the term “genocide” have been prosecuted for “insulting Turkishness.”

The U.S. is now among 30 countries, including France, Germany and Canada, that have formally recognized the Armenian genocide, according to the Armenian National Institute. Other U.S. allies, including the U.K. and Israel, have not. Turkey’s foreign ministry said that Biden’s statement “opened a wound” in Ankara-Washington relations and “deeply injured the Turkish people,” in a statement, according to the Financial Times.

But to Armenians, the statement was a long-awaited acknowledgement of an atrocity against their people they believe has been persistently understated. Over a century later, the events are “primary identity markers” of Armenians around the world, says Mary Kouyoumdjian, a 38-year old Armenian-American composer based in New York. “It means we are constantly looking to the past. I think my generation experiences survivor guilt,” she says.

During World War One, the Germany-aligned Ottoman government accused the Armenians of treachery after suffering a heavy defeat at the hands of Russian forces. On April 24, 1915, Ottoman authorities arrested several hundred Armenian leaders and intellectuals, an event seen by many as the beginning of the massacre. One and a half million Armenians were killed by soldiers and police, or died of starvation and exhaustion in long, cruel marches to concentration camps in what is now northern Syria and Iraq. About 500,000 Armenians survived, and many eventually emigrated to Russia, the U.S. and elsewhere. Turkey claims that 300,000 Armenians died of disease and hunger as they were being deported.

Kouyoumdjian’s great-grandparents and grandparents fled to Lebanon, where they mostly settled in Beirut’s Armenian quarter Bourj Hammud, a neighborhood that was established as a refuge for Armenians escaping the genocide. But during the Lebanese civil war that began in 1975 and lasted until 1990, Kouyoumdjian’s parents were forced to leave, gaining refuge in the U.S. Kouyoumdjian, 38, is the first in her family to be born in America.

For 20 years, her work has involved composing music that integrates documentary and interviews with survivors of war and genocide. She said she can’t find a way to separate herself from the people telling their stories. “A lot of these interviews become a form of processing my own family history,” she says.

Kouyoumdjian has mixed feelings about Biden’s announcement. She says it was a “relief” and has given her a “great deal of faith in the president’s commitment to human rights, over political complexities”. But she says it should have come sooner. “The fact that it took 106 years for the U.S. to say something has meant a lot of damage to Armenians around the world”, she says. The wounds of the past will not fully heal, in her view, until Turkey acknowledges the genocide.

Simon Maghakyan, a human rights activist and lecturer in international relations at the University of Colorado, Denver, says that Biden’s statement was an important step in “healing the Armenian community’s intergenerational trauma”. During the genocide, his great-grandfather, who served in the Ottoman army in World War I, fled to Syria, where he met his future wife, an Armenian refugee. They later settled in Soviet Armenia, where Maghakyan’s parents were born. In 2003, Maghakyan’s family moved to the U.S.

Simon Maghakyan’s paternal family in 1955, all gone now. On the left, holding Maghakyan’s baby father, are his great-grandparents who had survived the Armenian Genocide in Urfa (modern Turkey).
Courtesy Simon Maghakyan

But Maghakyan says that the U.S. recognizing the Armenian genocide “only truly matters” if the White House takes strong measures to help protect the security of Armenians, including in Nagorno-Karabakh, a disputed region over which Armenia and Azerbaijan recently went to war. “Recognizing Armenia’s past without its present is not meaningful,” he adds.

Last fall, in the latest in a series of conflicts in the region, Armenian forces clashed with Azerbaijan, which was backed politically and militarily by its ally Turkey, killing at least 6,000 Azerbaijani and Armenian soldiers. Sarah Leah Whitson, former director of the Middle East and North Africa Division at Human Rights Watch, wrote that propaganda in Turkish media said that Ankara would “finish off” what it started in 1915. “Many Armenians were truly convinced that Turkish forces would attempt to slaughter the population of Armenia as well,” she wrote.

A Russian-brokered peace deal that ended the six-week war required Armenia to hand control of large swathes of territory over to Azerbaijan. Many ethnic Armenians left the territories that were set to be handed over to Azerbaijan and according to the region’s nominally independent Armenian-backed government, over 40,000 Karabakh Armenians have been permanently displaced.

Maghakyan believes the U.S. should adopt measures providing humanitarian relief to displaced Karabakh Armenians, and sanctioning Turkey and Azerbaijan for their involvement in the recent conflict in Nagorno-Karabakh.

Many Armenians have also had to come to terms with what Kouyoumdjian and Maghakyan call “cultural genocide”. Maghakyan has been researching the erasure of Armenian culture for the past 15 years. His 2019 research, conducted independently, indicated over the past 30 years cultural and religious Armenian artefacts were covertly and systematically destroyed in an alleged Azerbaijani campaign to eliminate indigenous Armenian culture in Nakhichevan, an Azerbaijani exclave between Armenia, Iran and Turkey. Maghakyan and Sarah Pickman, a co-author of the report, found that the destroyed artifacts included 5,840 cross-stones, the earliest of which date back to the 6th century, despite a 2000 UNESCO order demanding their protection.

The genocide happened 106 years ago but Maghakyan says it is still a “modern issue” for many Armenians. He wishes the U.S. recognized the Armenian genocide and accounted for it long before he was born. “We might have overcome the intergenerational trauma by now,” he says. 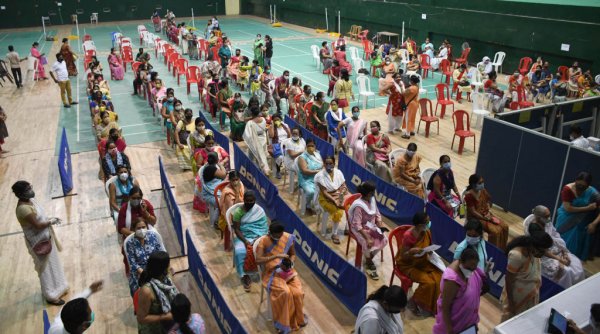 U.S. to Share 60 Million AstraZeneca Doses
Next Up: Editor's Pick