An auto rickshaw driver waits for customers in front of a cinema screening the Bollywood movie "The Kashmir Files" in New Delhi, India on Mar. 17, 2022.
Mayank Makhija/NurPhoto via Getty Images
Ideas
By Debasish Roy Chowdhury
Debasish Roy Chowdhury is the co-author of To Kill A Democracy: India’s Passage to Despotism

Once known as “heaven on earth,” Kashmir today is the world’s most militarized zone. A proper evaluation of the causes of conflict would obviously be the first step in defusing tensions and promoting reconciliation—but a new film is doing the opposite, even as it claims to be honestly confronting the past.

Released in Indian theaters in March, The Kashmir Files is a 170-minute Bollywood drama about the tragedy of Kashmiri Pandits, or Brahmins—the priestly highest caste of the Hindu religion. Hinduism is a minority faith in Muslim-dominated Kashmir, and the Pandits left the region en masse in the 1990s, when they began to be targeted by Pakistan-sponsored militant Islamists.

The Hindi-language film has been given a tax break and is being heavily championed by the Hindu nationalist government of Prime Minister Narendra Modi, who has been urging people to go watch it. Government employees are being offered time off if they do. But the theme of the film, made by a Modi acolyte, and its graphic depiction of the intimidation and killings of the Pandits, is riling up Hindus and aggravating religious discord.

Social media is flooded with videos of members of the audience erupting in rousing hate speeches after seeing the film, with calls for the slaughter of Muslims and a boycott of Muslim businesses. Often, these speeches are staged by Hindu vigilante organizations ideologically allied with Modi’s government. In a climate of growing intolerance, where exclusion and marginalization of Muslims have become mainstream political discourse, the movie is making Indian Muslims even more fearful.

The “truth” that the film claims to reveal is that there was a “genocide” of Pandits in the 1990s, hidden by a callous ruling establishment and a servile media. Pandits were killed in their thousands, it claims, and not in the low hundreds as the government and Kashmiri Pandit organizations have stated.

It’s not clear why the horrors visited upon the Pandits are presented as having been hushed up. The film’s young protagonist learns about it all from files of newspaper cuttings of the time. His inability to remember the events of three decades ago—like the 65% of India’s population below the age of 35—is a function of demographics rather than deceit. Neither is it clear why the film’s central characters repeatedly blame a Congress party-led government in Delhi for the exodus, when it took place during the time of a coalition government that was supported by Modi’s own Bharatiya Janata Party (BJP).

But accuracy is not the film’s priority, nor is it interested in justice and closure for the Pandit community. Instead, the purpose of The Kashmir Files is to inflame hatred against Muslims; against secular parties that Modi’s followers brand anti-Hindu; liberal intellectuals and activists, whose faith in India’s inclusive democracy runs contrary to the supremacist tenets of Hindu nationalism; and against the liberal media that the Hindu right disparages as sold-out “presstitutes.”

Accordingly, Muslims are portrayed as uniformly evil, treacherous and predatory. Even little Muslim boys are shown as demonic. Hindu women are depicted as being coveted by lascivious Muslim men. The latter is a particularly resonant trope employed by the BJP and goes by the term “love jihad”—a supposed Islamist conspiracy to impregnate Hindu women with the end of numerically overtaking Hindus. (In fact, Muslims make up just 14% of India’s population.)

The result of this propaganda is evident in the frenzied reception of the film. In one viral video, an agitated member of the audience can be seen urging Hindu men to preserve their religion by marrying Muslim girls. Majoritarian angst such as this—evident from hashtags like #WakeUpHindu—is what the film aims to fuel, rather than a sincere tackling of the complex story of Kashmir.

The “truth” about Kashmir, a more complex one, is that an endless cycle of alienation, distrust, and violence has been fed by decades of broken political promises, rigged elections, the claustrophobia and humiliation of a constant military presence, foreign-funded Islamist insurgencies, custodial deaths, torture, rights abuses, brutal crackdowns, and the Indian state’s legitimate fears of loss of sovereignty.

Both Hindu and Muslim women trapped in this war zone have faced sexualized violence by militants as well as security forces. Kashmiri Muslims have also died and fled in far greater numbers than Hindus. And many Pandits who braved the militancy and chose to stay were “protected by Muslims,” according to a former Indian intelligence chief. Naturally, none of this has made it into The Kashmir Files.

Modi, who has had no role in the past atrocities or political failures in Kashmir, could have attempted a reset in the region. But as a Hindu strongman, his own need to dominate Muslims and reclaim a supposedly lost Hindu pride commits him to an even more hard-line policy toward Kashmir than his predecessors. Soon after his re-election in 2019, Modi stripped Jammu and Kashmir, the country’s only Muslim-majority state, of its statehood and partial autonomy, imprisoned its elected representatives, sent in an additional 40,000 troops, locked down the region, and imposed a months-long information blockade.

Read More: How It Feels to Be a Muslim Woman Sold by India’s Right Wing

Kashmir’s long struggle for secession validates the Hindu nationalist case that Muslims, with their extraterritorial loyalties, are an existential threat to Hindus and the integrity of India. Kashmir thus fits neatly into the BJP’s use of Muslims as the bogeyman to unite the vastly disparate Hindu voter base against the dangerous “other.” This mass radicalization is driven at various levels—through social media, divisive political messaging, a craven mainstream news media (at times compared with Radio Rwanda), and historical revisionism, increasingly through cinema.

A shared history is central to the construction of group identities and becomes instrumental in the manipulation and weaponization of popular opinion. Historical events that highlight the victimization of Hindus at the hands of Muslims are pivotal in this enterprise. Hence, there has been a noticeable proliferation of Islamophobia of late in Bollywood, especially period films featuring noble Hindus resisting devilish Muslim rulers.

Compared with Nazi films like Jew Süss and Die Rothschilds by some, The Kashmir Files is an escalation of Indian cinema’s revisionist trend, used to justify the brazen Hindu extremism of the present. Lynchings, humiliation, and degradation of Muslims have become order of the day. Calls for genocide and social and economic boycotts of Muslims are widespread. State-sanctioned religious hate has even criminalized the very presence of Muslims through movements against hijabs and the opposition to public prayer.

Drip-fed with nuggets of rewritten history through social media and popular culture, the Hindu vigilantes leading the charge against India’s Muslim population rationalize their bigotry as justice for past wrongs. The deeper India drifts into the abyss of an illiberal future, the more it looks to its past to justify its regression. The more “truth” that films such as The Kashmir Files discover in the process, the more civil conflict the country risks. Climaxing with cries for the extermination of Muslims ringing out from the dim theaters, the film marks a major milestone in India’s rapid descent into darkness. 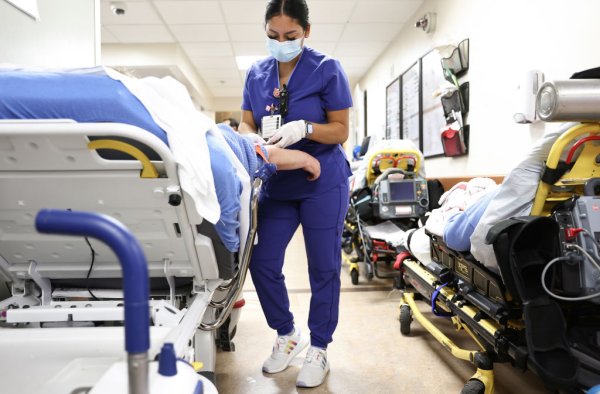 Our Early Confusion About Airborne COVID-19 Transmission Still Haunts Us
Next Up: Editor's Pick