How Russia Is Beating the West at Deterrence

A view of a damaged tank after a shelling, in the pro-Russian separatists-controlled Donetsk, Ukraine on March 8, 2022.
Leon Klein-Anadolu Agency
Ideas
By John Bolton
Bolton was the national security adviser in 2018-19 for President Donald Trump. He was ambassador to the United Nations in 2005-06 and served in the administrations of presidents Ronald Reagan, George H. W. Bush and George W. Bush.

Deterrence is working in the Ukraine crisis, just not for the right side. In this tragedy’s most catastrophic blunder, the United States and its allies failed to deter Russia from invading. President Joe Biden’s plan to create deterrence relied almost exclusively on threats that would be executed only after Russian forces crossed Ukraine’s borders. Unfortunately, the West’s credibility in threatening after-the-fact punishments was shredded by its earlier failures to impose stringent sanctions following the Kremlin’s assaults on Georgia in 2008 and Ukraine in 2014. America’s withdrawal from Afghanistan only increased Russian President Vladimir Putin’s doubts about our resolve.

Even beyond this yawning credibility gap, Biden’s total deterrence package was palpably inadequate. Most seriously, he said in early December 2021, and repeatedly thereafter, that U.S. military force was off the table. This was an unforced, unilateral concession, with no Russian reciprocity sought or given. Biden could simply have said nothing, hiding his intentions, and let the ambiguity weigh on Putin’s mind. Instead, he gave Putin a freebie.

That wasn’t all. No effort was made to inflict harm on Russia pre-invasion. Had appreciable costs been imposed before Moscow’s forces crossed an international border—damages felt in real time—they might have changed Putin’s cost-benefit calculus. For example, there was no push to halt the Nord Stream 2 gas pipeline, let alone economically cripple Russia’s broader energy sector, unless and until all Russian forces were withdrawn from European countries which did not consent to their presence, not just Ukraine, but also Moldova, Georgia and others. Russian financial assets, including those of prominent oligarchs, could have been seized or frozen until Russia’s military build-up on Ukraine’s borders was reversed, and the troops returned to their regular barracks. Sanctions work best when they are massive, swift, and ruthlessly implemented. In the Ukraine case, that didn’t before—or after—Russia invaded.

America and NATO could have deployed more forces to Ukraine to train and assist Ukraine’s military, joining those already there. Russian generals peering across Ukraine borders, could wonder what those new American flags meant. Considerably more weapons and ammunition could have been shipped to Ukraine at a far-more accelerated pace than was actually undertaken.

None of this happened. Instead, counter-productively, White House officials spoke frequently about imposing negative consequences for a “further invasion” of Ukraine, thinking themselves quite clever in not ignoring the 2014 attack. Ironically, however, their rhetorical flourish did just that, revealing critical deficiencies in their thinking, and confirming to Putin that there was no risk Russia’s actions in 2014 would be reversed. Opponents of raising Russia’s pre-invasion costs said so doing would actually provoke a Russian attack, as if that isn’t exactly what happened anyway. As Donald Rumsfeld observed, it’s not American strength that’s provocative, it’s American weakness.

Read More: How Zelensky Galvanized Ukraine and United the World

Western deterrence failed, but now Russian deterrence is enjoying unfortunately spectacular success. Building on Biden’s earlier voluntary rejection of U.S. military involvement, Russia has convinced the West that even a whisper of NATO military action in Ukraine would bring disastrous consequences. Putin’s directive enhancing the alert status of Russia’s nuclear forces brought on something approaching panic in the West, although there is no publicly-available evidence that Russia’s forces have operationally changed anything. A battle in and around the Zaporizhzhia nuclear-power facility also produced near-hysteria, but neither the IAEA nor the Pentagon detected any radiation leaks or damage to the reactor complex itself.

Desperate Ukrainian requests for a NATO no-fly zone over Ukraine have been flatly rejected. On Friday, Secretary of State Blinken said, “to actually implement something like a no-fly zone…could lead to a full-fledged war in Europe,” and “the only thing worse than a war that’s contained to Ukraine is one that escalates even further and goes beyond it.”

A woman crosses the destroyed bridgeas civilians continue to flee from Irpin due to ongoing Russian attacks in Irpin, Ukraine on March 08, 2022.
Diego Herrera Carcedo-Anadolu Agency

This logic is false, a classic non sequitur. It rests on the tacit, but manifestly incorrect, premise that even one hostile encounter between Russian and Western forces will escalate immediately to all-out, possibly nuclear, war. Obviously, there are risks in any NATO military role. But it is utterly wrong to say, because there are some risks, that every risk leads inexorably to massive escalation, much less that the West should therefore take no military action. There is ample distance between Step Alpha and Step Omega, and considerable room for maneuver.

Clearly, however, once again, Putin is getting much of what he wants from NATO for free. He threatens, he blusters, he used the word “nuclear,” and the West wilts. This is the very paradigm of effective deterrence. There are undoubtedly hard and dangerous choices to be made, but total military quiescence also imposes costs, strategic and humanitarian, which are now unfolding.

Predictably, hesitant Westerners are fearful of giving Russia a “pretext” for attacking NATO members. That argument proves too much. If Moscow needs a pretext, it has one already. Washington has long, and quite rightly, provided intelligence to Ukraine at a “frenetic” pace. The White House boasts that “this includes information that should help them inform and develop their military response to Russia’s invasion.” This intelligence may not, strictly speaking, insert the U.S. into Ukraine’s military “kill chain” (find, fix, track, target, engage, assess), but if Russia is merely looking for a pretext, it surely would suffice.

Further “pretexts” include the White House boasting to favored media outlets about the massive provision of anti-tank weapons and cyberwarfare assistance. Since Putin has already declared economic sanctions akin to a declaration of war, hesitant Westerners will likely resist further efforts at real deterrence even more strenuously.

Europe and America are indulging in considerable self-satisfaction about the economic sanctions deployed against Russia. But we should not feel serene that, although our deterrence broke down and Ukraine is being devastated, Russia is suffering severe punishment. The purpose of deterrence strategy is to prevent the conflict entirely, and there Washington failed badly. Worse, Russia’s prospects of prevailing against Ukraine are enhanced by its successful deterrence against NATO acting in ways that could effectively counter its aggression. This is nothing to celebrate. 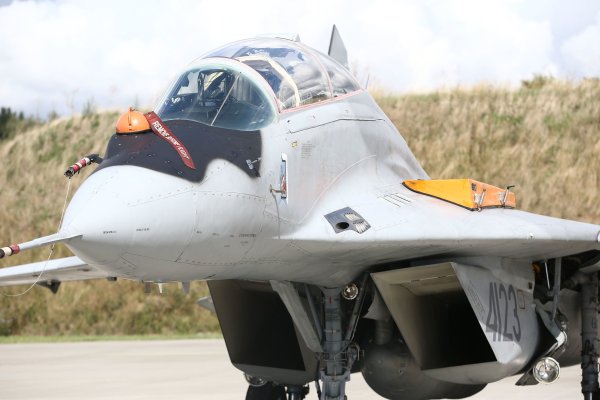 U.S. Shoots Down Polish Proposal to Get Warplanes to Ukraine
Next Up: Editor's Pick