A Ukrainian man rides his bicycle near to a factory and a store burning after been bombarded in Irpin, on the outskirts of Kyiv, Ukraine, Sunday, March 6, 2022.
AP Photo/Oleksandr Ratushniak
By Vera Bergengruen

Twelve days into his invasion of Ukraine, Russian President Vladimir Putin has “no sustainable political endgame,” the heads of U.S. intelligence agencies told Congress in a somber assessment Tuesday. That military reality means even greater humanitarian costs lie ahead, they said. “Putin is angry and frustrated right now,” Central Intelligence Agency Director William Burns told lawmakers at the House Intelligence Committee’s annual hearing on worldwide threats. “He’s likely to double down and try to grind down the Ukrainian military with no regard for civilian casualties.”

The U.S. intelligence leaders laid out their most blunt assessment yet of the war that has killed hundreds of civilians and forced more than two million people to flee the country, with testimony from Director of National Intelligence Avril Haines, Defense Intelligence Agency Director Lt. Gen. Scott Berrier, National Security Agency Director Paul Nakasone and FBI Director Christopher Wray. Despite the significant losses incurred by the Russian military, which has faced unexpectedly fierce resistance from Ukrainian armed forces, U.S. intelligence analysts “assess that Putin is unlikely to be deterred by such setbacks and instead may escalate,” warned Haines. “Putin feels aggrieved the West does not give him proper deference and perceives this as a war he cannot afford to lose,” she told lawmakers, adding that the Russian military “has begun to loosen its rules of engagement to achieve their military objective.”

But even if the Kremlin pursues a “maximalist plan,” U.S. intelligence analysts judge that it will be difficult for Russians to hold and control Ukrainian territory. Given the current situation, it would prove extremely challenging to “install a sustainable pro-Russian regime in Kyiv in the face of what we assess is likely to be a persistent and significant insurgency,” Haines said. U.S. and European leaders have made similar warnings in recent days. Tony Radakin, the head of the United Kingdom’s armed forces, declared on Sunday that Russian forces were being “decimated” by the Ukrainians. “Ukraine will never be a victory for Putin,” President Joe Biden said in a White House address on Tuesday. “Putin may be able to take a city, but he’ll never be able to hold the country.”

Moscow underestimated the strength of a highly motivated Ukrainian resistance as well as the severity of the Russian military’s internal challenges “which include an ill-constructed plan, morale issues, and considerable logistical issues,” Haines said. What was meant to be a rapid offensive was almost immediately hampered by supply problems. Hundreds of videos have shown destroyed Russian vehicles and captured Russian soldiers. Between 2,000 to 4,000 Russian soldiers have been killed so far in less than two weeks of fighting, according to Berrier, the DIA Director. The U.S. suffered 2,400 military deaths in 20 years in Afghanistan.

But U.S. intelligence chiefs also offered a frank assessment of Putin’s mindset, calling the war on Ukraine a “matter of deep personal conviction” for the Russian leader. “He has been stewing in a combustible combination of grievance and ambition for many years,” Burns told lawmakers. He noted that Putin is operating with a very small circle of advisers, and that the COVID-19 pandemic “made it even narrower.”

The threat of accidental or intentional nuclear escalation loomed over the hearing. “As Putin’s generals are being killed and he’s increasingly cornered, I would anticipate he would do increasingly desperate things,” said Rep. Jim Cooper, a Tennessee Democrat, echoing concerns expressed by other lawmakers. Putin sparked new fears when he took the unusual step of publicly declaring that he was putting his nuclear forces into “special combat readiness” on Feb. 27. At the same time, Ukraine’s nuclear plants have been caught in the crossfire between Russian and Ukrainian forces, and international officials have issued dire warnings about the risks. “We’ve never had armed conflict, in this way, with boots on the ground in a country with this configuration of nuclear infrastructure,” Rafael Mariano Grossi, the head of the International Atomic Energy Agency (IAEA), told TIME March 4, calling it “unprecedented.”

The U.S. intelligence officials cautioned against panic. While Putin’s announcement was “very unusual” and something U.S. officials said they had not seen since the 1960s, Haines said that they had “not observed force-wide nuclear posture changes that go beyond what we’ve seen in prior moments of heightened tensions.”

The officials also noted the potential fallout for countries that have aligned themselves with Putin. Chinese leader Xi Jinping and other leaders are “unsettled” by what they’re seeing in Ukraine, Burns said. “They did not anticipate the significant difficulties the Russians were going to run into,” he told lawmakers. “I think they are unsettled by the reputational damage that can come by their close association with President Putin; second by the economic consequences at a moment when they are facing lower annual growth rates than they’ve experienced for more than three decades.”

Xi has adopted a more cautious tone in his recent dealings. In a video conference with French President Emmanuel Macron and German Chancellor Olaf Scholz on Tuesday, he warned about the situation “spinning out of control” and said he was “pained to see the flames of war reignited on the European continent,” according to a readout from the Chinese foreign ministry.

The U.S. intelligence agencies are now focused on how Putin will respond to his initial miscalculations about Ukraine, about the West’s response, and about his own military. “He’s been proven wrong on every count,” Burns said, noting Putin’s underlying belief that Ukraine is not a real country. “He’s dead wrong. Real countries fight back. And that’s what the Ukrainians have done quite heroically over the last 12 days.” 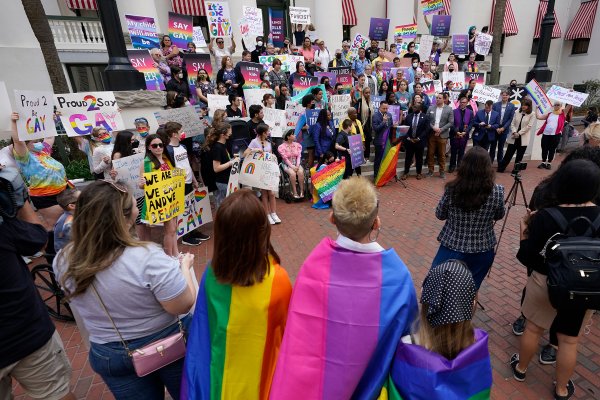 Florida Passed the "Don’t Say Gay" Bill. Here's What It Means
Next Up: Editor's Pick