When the Netflix documentary series Cheer was released in early 2020, its viral success made a follow-up season inevitable. The show, following an elite cheerleading team at Navarro College in Texas, became an immediate hit. But in the year after the show premiered, a disturbing scandal brought into question whether it would or even could continue. In September 2020, Jerry Harris, the fan-favorite Navarro cheerleader known for his exuberant positivity, was arrested on federal charges of production of child pornography and, later, sexual exploitation. Viewers felt betrayed, as did Harris’ teammates and coaches. Season 2 of Cheer addresses all of this, as well as personal accounts from two teen boys whose civil lawsuit against Harris had led to the initial criminal charges against him. He pleaded not guilty to the felony charges in December 2020.

The first few minutes of Cheer Season 2 begin with Monica Aldama, head cheerleading coach at Navarro College, reflecting on how tough the past year has been, followed by news footage about Harris’ alleged crimes. But after this introduction, the series rolls back the clock to January 2020, just a few weeks after the show premiered and a few months before the pandemic hit the U.S. It’s a golden era for the team, as several cheerleaders are now bonafide stars, taking photos, signing autographs and making Cameo videos on the side for extra cash. Harris is one of the biggest stars among them, and the filmmakers don’t shy away from showing just how much his fame grew, with clips of Harris on The Ellen DeGeneres Show, onstage with Oprah and interviewing celebrities on the Oscars red carpet.

Aside from the initial introduction, Cheer doesn’t directly address the allegations against Harris for the first four episodes of the season. Instead, it moves chronologically through the Navarro cheer team working toward the NCA National Cheerleading Championship until their season is abruptly canceled when COVID-19 hits. Episode five, titled “Jerry,” is dedicated to the charges against Harris, the reaction from his teammates and coaches, and a firsthand account from the two teenaged boys who first accused Harris. (Harris’ lawyers denied requests to be interviewed on camera, and have not yet made any statement about Cheer Season 2.)

Read More: Cheer Shows Competitive Cheerleading Is Almost as Dangerous as Football. So Why Isn’t It Officially Considered a Sport?

“Jerry” strikes a balance between centering the stories of the victims of Harris’ alleged sexual harassment and documenting the heartbreak of people who have recently learned that their friend or loved one is charged with a crime. Several of his teammates from Navarro respond to learning about Harris; Gabi Butler describes breaking down into sobs, and says that while she doesn’t condone his alleged actions, she still views him as family and wants to be there for him. La’Darius Marshall, who was especially close with Harris, is visibly angry about the situation, especially, he says, because Marshall endured sexual abuse as a child (which he discussed in Season 1).

Twin brothers Charlie and Sam (who are still minors and whose last name is not given) are interviewed at length in “Jerry.” They were the first victims to accuse Harris of sending sexually explicit text and social media messages, as well as asking one of them for oral sex. In a later interview with the FBI, Harris admitted to soliciting and receiving child pornography from 10 to 15 minors, according to prosecutors. When he was 13, Charlie alleges in Cheer, Harris began messaging him on Instagram; Charlie and his twin brother Sam were involved in cheerleading and knew of Harris due to his celebrity within the cheer community. The documentary doesn’t provide any new details about Harris’ case, but does give more insight into the emotional difficulties described by his accusers.

The twins say on the show that Harris also began messaging Charlie and he asked them for naked photos and videos. Their mom describes finding Harris’ messages in the archives of her son’s Snapchat account (some examples are also provided in the USA Today article that broke the story). Charlie also describes Harris cornering him in a bathroom at a cheer competition and begging him to have sex. Charlie says he ran out of the bathroom in disgust.

A painful response from the cheer community

Throughout Cheer, there is an overwhelming sense that these cheerleaders love and care about each other deeply, if for no other reason than the amount of time they spend with each other and the level of trust needed to flip into each others’ arms. But Sam and Charlie describe feeling ostracized from the cheer community after coming forward with their allegations. Other cheerleaders, they say, were mad at them because everyone loved Jerry Harris.

“After me and Sam spoke out, pretty much all sense of community was ripped away from me and Sam,” says Charlie in the documentary. “It was just terrible.”

Other people involved with Harris’ case appear in the episode, including Sarah Klein, an attorney for the twins. She is the earliest known victim of abuse by former US Gymnastics physician Larry Nassar. There is also background information from USA Today journalists Marisa Kwiatkowski and Tricia L. Nadolny, who broke the story about Harris and conducted a longer investigation into sexual misconduct within the cheer world.

Harris remains in custody at the Metropolitan Correctional Center in Chicago, where he has been since September 2020 as he awaits trial. If convicted, he faces a minimum sentence of 15 years. 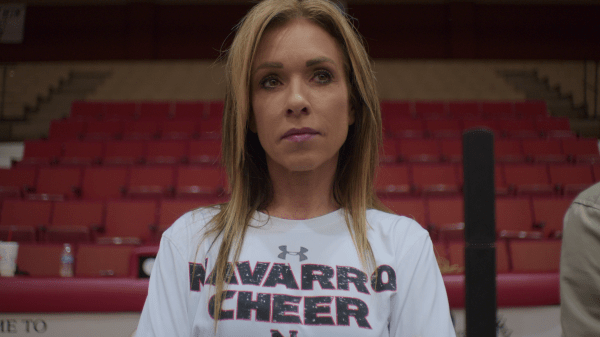 Where Cheer Season 2 Finds All Your Favorite Navarro Cheerleaders—Plus a Whole New Crew of Rivals
Next Up: Editor's Pick