The Danger of the Supreme Court Undercutting Biden’s Vaccination Rules

Ideas
By Carmel Shachar and I. Glenn Cohen

Shachar, JD, MPH, is the Executive Director of the Petrie-Flom Center for Health Law Policy, Biotechnology, and Bioethics at Harvard Law School.

Cohen is the Deputy Dean and James A. Attwood and Leslie Williams Professor of Law, Harvard Law School, and the Faculty Director, Petrie-Flom Center for Health Law Policy, Biotechnology & Bioethics

“There are three quarters of a million new [COVID] cases yesterday. . . [t]hat is 10 times as many as when OSHA put in this ruling. The hospitals are today, yesterday, full. . . . Can you ask us—is that what you are doing now—to stop this vaccination rule with nearly one million people, nearly three quarters of a million people, new cases every day?” This was the dramatic question asked on Friday by Supreme Court Justice Stephen Breyer of Scott Keller, one of the attorneys seeking a stay of an Emergency Temporary Standard (ETS) promulgated by Occupational Safety and Health Administration (OHSA) in the case of National Federation of Independent Business v. Department of Labor. This so called “Test-or-Vaccinate” mandate requires employers across the country with more than 100 employees to implement either vaccination or testing and masking policies for their employees. A majority of the Justices seem poised to endorse not only a temporary stay of the standard, but a permanent injunction against OSHA’s power to act, and the country will be worse for it.

As Justice Breyer noted, the ETS was announced by the Biden Administration in early November when the chances of our health care system being completely overwhelmed seemed less likely than it does at the moment. Almost immediately conservative groups organized to challenge the ETS. The U.S. Court of Appeals for the Fifth Circuit paused the implementation of OSHA’s regulation, citing concerns that OSHA overstepped its authority and that the mandate in question was poorly tailored. Later the U.S. Court of Appeals for the Sixth Circuit lifted that pause (a “stay”), arguing that a vaccine mandate could indeed fall under OSHA’s emergency powers to protect employees from “grave danger” in the workplace. The U.S. Supreme Court agreed to resolve the question on an emergency basis, hence the hearing.

Technically, the question before the Court is not whether the ETS is ultimately lawful or not, but whether the implementation of OSHA’s mandate should be stayed until the case can be fully litigated. But as the argument progressed it became more and more clear that the Justices would not avoid deciding the merits question: whether OSHA overreached when it issued the ETS.

Virtually all of the Justices had questions for the litigants regarding the “major questions doctrine,” a contested judicial rule for reading statutes that courts should “expect Congress to speak clearly if it wishes to assign to an agency decisions of vast ‘economic and political significance.’” In this case, the Justices jousted over the language of Congress’ Occupational Safety and Health Act which authorizes OSHA to protect employees from “grave danger from exposure” in the workplace. The debate was over whether the language was broad enough to encompass OSHA compelling certain employers to either require COVID-19 vaccinations or tests and masking for all workers.

Read More: Can Your Employer Mandate that You Get Vaccinated?

The major questions doctrine may sound like a dry crumb next to Justice Breyer’s admonitions, but how the Court applies the doctrine in this case could have even broader implications for our lives than the OSHA’s vaccination rule itself. At its heart, this is an argument over how much leeway federal agencies have to act or, as the Justices repeatedly put it in the argument, “Who Decides?” Justice Elena Kagan’s questions showed why federal agencies, which have significant expertise and can be held publicly accountable through presidential elections, should be given the leeway to take leadership positions on emerging issues such as vaccines to counter an unprecedented pandemic. Justice Neil Gorsuch’s questions, by contrast, suggested that Congress and State Governments should be the leader on major public health policies, noting that Congress has had a year to act on the question of vaccine mandates and chose not to. One answer to that challenge is that Congress has not acted because it gave that power to OSHA. A more realpolitik answer, though, is because there is no way the Democrats have the votes for such a law.

On its surface this is a case about vaccine mandates, but it is also a proxy war over the heart of the administrative state. If the Court applies the major questions doctrine in this case, that precedent will be used to constrain other agencies from acting in new, unprecedented dramatic situations, forcing them to wait for explicit authorization from Congress to act; authorization that may never come. Depending on what you think of the balance of power between Congress and the Executive that could be good or bad. But, if as it appears likely, the conservative Justices will block the ETS on this or an adjacent theory, the immediate casualty of this proxy war is the public’s health. The rule is estimated to save over 6,500 lives and prevent 250,00 hospitalizations over six months, although these estimates were pre-Omicron.

On Friday the Justices also heard arguments in Biden v. Missouri, a case focused on the vaccine mandate implemented by the Centers for Medicare and Medicaid Services (CMS). CMS requires all health care organizations who get Medicare or Medicaid funds to compel their workforce to be vaccinated, with no testing and masking alternative. Some states, including Louisiana and Missouri, challenged this regulation by obtaining injunctions against it. Mixed decisions from the U.S. Courts for Appeals of the Fifth, Eighth, and Eleventh Circuits mean that this regulation is now enforceable in some states but not others. Again, here the Supreme Court is tasked not with ultimately deciding if this regulation is lawful but instead if it should be paused as the litigation works its way through the judicial system.

The Justices were notably quieter during this argument, probably because it is clearer that this regulation falls within CMS’s authority. In her inimitably direct way, Justice Kagan captured the point: “All the Secretary is doing here is to say to providers, you know what? Basically the one thing you can’t do is to kill your patients. So you have to get vaccinated so that you’re not transmitting the disease that can kill elderly medical—Medicare patients, that can kill sick Medicaid patients. You can’t be the carrier of disease.” The CMS vaccine mandate is also easier to uphold because it is a condition of federal spending, and it is generally agreed that the Federal Government has more leeway to set conditions on the receipt of federal funds. Furthermore, most Justices seemed concerned that the States were not the right parties to be challenging this vaccine mandate. Chief Justice John Roberts and Justice Brett Kavanaugh both inquired as to why the States were bringing these challenges and not the hospitals themselves.

While reading tea leaves from oral arguments is always perilous, these arguments suggest that the Supreme Court is willing to upend the public health consensus that these federal initiatives are vital in favor of limiting the power of federal agencies. Some more narrow vaccine regulations will, like the one issued by CMS, likely survive because they are more closely tied to health care. But it is very likely that the Court may remove the most effective tool we have in combating COVID-19, comprehensive vaccine mandates that reach as many Americans as possible. That is a very high cost to pay in terms of sickness, hospitalizations, and deaths to change the balance of power between Congress and the Executive branch. 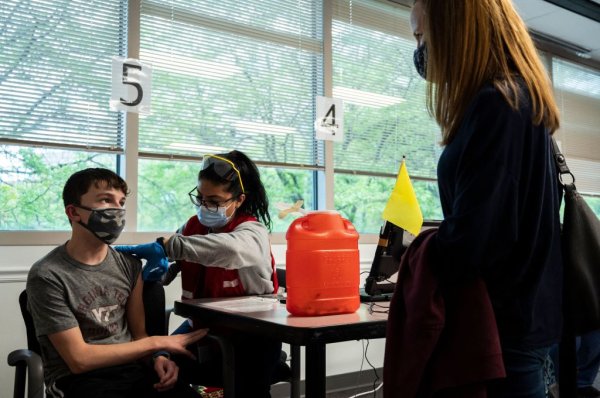 My Child Is Turning 12. Which COVID-19 Vaccine Should They Get?
Next Up: Editor's Pick