Augmented Reality is the Future of Online Shopping

When you open up Snapchat’s lens carousel, you’re greeted with a variety of filters that let you do everything from smoothing your skin to wearing a flower crown to dancing with a hotdog. Snapchat lenses have for years helped users create funny or glam photos and videos to send to their friends, but recently a more practical category of lens has been on the rise: augmented reality (AR) shopping.

One AR-powered shopping experience on the app lets users customize and virtually try on a pair of Nike Air Force 1s. Sponsored by the brand, the filter prompts you to toggle through and change the color (choose between shades like Magic Flamingo, Blue Void and Honeycomb) and texture (smooth or ripple leather) of 13 different parts of the sneakers before hitting the “try on” button to see a digital 360-degree overlay of what they would look like on your feet. If you like what you see, you can click “shop now” to immediately purchase the pair you’ve designed.

Integrating AR shopping directly into social media platforms is a savvy business move that’s made Nike—a brand that continues to find huge success among younger demographics—stand out in the surging social commerce market, says Ying Zhu, an assistant professor in the Faculty of Management at the University of British Columbia’s Okanagan campus whose research focuses on digital marketing, branding, consumer behavior, business analytics, and social networks. “Brands like Nike are likely to engage their younger target audience through social media and AR apps,” she says.

While Snapchat has led the way with integrated AR experiences, other social media platforms have recently expanded their in-app shopping offerings. In the past year, TikTok launched a feature with Shopify that allows users to shop directly from videos and retailer profiles, YouTube began pilot testing a livestream shopping feature, and Instagram introduced AR-powered makeup try-ons for brands like NYX, Urban Decay and Lancome as part of parent company Facebook’s partnership with L’Oréal and its AR beauty company ModiFace.

The spate of launches squares with a Jan. 2 report from consulting firm Accenture predicting that the social commerce industry will grow three times faster than traditional e-commerce over the next three years. According to the report, global social commerce sales—defined by Accenture as sales where the entirety of the shopping experience, from product discovery to check-out, takes place on a social platform—are expected to skyrocket from $492 billion in 2021 to $1.2 trillion in 2025. In the United States alone, social commerce is expected to more than double, reaching $99 billion.

With sales forecasted to soar so exponentially, augmented reality experiences that allow shoppers to virtually try on, personalize or visualize products—from clothing to shoes to makeup to furniture—have the potential to change the social commerce game for brands targeting tech-savvy consumer demographics. Accenture’s report predicts that social commerce growth will be driven primarily by Gen Z and Millennial social media users, with the two demographics accounting for 62% of global social commerce spending by 2025.

To attract these younger consumers, IKEA—which has its own AR-powered home design app, IKEA Studio—created a shoppable AR “escape room” game on Snapchat in February 2021, which allowed users to click through to shop for the very products they’re attempting to declutter from the virtual room.

“We know that serving AR experiences in different ways is key for customers as they become more engaged with different platforms and the digital world overall,” says Christine Whitehawk, IKEA U.S.’s marketing communications manager. “AR is a terrific way to give consumers an almost ‘real’ impression of what furniture will look like in their home—and considering how much time people spend in their home—they want to ensure it is just right.”

With social commerce opening up new avenues for reaching potentially massive markets, Accenture also concluded that the “social revolution” will see big brands facing growing competition from smaller businesses. On Snapchat, for instance, any brand or entrepreneur can easily utilize the platform’s built-in Lens Studio tools to create their own branded campaign. The sponsored lens will then appear in the carousels of users who fit the campaign’s target demographic.

Using social commerce is still somewhat onerous, even for regular social media users. If Instagram users want to test out different lipstick shades or eyeshadows using the platforms AR-powered makeover tool, for instance, they have to navigate to either a participating brand’s profile or the “Buy on Instagram” tab of Instagram Shopping, find a product equipped with the option and click the “Try with camera” button before even accessing the feature.

If they’re able to get to that point, the tool itself is pretty simple to operate. The virtual try-on for Lancome’s L’Absolu Rouge Drama Ink Liquid Lipstick collection, for example, prompts users to experiment with nearly 20 shades of lipstick using the front-facing camera to see how each one looks superimposed on their lips.

“If you want to implement augmented reality or, in a lot of ways, even just social commerce, your consumers have to be comfortable with technology,” Zhu says. “But you have to bear in mind that there are huge segments of consumers who are not tech-savvy. So if you’re part of a traditional industry and your target market is, let’s say, retirees, you have to be cautious.”

As the tech develops for more immersive and cohesive experiences, the window of opportunity is opening wider. An October 2021 survey conducted by market research company Bizrate Insights indicates that half of U.S. adults have either used or are at least somewhat interested in using AR or virtual reality (VR) while shopping. However, commercial success still depends on seamless integration of AR tech and the purchasing process, Zhu says.

“If I download five different augmented reality apps and every time I like something I can’t purchase it through the app, it’s not going to work,” she says. “Success isn’t just about the technology; it’s about the whole ecosystem. A brand’s creative content, payment system, supply chain and delivery system all have to be seamlessly integrated. You don’t want to jump from one AR app to another AR app and then have to go on the internet and type in the products to buy them one by one.”

Why China’s ahead of the game

This is part of the reason why the U.S. social commerce market is still in early stages compared to China, where livestream shopping on apps like WeChat, Taobao Live and Douyin (the Chinese equivalent of TikTok) is already a massively popular—and massively lucrative—social commerce tool. Accenture’s study found that while eight out of 10 social media users in China use social commerce to make purchases, the majority of social media users in the U.S. and U.K. have yet to make a purchase that way.

“While it’s been absolutely huge in China, social commerce has a very checkered history in the U.S. and West in general,” says Paul Marsden, a consumer psychologist who specializes in digital technology, brand communication, and shopper marketing. “And it’s the same with augmented reality. There are lots of AR apps, but they haven’t really gone mainstream. So the cynic would say that mixing two technologies that have failed to show they’re commercially viable to try and drive volume sales is not necessarily going to work.”

Technology, infrastructure and maturity of consumer technology knowledge are all behind in North America, says Zhu, noting that things are different in China, where almost everyone uses a smartphone to pay for their purchases.

“Because the whole society is using their phones so frequently and for any type of payment, there’s not much of a learning curve for using augmented reality or getting on a livestream or navigating any of those processes,” she says. “As much as you think that should be simple and easy, that’s unimaginable for a lot of older people in North America. The technology is not there and proficiency is not there.”

From a psychological standpoint, the COVID-19 pandemic’s continued acceleration of digitalized shopping could be what gives augmented reality its opening, Marsden says.

“If you’ve got a population that’s now at ease with using digital technology, then there’s not this psychological barrier of, ‘I don’t understand what to do!'” he says. “What people want when they shop is for it to be quick and easy, to get the best prices and to reduce risk. So if people perceive that augmented reality can reduce the risk of a purchase by keeping you from buying something that isn’t going to fit or you’re not going to like, then it possibly could take off.”

“The system is building up but [the question is], are society and consumers mature enough to accept everything?” she says. “Ten years from now, probably yes. Once Gen Z and younger teens grow up who are more comfortable [with the technology], I don’t see any challenge for them to be the driving force behind AR and VR.” 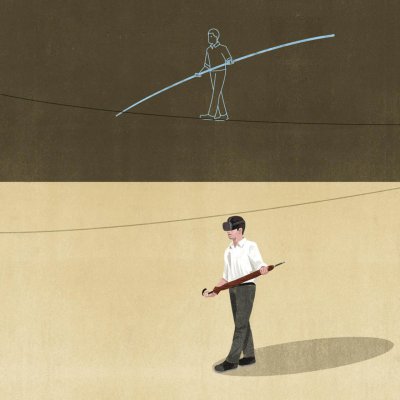 How Digital Twins Are Transforming the World
Next Up: Editor's Pick