Delia Ephron on Finding Love Again in her 70s

Delia Ephron is aware that her story sounds like it’s straight out of a movie. First, over the span of just a few years, the novelist and screenwriter suffered a crushing amount of loss. Her sister and collaborator, the acclaimed filmmaker and writer Nora Ephron, died of cancer in 2012. Three years later, she also lost her husband.

Then, in the months after her husband died, Ephron attempted to cancel his landline and accidentally crashed her Internet. She wrote about her heinous experience with Verizon customer service in a New York Times op-ed that resonated with a psychiatrist named Peter, who had also lost his spouse. Peter wrote Ephron an email, reminding her that they’d already met—Nora had set them up 54 years earlier. Ephron didn’t remember, but that didn’t matter. Soon enough, she was smitten.

The co-writer of You’ve Got Mail suddenly had a new love story of her own to navigate. In her forthcoming memoir, Left on Tenth: A Second Chance at Life, out April 12, Ephron describes their whirlwind romance—and the unexpected news that quickly changed everything: Ephron learned, four months after meeting Peter, that she’d been diagnosed with AML, an aggressive form of leukemia. “Everything big that could happen to me happened in a very short time,” Ephron says.

After undergoing a life-saving stem cell transplant, and navigating the depression that followed, Ephron decided to enlist a friend in helping her compile the emails, text exchanges and notes she had taken during those turbulent years. The result is a book that navigates the weightiest of topics—death, love, sickness and survival—in Ephron’s signature heartfelt and humorous voice. The writer spoke to TIME about her illness and recovery, the importance of being open to love at any age and why emails are so romantic.

Left on Tenth chronicles your leukemia diagnosis in 2017, five years after losing your sister Nora to the same cancer. Throughout the book, you repeat this mantra: “You are not your sister.” Do you still find yourself saying that?

I never said that to myself until I got sick and my doctors began to say it. They wanted me to believe that I could survive. Nora and I were so close. Being a younger sister, I tried to do everything she did when I was young. So the idea that they were saying to me, “You are not your sister” and I had to believe that, maybe, to survive, it was mind-blowing. I felt like I was betraying her. All they really meant was your disease under a microscope is different from Nora’s, so you can have a different outcome, but they knew how much my mind was bound up with my sister. It was empowering and it was traumatic, both things at once.

You describe in vivid terms what it was like to fall into a deep depression after your stem-cell transplant. What was it like to revisit that dark period in your life?

It’s a very bleak place to be—to be intensely depressed. You can’t be allowed by anyone to make decisions for yourself when you’re depressed like that. Peter knew he could not let me make a decision, and my doctors knew that I was not going to be in control. The most important thing is to let people who love you take care of you. I’m embarrassed to say this, but it was so joyful to write this book because I was able to take control of it. I was able to get to the other side of it.

Speaking of joy, you also tell the story of falling in love with Peter after losing your first husband to cancer shortly before your diagnosis. You wrote this about the first time you spoke with Peter on the phone: “We were both 72 and age meant nothing.” How did you come to realize that?

Life is about being alive to things, right? With me, I didn’t have a choice—I just fell in love. I must have been open to it. Some people are and some people aren’t, and having had a really wonderful marriage made me more trusting. I knew what it was like to fall in love. My mind was on Peter all day—I could feel the chemistry through the bone. We were emailing a million times a day.

You might not know this, but there is a great little rom-com movie about emails. What is it about emails that can be so romantic?

Oh! They’re playful and very spontaneous. It’s a little bit more than a text. It’s something you can shape. It’s not more romantic than endlessly talking at night on the phone, but there’s something about that feeling: you’ve got mail.

Your book beautifully blends these high, wonderful feelings with the very real darkness of loss. How has death changed your relationship with love?

We were 72 when we met. It’s right there—death is all around us all of the time. It’s some sort of defiance of it, as well as just thinking that you want to get every single thing out of life while you can get it. Peter makes every day better. It’s different to be older and fall in love—I know who I am. One of the hardest things about falling in love when you’re younger is you’re also trying to figure out everything else. 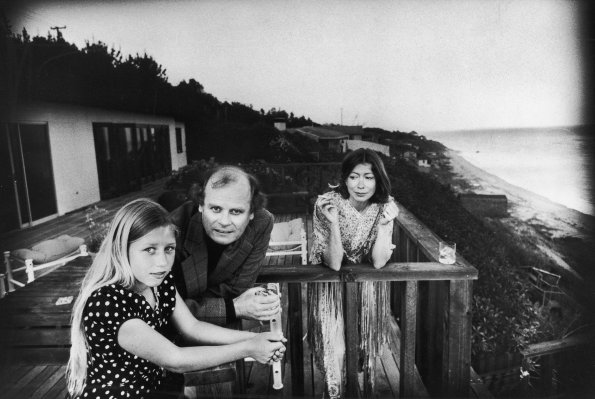 Joan Didion Wrote About Grief Like No One Else Could
Next Up: Editor's Pick