Why Older Couples Don't Need Marriage to Have Great Relationships

Getty Images
Ideas
By Francine Russo
Russo is the author of Love After 50: How to Find It, Enjoy It, and Keep It

When Rochelle Ventura, a retired election consultant, married at age 22, she felt, she says, “like a domestic slave.” Now 83 and living with Phil Doppelt, 82, a retired software engineer, she says, “We’re equals. At the start, I explained dinner was not my responsibility to plan every night.”

They divide their time between her home in Los Angeles and his in San Jose, keeping their finances separate. For more than a decade now, they’ve found love and joy together without marrying. “In my marriage, I felt I wasn’t my own person,” she says. “I felt stuck. Now if I want to leave, I can. But with Phil, I can’t imagine wanting to leave.”

Ventura and Doppelt are riding a social and demographic wave. In the last two decades, the social landscape for older couples has undergone a revolution: As Bowling Green sociologist Susan L. Brown says, “Older adults are at the forefront of family change.” Between 1990 and 2010 divorce rates after age 50 doubled and remain at record levels, she says. The result? More older singles.

Read More: Why You Shouldn’t Love Your Kids More Than Your Partner

Whether they find each other online, at the gym or at church, they are pairing up in unprecedented numbers and in untraditional ways. Remarriage rates over 50 have remained steady, Brown says, but cohabitation in that age group has more than quadrupled between 2000 and 2020. Numbers on LATs (long-term committed couples “living apart together”) are scarce, but sociologist Huijing Wu of the University of Western Ontario found that in 2011 of unmarried but partnered adults from Wisconsin over the age of 50, about a third were LATS.

What’s different about these couples is not just how they partner. Boston University sociologist Deborah Carr has done preliminary analyses of older re-partnered couples and says they are likelier to be more equal financially, more autonomous as individuals and freer of gender roles. “The same seems to be true,” Carr says, “whether they are remarried or cohabiting.” Carr has not studied LATs. However, autonomy and equality are built into the very structure of living apart together.

Changing social attitudes are also part of the picture, Carr says. Cohabitation was once stigmatized as “living in sin” or lesser than marriage. Even if some still disapprove, many older adults don’t care. A typical attitude: I’m 60 years old, and I’ll do what I damn please.

Read More: Being Single Was Just a Part of Their Lives Before the Pandemic. Then It Became the Defining One

What really makes these couples different is what they’re not doing—raising children or building their fortune together. Many keep their finances separate even if they’re married. According to Pennsylvania certified elder-law attorney Tammy A. Weber, that’s true for more than 75% of her clients,. Most want to pass their assets to their kids. Some want to retain Social Security benefits or alimony from a former spouse. But fiscal impacts are only part of why they keep their money separate.

Financial planner Maryan Jaross, 68, of Louisville, Colo., for example, built a successful career post-divorce and with it, her “independence and autonomy,” she says. “I sure as hell didn’t want to give it up. I can buy a pair of shoes even if I have a hundred pairs.” She lives happily with Tom Lepak, 65, who works in sales for an industrial construction firm. For this and other reasons, she’s built a legal wall between their finances.

There are many women like Jaross, economically independent, able and determined to have equal relationships. She loves to cook, but Lepak does the clean-up and laundry. He makes the bed and does the yard work, which he enjoys. They hire people to do what neither wants to do. “That we don’t have kids under foot and obligations is huge,” she says. “Being a couple is a different mindset now.”

Partners like these also feel no obligation to operate as a unit when they visit family, see friends or travel. Jaross and Lepak, for example, see some of their children separately, some together. He’ll spend a week with his brother in the East; she’ll visit her aging mother in New York for a month. Sometimes they travel separately, as do Doppelt and Ventura. This fall, while Ventura tours Cuba with women friends, Doppelt will be hiking in South Dakota with five other guys. “I feel it’s O.K. to travel separately,” he told me. “I’m not sure I would have felt that when I was married before.

Couples who live in their own homes (and expect to for the rest of their lives) have the least traditional relationships and the most freedom. Living apart lets them sidestep possible conflicts over all the habits, needs and people in their lives they’ve gathered over the decades. He’s a morning person and she sleeps late? No problem. He needs the thermostat at 65° while she’s miserable unless it’s 75°? Not an issue. Her grandkids regularly run wild over the house? Hey, it’s her house. Many have lived on their own for years and require their solitude and space.

Jeff Ostroff, host of the podcast Looking Forward, lives apart in suburban Philadelphia from the woman he calls “the second love of my life.” Ostroff, in his late sixties, operates on his own schedule, spending time on work, on social media, exercising, volunteering, and with his friends and his kids. He and his girlfriend of more than six years talk and video-chat several times a day, sometimes for more than an hour at a time but usually see each other only on weekends. Having his time alone during the week, he says, means he can then devote himself to her “almost 100%.”

What really sets these couples apart, whether they marry, live together or apart, is the emotional texture of their relationships. They have passed through life’s major transitions—like having kids or an empty nest—that often change people. They know who they are and what they need. They understand what’s important to them and what isn’t. As University of Colorado Denver sociologist Teresa Cooney found in comparing later-life remarriages to first marriages, these older couples are better at problem solving and argue less.

While older adults feel no pressure to re-partner, if they choose to, they select a mate who fits who they are now. As one happily cohabiting woman told me, she thought her first husband would be a great father, and he was. But he was not the right mate for midlife and beyond. Couples who partner in later life choose each other exclusively for the relationship, for the love, companionship and emotional support it provides.

University of Haifa psychologist Chaya Koren finds that in the older remarriages she studied, each spouse felt more like an individual within their relationship, fostering both greater equality and deeper intimacy. Time acts on older couples in a paradoxical way, says Stockholm University sociologist Torbjörn Bildtgård, who studied romantic unions after age 60. On one hand, they have more leisure time together. On the other, they know their remaining years together are limited. They feel immense gratitude to have found each other. They cherish their love.

Lepak expresses it this way. “Rather than worry about our end,” he says, “we try to make the most of each day we have together. We feel blessed that we’ve found our soul mate.” 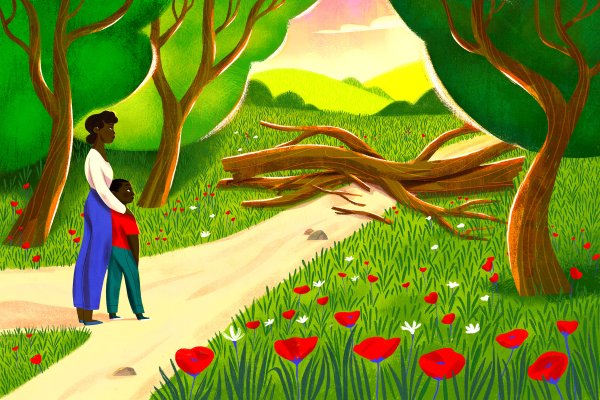 My Child Was Vulnerable Long Before the Pandemic. But the Wait for a Vaccine Is Excruciating
Next Up: Editor's Pick