The Most Anticipated Albums of 2022

These days, trying to forecast the biggest pop and rap albums for an entire year is a fool’s errand: most major stars either drop their albums by surprise or set deadlines that they then miss. It’s entirely possible that Beyoncé, Kendrick Lamar, Frank Ocean and Rihanna release their long-awaited projects in 2021; it’s also possible we won’t hear from them for another half-decade. At any rate, here are some of the most intriguing albums that we do know, with some certainty, will be arriving in the next twelve months.

Tyler the Creator’s longtime compatriot is a hip-hop trendsetter in his own right. A brooding lyrical technician and a head-­spinning sonic experimentalist, he often seems to float his words hazily over his soul samples. Earl says these songs, written during the pandemic, “are what happened when I would come up for air.”

After a few years out of the public eye, the indie-rock powerhouse returns with a collection of songs that, true to form, pair elegance with existential dread. “I used to think I’d be done by 20,” she sings on “Working for the Knife.” “Now at 29, the road ahead appears the same.”

Everything Was Beautiful, Spiritualized (Feb. 25)

The British shoegaze icons return with their ninth studio album, then tour Europe and North America.

The English songwriter has cycled through several musical identities over her decade-long career: mainstream hook belter, sulky pop-punk princess and now hyperpop figurehead. (Charli herself, perhaps not surprisingly, says she doesn’t identify with music genres.) Her latest album features a Who’s Who of the pop avant-garde, including Caroline Polachek, Rina Sawayama and Oneohtrix Point Never.

Known as the Five Foot Assassin, the rapper from A Tribe Called Quest became a hip-hop legend in the ’90s for his raspy flows, punchy one-liners and infectious enthusiasm. He died in 2016 from complications related to diabetes. His posthumous album will be released six years from the date of his death, and features collaborators like Busta Rhymes and Redman.

The Dawn, The Weeknd (TBA)

What comes after After Hours? The Dawn, obviously. The most recent Super Bowl performer said in October that his fifth studio album was essentially finished, and that it was inspired by artists ranging from Britney Spears to Nas.

Even as Rosalía has become one of the world’s biggest stars, she’s kept her avant-garde impulses both in music and visual style. So don’t expect her to aim for the center on her upcoming album. “I didn’t begin my career by making hits,” she told Rolling Stone. “I think I’ll try to continue working like this … making music I believe in.” (TBA)

Where We Started & Country Again Side B, Thomas Rhett

Last year, the Georgia-born superstar scored yet another No. 1 U.S. Country Airplay hit with “Country Again.” He recently announced not one but two albums slated for 2022. (TBA)

The unruly, genre-bending, self-described boy band has gained a cult following over the past few years. But their next album will be their last as a unit. “Everybody just getting a lil older and got a lot to say outside of group projects,” leader Kevin Abstract explained.

While Cardi B constantly gets bombarded on social media with requests for a new album, the Bronx rapper is taking her time. “I think I’ve got like 50 songs recorded, and I’m just still not satisfied,” she said last February. Since then, she’s dropped verses on two hits: Normani’s “Wild Side” and Lizzo’s “Rumors.” Don’t be surprised if the album packs just as much firepower.

Lizzo faces a tall task in trying to replicate the Cinderella success of her last album, Cuz I Love You: she scored a pack-leading eight Grammy nominations in 2020, with the single “Truth Hurts” inescapable for months. While the numbers for her latest single, the bubbly “Rumors,” pale in comparison to those of her prior hits, the song still has a cool 90 million Spotify streams and counting. 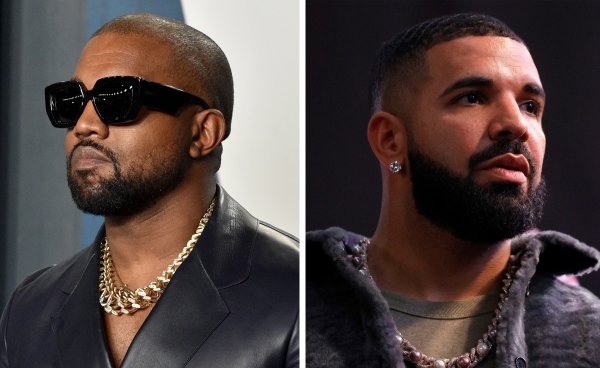 The Most Memorable Moments of Kanye West and Drake's Reunion Concert
Next Up: Editor's Pick