Waiting for a Kanye West album can be an excruciating, interminable experience. For years, the rapper has set release dates with his label, only to blow by them with no acknowledgment or notice. At times, West appears to enjoy toying with his overeager fanbase: “Might not come when you want, but I’m on time,” he rapped on 2016’s “Feedback.”

His latest project, Donda, has proved particularly elusive. It was first scheduled to come out last summer before being shelved indefinitely; there was an album cover until there wasn’t; there was an accompanying film that also disappeared into the ether. All the while, West was making headlines for other disconcerting reasons, including a chaotic failed presidential campaign and manic-depressive Tweetstorms.

Last week, West packed eager fans into the Mercedes-Benz Stadium in Atlanta for what was supposed to be a listening party, and proceeded to play rough cuts of music that were so loud to be nearly indiscernible. He then retreated back into a makeshift studio–that was reportedly inside the stadium itself –and set up a continuous livestream that showed him and his collaborators doing a lot of other things besides making music, including lifting weights, getting haircuts and sleeping.

But on Thursday, West hosted another listening party at the same arena and this time delivered a much more fleshed-out, hour-plus version of the album, filled to the brim with gospel-inspired beats and A-list rap stars including Jay-Z and the Weeknd. While the album has still yet to arrive on streaming services, there’s plenty to analyze and discuss from that event’s audio and video alone. Here’s what we know about Donda.

Kanye West has never been shy about being a mama’s boy. Her voice is included on his debut album The College Dropout; he dedicated a whole Oprah performance to her in 2005, singing “Hey Mama” as she sat beaming in the front row. But two years later, she died from complications related to plastic surgery, sending West into a tailspin; he said he blamed himself for her death. In 2014, West released one of his most wrenching songs, “Only One,” from his mother’s perspective in heaven.

And Thursday evening’s version of Donda kicked off with audio of one of her speeches, in which she joked about being her “son’s mother” and stressed the importance of their ancestors: “As one writer said, we came from somewhere. Not just from the wombs of our mothers and the seeds of our fathers, but from a long line of generations who came before us.” Donda’s presence weighs heavily throughout the album. “Mama, you was the life of the party… When you lost your life, it took the life out the party,” he raps on one song. In one interlude, he wields her voice as a sample–not unlike his use of Afromerica in his 2010 film “Runaway”–while agonizing in autotune about losing his own family, Kim Kardashian-West and their children. Another interlude consists solely of a female voice repeating the word “Donda” dozens of times.

Over the last two weeks, a bevy of rap stars have tweeted excitedly about flying to record in West’s makeshift studio in Atlanta, while others could be seen wandering into the studio livestream. The result, at Thursday’s event, was an embarrassment of riches. Donda relies early and often on some of West’s closest collaborators, mentors and mentees: he trades crisp bars with Pusha T, cedes the floor to Kid Cudi’s morose melodic musings and gives Travis Scott a hyper-charged beat to bark over.

The album also bridges generational, regional and stylistic divides, with West embracing some of rap’s brightest present and future stars from across the country. Playboi Carti delivers his signature Atlanta absurdism; Fivio Foreign and the late Pop Smoke amp up the project’s energy with Brooklyn drill. The pop-rap star Roddy Ricch—who had a minor spat with West when Ricch criticized West for urinating on West’s Grammy last year—croons about that awards show, while Conway the Machine and Westside Gunn, two members of the cult favorite Buffalo rap group Griselda, contribute classicist street talk.

But perhaps the most notable feature is Jay-Z, the rap legend with whom West has had a tumultuous two decade-plus relationship. West detailed the first decade of their saga together on his song “Big Brother,” in which he reckoned with trying to step out from Jay-Z’s shadow. A few years later, they would team up to create the world’s foremost hip-hop duo with Watch the Throne, touring to ecstatic fans all over the world.

But their relationship has become rocky in recent years: While fans began speculating that tension was brewing between the two following their joint album, it wasn’t confirmed until 2016, when Kanye went on a lengthy rant about Beyoncé and Jay-Z onstage during a concert in Seattle during the Saint Pablo tour. A year later, Jay seemingly called out Kanye for the outburst in the lyrics to the track “Kill Jay Z” from his 2017 album 4:44, where he rapped: “But you got hurt because you did cool by ‘Ye / You gave him 20 million without blinkin’ / He gave you 20 minutes on stage, f-ck was he thinkin’?/ ‘F-ckin’ wrong with everybody?’ is what you sayin’ / But if everybody’s crazy, you’re the one that’s insane.” Later in 2017, Kanye left Tidal, despite being an early artist partner, amidst alleged reports that he believed the company owed him $3 million. The strain on their relationship also had seemingly had deeply personal roots; in a 2018 interview with the radio host Charlamagne tha God, Kanye talked about how he was hurt that Jay-Z and Beyoncé didn’t attend his 2014 wedding to Kim Kardashian.

Despite this history, Jay-Z appears to gesture towards reconciliation on his verse. While he first criticizes West’s political choices—“Hold up, Donda, I’m with your baby when I touch back road / Told him stop all of that red cap, we goin’ home”—he then immediately concedes his own flaws: “Not me with all of these sins, casting stones / This might be the return of The Throne.”

While Donda is perhaps not as single-minded in its mission as West’s latest album, the pseudo-gospel Jesus is King, it still clearly puts West’s faith in Christianity at its center. “What they vandalize, He’ll evangelize, uh / He gon’ part the tides, He gon’ part the skies,” he repeats on song. On another, he proclaims euphorically: “Guess who’s going to jail tonight? God gon’ pay my bail tonight.” West also coaxes pious verses out of colleagues, including Jay Electronica, Jadakiss, and Roddy Ricch.

It’s not just the lyrics that rely on Christianity: the sound of the album is deeply indebted to the church, with whirring organs driving many of the beats. The gospel singer the World Famous Tony Williams, and West’s Sunday Service Choir, who performed with him at religious ceremonies throughout (2020), also make appearances.

In 2018, West visited the White House in a MAGA hat and delivered an instantly notorious 10-minute monologue to President Trump and the press, touching on topics from North Korea to bipolar disorder. Ostensibly, however, he was there to talk about prison reform, and plead for the release of Larry Hoover, a founder of the Chicago gang the Gangster Disciples who is currently serving six life sentences for a slew of charges including murder, extortion, and running a criminal enterprise while in jail. “It’s very important for me to get Hoover out because in an alternate universe, I am him,” West said during the visit.

On Donda, West recounts that day with a one-liner: “I went to the White House and said, ‘Free the old man.’” Later in the album, he gives Hoover’s son, Larry Hoover Jr., two minutes unencumbered to talk about his experiences. “We have been looked at and treated as criminals for being a part of this family,” Hoover says, adding about his father: “The conditions in this capitalist society is what made him, and it is what made the children of today.”

Kim Kardashian, who filed for divorce from Kanye in February, attended the first listening party for Donda in Atlanta, along with their four children and her sister, Khloé Kardashian. Kim and the kids also were in attendance at the second Donda listening party, with Kim even donning a black Balenciaga outfit to match Kanye’s.

On a song revealed during the second listening party, which fans are referring to as “Never Abandon Your Family,” Kanye seemingly reflects his now-defunct relationship with Kim: “I’m losing all my family, darling, come back to me.” In a haunting track featuring The Weeknd and Lil Baby that fans are referring to as “Hurricanes,” Kanye laments: “Heated by the rumors, reading into it too much/ Fiendin’ for some true love/ I asked Kim, ‘What do you love?’”

On the song that fans call “Lord I Need You,” West appears to look back on their relationship wistfully: “You know you’ll always be my favorite prom queen / Even when we’re in dad shoes or mom jeans.” But he also seems to acknowledge that the relationship is over: “It’s gone different in a different direction lately / Tryna do the right thing with the freedom that you gave me.”

Kanye’s new album isn’t the only hot commodity. After sporting a red puffer jacket to his first listening party, the same style was revealed to be a new offering that was previously offered in blue and black from his much-hyped Yeezy x Gap collaboration. The jacket, which retails for $200, was sold via pre-sale; according to former Gap CEO Mickey Drexler, sales for the jacket clocked in at $7 million in just one night. 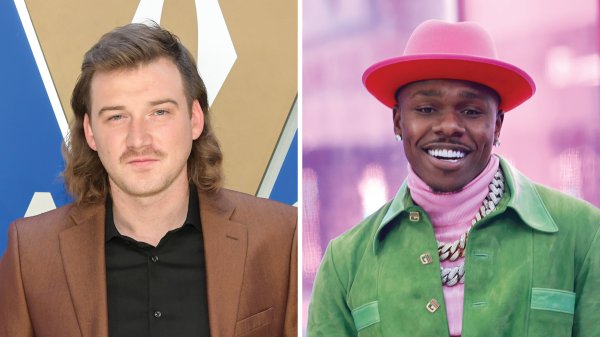 After Being Blacklisted, Morgan Wallen Is Bigger Than Ever. What Will Happen to DaBaby?
Next Up: Editor's Pick