How the Pandemic Could Finally End the Mommy Wars

What does it mean to be a good mother? For most of my life, I’ve received conflicting answers to this question. Growing up, my parents revered mothers like mine, who walked away from a career in medicine to stay at home with me and my four siblings. On our way to school and soccer practice, we listened to The Dr. Laura Program, which opened with a kind of battle cry for stay-at-home mothers: “I am my kid’s mom.” My dad once bought my mom a hat embroidered with the tagline. “Damn right,” she said as she popped it on over her graying brown hair.

Elsewhere, I heard the opposite message: that stay-at-home mothers squander their talents by taking on a role of dependency in their households. Or, as Elizabeth Wurtzel once wrote in The Atlantic, that stay-at-home motherhood is a failure of feminism. “Real feminists earn a living, have money, and means of their own,” she wrote.

Read More: My Kids Can’t Get Vaccinated Yet, and I’m Barely Keeping It Together

When I became a stay-at-home mother, no one accused me of being an anti-feminist, but antipathy manifested in offhand comments and dismissive remarks. Once, while discussing my decision to stay at home full-time, a pregnant friend told me she sympathized with the idea but couldn’t imagine herself “doing nothing” for a year or two. Another mom acquaintance told me she needed to work because she wanted to feel like she was “contributing” to her household. I chalked it up to the so-called Mommy Wars, which never seemed to end.

The havoc the pandemic has wreaked on parents has shed harsh light on the political and economic forces drawing the battle lines in the Mommy Wars. Millions of mothers were pushed out of the labor force. Millions more were left struggling for breath in it. And as weary mothers find themselves continually abandoned by policy makers, more of us are recognizing that any frustration we feel toward each other is misdirected.

Like a lot of divisive cultural debates, the Mommy Wars began on a college campus. It was 1990, and Wellesley College had invited the first lady Barbara Bush to speak at the school’s commencement. The decision upset many students, prompting 150 of them to send a petition to the school’s president arguing that as a stay-at-home mother known largely for her husband’s achievements, Bush did not represent the kind of career woman Wellesley encouraged its students to become.

The incident brought the growing tensions between mothers who stayed at home and those who worked into the national spotlight. “These are the Mommy Wars,” declared Newsweek, calling it the defining feud of the decade. Two years later, the New York Times reported that the wars had “spilled into the national political arena, with Marilyn Quayle championing the fact that she gave up her law career for the sake of her family, and Hillary Clinton defending her decision to combine the two.”

But by the time it was my turn to decide what kind of mother I would be, it hardly seemed like a choice at all. I was still in graduate school when I gave birth to my eldest. Managing school and first-time parenting wasn’t easy, but I had a lot of control over my schedule. As graduation approached, a fellow student told me his boss, a state senator, was looking to hire someone with experience in tax-policy analysis. It was a promising job, but involved the chaotic hours of an entry-level political aide, and with a 9-month-old daughter at home, I simply wasn’t up for it. I never interviewed, and instead returned to my old job doing research for a small nonprofit. The hours were better, but the pay was too low to cover childcare for more than one kid, so when I had my second, I left the labor force entirely.

I didn’t mind being a stay-at-home mother, but the doorless hallway that led me there left me frustrated by the lingering disconnect between working and stay-at-home moms. The furor had certainly quelled since the 1990s as working motherhood became the norm. And yet, even as mothers spoke more openly about the unique difficulties of balancing work and childrearing in America, many people continued to frame stay-at-home motherhood as a “choice” or a “privilege.” Others still remonstrated women for “choosing their career over their children” without ever questioning why employers demand so much of their employees that it has to be one or the other.

Then the pandemic struck, revealing with a sudden clarity just how little agency any of us has when it comes to balancing our commitments to our work and to our families. As daycares and schools shut, parents’ domestic responsibilities expanded, and in keeping with pre-pandemic trends, it was mothers who shouldered the additional childcare, homeschooling and housework. Millions of mothers were shoved out of the labor force as a result. “Society will call it a choice,” wrote Lyz Lenz here in TIME, “when in reality, it’s a failure of the system.”

In the midst of this cultural awakening, it became increasingly clear that policies that support working mothers were long overdue. At the same time, the challenges of stay-at-home motherhood got more visibility. It became harder to deny that caring for children is work, even when it’s unpaid. That the very same conflict between domestic responsibilities and employment that makes life miserable for mothers in the labor force has been pushing others out of it for decades. And that belittling those domestic responsibilities only gives employers and public policymakers license to ignore rather than accommodate them.

Along the way, high-profile working mothers began to extend olive branches to those of us who looked at the deal the American labor market offers mothers — reduced pay, limited career advancement, no paid leave or help with childcare, and some of the longest working hours in the developed world — and decided it wasn’t worth it. In September, for example, Katherine Goldstein and Jo Piazza wrote in Romper that we should “retire the phrase ‘working mom,’” because all moms work and it doesn’t help moms in the labor force to pretend otherwise. “We now realize that our feelings of superiority came from buying into a sexist narrative. Paid employment isn’t the only kind of valuable work and it does not make someone a different category of mother,” they wrote. Explaining her decision to step down as editor-in-chief of Workingmother.com, Audrey Goodson Kingo wrote for HuffPost that when the pandemic struck and suddenly 80% of her income went to childcare, her own articles encouraging mothers to keep working even when it didn’t make short-term financial sense offered her no comfort. “They angered me,” she wrote. For this stay-at-home mother, these were welcome overtures, and I think it’s time we officially called a truce.

I am not so naive as to think that we’ll all live in harmony from here on out, or that policy makers and pundits won’t continue to argue over where women’s work is most valuable—as they did in the debate about the refundable child tax credit this year, for example—but here on the ground, among real mothers, the animosity seems to be dissolving. In its place, something like solidarity is forming as more of us recognize that, employed or not, we are all doing our best within a system that was not built for us.

Perhaps I’m being overly optimistic, but I hope not. There is more to be gained by rallying against our common enemies than fighting each other. 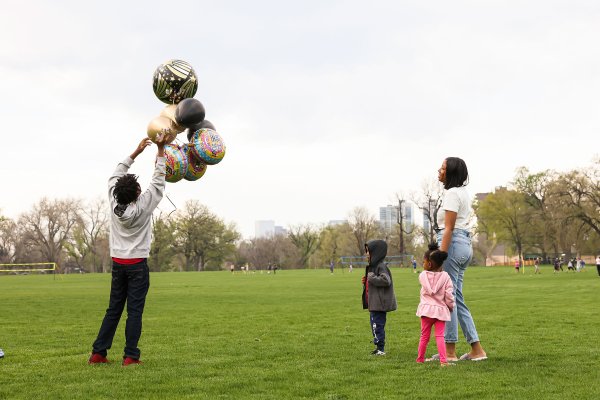 Watch: TIME's Best Short Documentaries of 2021
Next Up: Editor's Pick