How Trump Stole Christmas—And Why Evangelicals Rally to Their Savior

A Dallas Police Mounted Unit stand outside of the old First Dallas Baptist church as Trump supporters and members wait in line for Sunday morning service with former President Donald Trump, on Sunday, Dec. 19, 2021 in downtown Dallas.
Ben Torres
Ideas
By Samuel L. Perry
Perry is an associate professor of sociology at the University of Oklahoma. He has written two books on Christian nationalism including Taking America Back for God: Christian Nationalism in the United States (with Andrew Whitehead) which won the 2021 Distinguished Book Award from the Society for the Scientific Study of Religion and The Flag and the Cross: White Christian Nationalism and the Threat to American Democracy (with Philip Gorski).

Before Donald Trump had spoken a word Sunday, Dec. 19, at First Baptist Dallas it would’ve been understandable if those in attendance had trouble remembering the “reason for the season.” Jesus was celebrated, yes. But the entire Christmas service was built around Trump’s advent: lines wrapped around the building starting 3 hours before the event; security screening for everyone in the main sanctuary; Trump’s smiling face on every program. The former President was introduced or acknowledged four separate times during the service, each one to thunderous applause.

Senior Pastor Robert Jeffress, frequent Fox News guest and longtime Trump advocate, gushed with adulation for his “good friend,” a friendship he proudly counted as “one of the greatest privileges of my life.” He twice called President Trump “the most pro-life, pro-religious liberty, pro-Israel President in the history of our great country” and dubbed him “the most consequential President since Abraham Lincoln.” Trump even found his way into Jeffress’s sermon as an analogy for God himself. When Jeffress wanted to illustrate what it meant for God to pardon sin through Christ, he recalled Trump pardoning Alice Johnson in the Oval Office.

And finally, there was in Jeffress’s own words, “the climax of the service,” Trump’s “Christmas Greeting” that turned into a MAGA rally. The delivery and content were classic Trump, alternating between off-the-cuff rambling about the nation’s dystopic situation and remarks about Christmas that he confessed were written for him. He concluded with his signature “Make America Great Again” sign off and even began a chant for “USA! USA!”

A program from the What If There Were No Chrismas? event on Sunday December 19, 2021.
Courtesy Samuel Perry

Attending the event in person allowed me to appreciate how central Trump remains to white evangelicalism. Not just for Robert Jeffress, Trump’s most loyal “court evangelical.” Not just for First Baptist Dallas, the church that once wrote and performed a hymn for Trump entitled “Make America Great Again.” In fact, it would be a mistake for readers to roll their eyes at an event like this and dismiss it as “wacky” or “fringe.” On the contrary, what I observed in person Sunday morning, as well as what we can see from national survey data, make clear how Trump has conformed white evangelicalism to his own image, and why so many evangelicals await his second advent.

Standing in line 2.5 hours before the event, I chatted with a group of five elderly women who all came together. All were committed churchgoers in the Dallas area, but none were members at First Baptist. They simply came to see Trump. And they were planning to all get tickets for the event with Bill O’Reilly at the American Airlines Center later that afternoon where Trump would also be speaking.

There was Bill, a repairman who had taken public transportation to get to First Baptist. He was not a member either, but had always been a huge fan of Trump and was eager to see him in person. He is unvaccinated because he didn’t trust the science, heard the vaccines caused blood clots, and read somewhere the Omicron variant wasn’t that bad anyway. He was also convinced the election was stolen and said he would vote for Trump again in 2024.

And there was Carlos. Like Bill, Carlos was visiting First Baptist from elsewhere in the city along with a friend. And also like Bill, Carlos was certain the election had been stolen from Trump. But Carlos didn’t think Americans should wait for the 2024 election. Speaking to his friend loud enough for all to hear, Carlos explained “Trump should be reinstated and made President for life. Because he should be for life.”

Trump’s appeal Sunday morning extends far beyond the First Baptist faithful. Evangelical visitors from around the city had come to cheer for their President. They were convinced he’d been treated unfairly. And they pined to see him back in office.

National data show us this is not a fringe view among white evangelicals. In survey data my colleagues and I collected in August 2021 and are currently analyzing, over two-thirds of white evangelicals felt the 2020 election had been stolen from Trump. And 63% believe the liberal media wildly exaggerated the threat of COVID-19 to damage Trump’s chances at re-election. Nor do white evangelicals blame Trump for the attempted insurrection at the Capitol Building on January 6th. As of August 2021, a full 70% disagree that Trump held any responsibility for the event.

For the vast majority of white evangelicals in the U.S., like those visiting First Baptist Dallas on Sunday, Trump is still their warrior. And his promises are still the same as those he made as a candidate in 2016: that he would fight for Christians like them.

Introducing the former President, Jeffress recounted what initially attracted him to Trump as a candidate in 2015 was that Trump passionately defended the Christmas holiday and promised to make it politically correct to say “Merry Christmas” again. The narrative of a politically correct “war on Christmas” is a farcical right-wing trope that goes back decades, but Trump was able to leverage this narrative to present himself as a candidate who would fight for Christian culture.

That’s how he presented himself on Sunday. Recalling how Jeffress first described him to others, Trump paraphrased Jeffress: “[Trump] may not know the Bible as well as all of us, but he loves God, he loves Jesus, and he’s a leader, and he’s going to lead us into great things, in helping and saving Christianity.”

What did he mean by “saving Christianity”? He means rescuing Christianity’s influence, and more specifically the cultural and political influence of white conservative Christians. Trump’s appeal to white evangelicals at First Baptist church and around the country is primarily the result of what we call “Christian nationalism,” the belief that America has been and should always be for “Christians like us.” Trump reassured listeners Sunday of the centrality of Christianity to America’s story and his commitment to defend that centrality.

Reading his remarks, Trump exclaimed, “It’s impossible to think of the life of our own country without the influence of [Jesus’] example and of his teachings. Our miraculous founding, overcoming civil war, abolishing slavery, defeating communism and fascism, reaching boundless heights of science and discovering so many incredible things…And the United States ultimately becoming a truly great nation and we’re gonna keep it that way. We’re not going to let it go.”

That is the promise of MAGA. It’s the reason the vast majority of white evangelicals elevate Trump and what his possible return as President means for the future of the country. 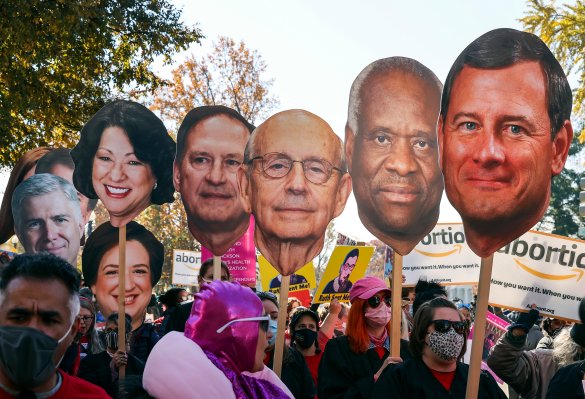 A 'Mississippi Compromise' on Abortion Would Threaten All Our Freedoms
Next Up: Editor's Pick