Bali Reopened to Foreign Visitors. It Got Only Two in the First Month

A man carrying a surfboard walks on an empty beach in Kuta on the Indonesian resort island of Bali on August 14, 2021, as social restrictions due to the coronavirus hit the island's tourism industry.
SONNY TUMBELAKA/AFP via Getty Images
By Grace Sihombing / Bloomberg

Wayan Sentiani, 36, is earning barely a tenth of what she used to from selling t-shirts and sarongs near Kuta beach. For about a decade, she would get up to 2 million rupiah ($140) a day from mostly Australian, Chinese and European shoppers.

“Yesterday, I opened the shop from 7 a.m. until 7 p.m. and only sold a piece worth 75,000 rupiah. Most of our days here go by like that,” Sentiani said. “I really hope the foreign tourists will come back soon.”

Two months since reopening its borders to international arrivals, Bali seems a long way from returning to its days of fully-booked hotel rooms, busy restaurants and crowded beaches. In October, only two foreign visitors arrived, compared with half a million in the same month in 2019, and not a single direct international flight has landed on its shores since.

Hopes for the return of tourists are being eroded by the island’s restrictive quarantine measures and fears of a fresh virus outbreak. This year-end holiday season will serve as a key trial for Bali — if the current curbs can keep the virus under control, the government might ease curbs further to let its tourism sector rebound faster.

“We are like sailing between two reefs: health and economy,” said I Gusti Agung Ngurah Rai Suryawijaya, deputy chairman of the island’s chapter of Indonesian Hotels and Restaurants Association.

An employee wipes a chair by the swimming pool with disinfectant at Four Points By Sheraton Hotel in the Kuta area of Bali, Indonesia, on Friday, Oct. 29, 2021.
© 2021 Bloomberg Finance LP

Entering Bali is more difficult than other beach destinations in the region. Travelers from overseas must apply for a visa that requires a local sponsor, hold an international health insurance and quarantine for at least 10 days. That’s a stark contrast to places like Thailand’s Phuket and Vietnam’s Phu Quoc that let inoculated visitors from some countries enter without quarantine.

Indonesia has enough reason to be especially wary of another virus spike. It battled one of the world’s worst outbreaks after the Eid al-Fitr holiday in the middle of the year, leading to the death of more than 140,000 people. The country’s vaccination program has also fallen behind its neighbors with less than 40% of people fully inoculated, rendering it more fragile to another resurgence.

Bali’s economy bears the brunt of that vigilance as it shrank 9.3% in 2020, the worst among all of Indonesia’s provinces. Its gross domestic product fell 3.4% in the first nine months of this year.

For PT Bukit Uluwatu Villa that runs luxury resorts on the island, that means no expansion plans until there are clear signs of an economic rebound. Its Alila resorts, including one perched on a cliff overlooking the Indian Ocean and another designed by Kerry Hill in Ubud, have average occupancy of about 13% in November, from as high as 73% in 2019.

With the rate likely to rise only to 30% next year, the company isn’t planning on hiring new workers either, said Corporate Secretary Benita Sofia.

Bali’s hotels and restaurants are pinning their hopes on the upcoming G20 meetings to bring in more visitors, with government officials extolling the island’s features in their speeches and inviting people to attend side events.

Read More: Climate Change Won’t Kill Tourism, But the Industry Is in for a Reckoning

Online hotel reservations signal better days ahead. In the week ending Dec. 5, the number of bookings were 57% lower than in the same period in 2019, an improvement from August when it was 80% less, according to market research company YipitData.

That’s barely enough to keep Made Yogi Anantawijaya’s transport business afloat. He left his job as a finance ministry official a decade ago to start the venture with his brother, but the pandemic has forced him to restructure loans, reduce workers and sell off several buses and cars to keep going. Now, orders are starting to trickle in, mostly from domestic travelers.

“Foreign tourists are still zero,” said Yogi, 38. “What keeps us alive are the local tourists now.”

—With assistance from Claire Jiao and Arys Aditya 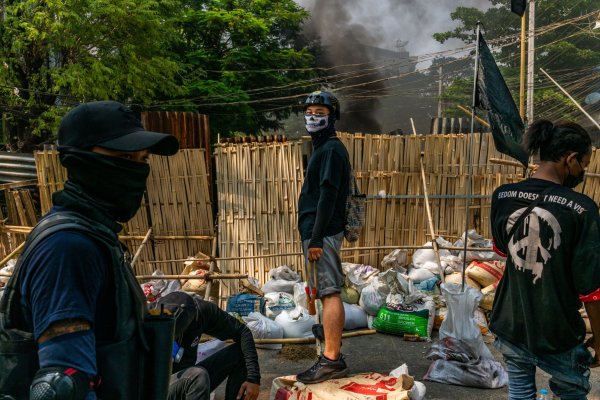 The U.S. Threatens More Sanctions on Myanmar
Next Up: Editor's Pick