Climate Change Won't Kill Tourism, But the Industry Is in for a Painful Reckoning

A firefighter battles with fire during a massive wildfire which engulfed a Mediterranean resort region on Turkey's southern coast near the town of Manavgat on July 29, 2021.
Ilyas Akengin—AFP/Getty Images
By Ciara Nugent

Turkish tour guide Erkan Sehirli likes to take his American and European visitors to the gulf of Gökova region on his country’s southwestern coastline. Together they hike trails that pass through ancient ruins, overlooking picturesque bays where cruise ships drop their guests for lunch. Sold as “the place where green meets blue,” Gökova is an upscale, boutique destination and one of the region’s most beloved natural attractions.

Or it was, until wildfires tore through the area in late July amid one of the worst heat waves to hit the southern Mediterranean in decades. “You can’t be there any more. It’s all grey. It’s like walking on the moon,” Sehirli told me over the phone from the nearby town of Bodrum last week. “One day you’re in heaven, and the next day everything is gone.”

This summer, the climate crisis has made itself increasingly visible through a torrent of extreme weather events across the world, and the places we go to get away from it all have not been spared. The Mediterranean fires have destroyed landscapes and forced dramatic evacuations from beach resorts in Turkey, Greece and Italy. Germany’s historic floods have washed out mountain trails in Bavaria. A historic drought in the western U.S. has forced inns in Mendocino to rely on portable toilets, and vacation operators in Arizona to cancel houseboat bookings for dried up Lake Powell. These events are a kick in the teeth for local tourism industries that are just beginning to recover from COVID-19.

They’re also a sign of the sector’s extreme vulnerability to climate change. The growing number of natural disasters each year—which have already quadrupled between 1970 and 2016—are threatening the natural and cultural heritage that tourism destinations rely on to lure in visitors. Warming global temperatures are lengthening the period of summer that is unpleasantly hot in beach resort regions, and shortening ski seasons in mountain retreats. Rising sea levels are eroding beaches in coastal communities. Increasing water scarcity in warmer regions is sowing potential for conflict between locals and the resource-intensive tourism industry. And some travelers are beginning to confront the looming question of whether or not to keep flying when the technology to decarbonize aviation is decades away from being used at scale.

A reckoning for the tourism industry could come soon. In July, G7 leaders threw their weight behind a burgeoning movement in the finance world for mandatory climate risk disclosure, which would force companies and their financiers to tell investors how their business is exposed to climate change. The tourism industry is “not at all” prepared for the level of risk that process might expose, says Daniel Scott, a professor of Geography and Environmental Management at Canada’s University of Waterloo, who has spent two decades researching the interaction between climate change and tourism. “They’ve got to do a lot in the next little while—probably the next three to five years—to understand both what the changing physical climate means for them, but also the transition to net zero”

Climate change won’t necessarily kill tourism. The industry has proved adept at adjusting its seasons and offerings to suit new weather patterns. Canada’s Whistler ski resort, for example, has been so successful expanding its snow-free activities that it now makes more money in the “green season,” Scott says. In Turkey, Sehirli still has plenty to show visitors outside of Goköva, like the ancient city of Ephesus. And, if the unpleasant heat of late summer stretches further into September, he says he expects Europeans and Americans will just start coming more in winter.

But climate instability will disrupt the industry in painful ways. And unfortunately, everything points to the biggest losers being those with the fewest resources. Because it opens up flows of foreign exchange and encourages investment in local infrastructure, tourism is often touted as a route to prosperity and stability for struggling countries. According to the U.N., it is a principal export for 83% of developing countries and the biggest export in a third of them. Development experts often call the industry the largest voluntary transfer of wealth from rich to poor, with the sums moved dwarfing aid budgets.

Where the tourism industry relies on coasts and other areas of natural beauty, it may be particularly vulnerable to climate impacts, like sea level rise, glacier melt or extreme weather. Low-lying island nations in the South Pacific are losing their beaches to sea level rise and their coral reefs to ocean warming. In the Himalayas, snow and glacier melt is making the mountains more hazardous and destroying the ecosystem’s natural beauty. In the Caribbean, where tourism makes up 20-30% of GDP in many countries, research by the World Travel and Tourism Council (WTTC) has found that the unusually strong 2017 Atlantic hurricane season cost the region 826,100 visitors, who would have generated $741 million. The storms triggered hikes in insurance premiums of up to 40%, increasing a key cost for the area’s hotels.

There will be some winners in this dynamic. For example, destinations with cooler climates, like Scandinvavia, could welcome more visitors as they warm. And across the globe, larger companies with deeper pockets might be able to weather increased costs of doing business, and spread their risk across different destinations. But more than 80% of the tourism industry is made up of small and medium-sized businesses, per the WTTC. They may struggle to survive if they lose physical assets to extreme weather or if the risks of a more volatile climate drive up the cost of doing business.

There are solutions to stem the damage, like coastal adaptation to protect communities and landscapes that draw tourists. Better forest management can reduce the spread of wildfires. Government financial support can help small businesses bounce back when disaster strikes.

But for those of us lucky enough to travel abroad, the ethics of vacationing are getting ever more complicated. Should I fly on a fossil-fueled plane to a Caribbean island so my tourist dollars can help rebuild part of the local area that was recently destroyed by a hurricane? Should I patronize a coastal restaurant and enjoy carbon-intensive surf and turf as their beach is washed into the ocean? Should I just stay home and send my money abroad? Probably, yes. But will I? 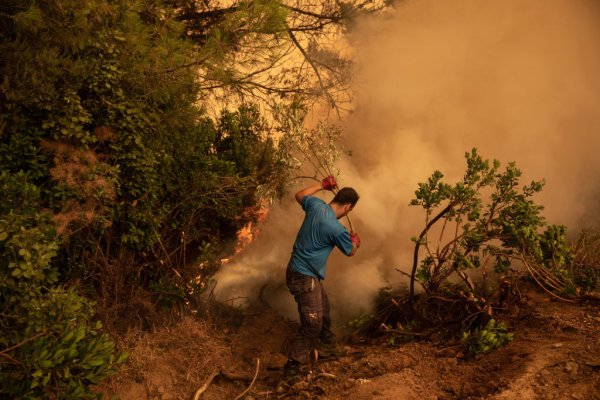 In the Face of Climate Change, We Must Act So That We Can Feel Hopeful—Not the Other Way Around
Next Up: Editor's Pick